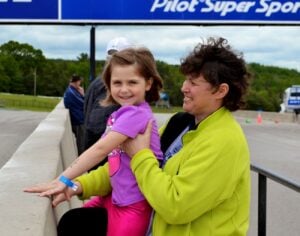 Little Chelsea, coming to the end of her treatment in a few months enjoying watching her friends race around the track and eagerly waiting her turn with Jill Clements-Baartman.

One chilly day last winter I received a very welcome and unexpected call from an enthusiastic gentleman by the name of David Forbes.  I have the honour of coordinating the Pediatric Cancer Program at Hearth Place Cancer Support Centre, and magically, David found us.  Our program started only two years ago with two families and has now grown to thirty.

David told us about the Porsche Club and how they would like to coordinate with us and take children with cancer to Mosport, not to watch, but to participate by riding on the track with an experienced driver in beautiful, fast cars. This was a dream come true for these children. An occasion to have some fun, take some time out and really be the kid that they are. There was so much excitement and anticipation at Hearth Place. 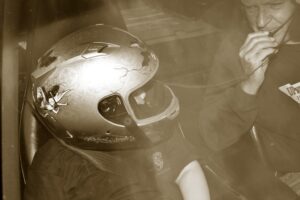 Young Owen in his third year of treatment at Sick Kids, enjoying the company of not only an accomplished driver but also a volunteer for the Cancer Society.

To date we have been to Mosport twice and it’s all the children can talk about. One father emailed me after our first session saying, “Thank you very much for coordinating a great race day for the kids—It is deeply appreciated. Although there are some bad days, due to chemo, drugs or just general malaise…the good days, with events like Saturday at Mosport, help make the difference in the battle.”

Further to this parent’s comments, on our first outing to Mosport a very special young boy called Aiden was unable to attend. He was in SickKids all the previous week and was too sick to join his friends on track day. He was hopeful that he would make it out in time for the June track day and he managed to check out of SickKids at 7:00pm the night before, and was the first to arrive at the track on the Saturday morning. His picture, with his enormous smile, really says it all! 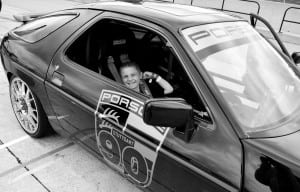 Aiden, released from Sick Kids at 7:00pm the night before. Thrilled and happy to be the first at Canadian Tire Motorsport Park the next morning.

Another young boy, Michael, is coping with fourth stage Hodgkin’s lymphoma. He enjoyed a terrific day with his driver Suzanne, and has since decided that racing is definitely on his ‘life’ agenda. His father also wrote a note of thanks saying: “I am not sure how we, as parents, and Michael can ever express our thanks to those that give their time and support to all of us!!  Please express to Suzanne and the team how much Michael appreciated her sincere concern and more importantly their willingness to provide Michael and the other children with the thrill of a lifetime!!!!!!”

These children can go through long treatment protocols lasting two to three years. This often robs them of their early childhood or teen years where they should be enjoying sports, parties and friends, but are often isolated by the very nature of the disease. The stresses on the rest of the family can become taxing. Siblings are often left with friends or family and feel left out and neglected as well as worried for their brother or sister. Parents feel guilty spending so much time away from their other children as well as blaming themselves somehow for their child’s illness. All too often they suffer financial distress (one parent has to be with the child most of the time) and ongoing concern over the child with cancer. 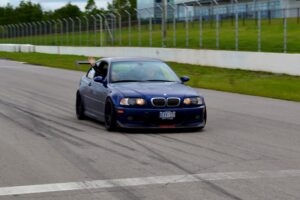 Michael, having the thrill of a lifetime after experiencing many months in treatment at Sick Kids it is wonderful to get away from it all!

When a group reaches out to offer support, as the Porsche Club has, it can make a world of difference to these families. They see their child have a day packed with fun, laughter and thrills, which is an incredible gift, not only to these families but also for Hearth Place. As an organization, we are so grateful for what you are doing. You are helping by giving something positive through a time that can be such a struggle on those very dark days!  Thank you!!