Last month we reviewed how to learn new tracks by applying a simple but very effective methodology courtesy of racer and writer Alan Johnson. We applied this methodology to a track most of us know quite well–CTMP (Mosport) in order to provide a baseline for any development it might provide. Johnson’s methodology simplifies every track into three types of turns, Type I, Type II, and Type III. Our previous article covered the most important of the three; Type I. This month we’ll focus on the remaining Type II and Type III.

Previously, we learned that Type I turns have the highest priority because these corners lead to a straight. The longer the straight, the higher the priority that turn obtains within the collection of Type I turns found on the track. Since our objective is to produce as much speed as possible on the straight, Type II turns are the next most important type because the driver will want to preserve as much of that speed as possible. Therefore, by definition, Type II turns are found at the end of a straight. In a Type I turn we try to get on full throttle as soon as possible, which tends to favour braking early with a late apex. By contrast, a Type II turn motivates braking late, and apexing early to carry that momentum into the turn. Let’s evaluate which corners at CTMP are Type II and III. 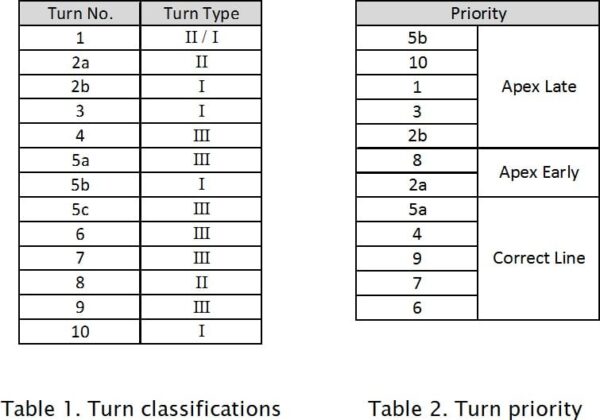 Referring to tables 1, and 2, we notice that there are only two Type II turns at CTMP. It’s important to remember that Turn 1 leads to a straight therefore it needs to be treated as a Type I even though it lies at the end of the front straight.

Turn 2 is, in my opinion, the signature turn at CTMP. Taken correctly, it’s extremely gratifying. With the recent run-off expansions, it’s lost a bit of its pucker factor but the biggest improvement has been the repaving of the tire loading-zones within the turn. Before we apply the methodology, let’s first describe what the driver experiences going through Turn 2. This corner is a double apex, off-camber with a massive elevation drop between the apexes, of which the first apex is blind. Only the first apex of Turn 2 is a Type II turn. Since it’s a blind apex, committing early contributes to the correct line.

There’s a ditch next to the first apex that we used to put our front left tire into, but the repaving makes the car hop now. The stiffer your suspension, the wider you’ll hop–to a full car’s width if you’re running a Cup suspension. Recently, I’ve been using the edge of the ditch as my target.

An entire article can be written on how to approach and drive through turn 2, but for the purposes of this piece, we’re simply interested in making the driver aware that turn 2a is a Type II which motivates just enough braking to balance momentum with apexing early. A rolling tire has more grip than a sliding tire. Therefore, the objective is to scrub off just enough speed to prepare the car for the early apex. Given 2a is just on the other side of hill, braking for this first apex also involves loading the car so it doesn’t become too light cresting the hill. I’ve experimented with simply lifting to scrub off speed, but that usually involved getting off the throttle much earlier, instead of squeezing the brake closer to turn-in. Simply put, the longer you’re on the throttle, and quicker on the brake, the faster you’ll go.

The other Type II turn is 8. This corner has been a focus for me this season. It’s been taught by our instructors as a double apex, and as a late single apex. Personally, I feel more comfortable taking it as a double, with an early first apex. The last third of the back straight leading to turn 8 is intoxicating. Most cars are approaching redline in 5th gear passing under the bridge. All that speed often gets tossed away by braking too early, or too hard for turn 8. I have to admit, I’ve been black flagged for running off trying to explore the most aggressive braking point I can manage with a downshift to 4th gear leading into 8. But when you get it right, there’s no better feeling. It may just be me, but high-G right hand turns seem more hairy probably because the driver feels like falling out of the car instead of into it.

Getting ready for Turn 8 requires being about a car-width from the left side of the track as you pass under the bridge. The driver can actually point the car towards the first apex just as braking commences. This promotes braking in a straight line towards your target. Carrying speed through the first apex of 8 is not only important because it’s a Type II turn, but also because turn 8 is uphill. A car going uphill has more grip. It takes a while for drivers to trust the physics to not only preserve momentum but also apply throttle up through the rest of 8. Johnson does write that the driver shouldn’t be worried about downshifting or anything other than braking as late as possible in a Type II turn. I wouldn’t recommend this for Turn 8. I’ve tried taking it in fifth gear by simply braking going into 8a, but you feel like more of a passenger than a driver approaching 8b. This technique also requires finesse in terms of matching revs shifting from 5th to 3rd prior to Turn 9.

The remaining corners; 5a, 4, 9, 7, and 6 are Type III turns. Typically, Type III turns lead to a Type I turn. Therefore, it’s important to maintain a line that promotes the best possible acceleration out of the Type I turn that usually follows.

I find it interesting that Johnson’s methodology is extremely consistent with the advanced driving instruction we receive at CTMP in terms of achieving the perfect lap. Knowing this provides us with a unique tool by which to approach and embrace new tracks.

Keep the shiny side up. See you trackside.

It’s All In The Details