By pcaucr
Part I of a series – Type I turns

There’s a peculiar anticipation and apprehension in exploring new tracks. Ideally, the quicker you can learn how to get the most of out the track in terms of car balance and speed, the sooner you’ll find your rhythm, and the sooner you’ll start enjoying the venue.

A great way to learn a new track is to break it down into meaningful components. Understanding which corners are more important than others allows you to maximize your experience each lap by developing consistency. Consistency leads to smoothness, and we all know smooth is fast—and safe.

Earlier this year I got to experience the circuit at Mont Tremblant for the first time. In preparation for the event, I studied the track map, and whatever online videos I could find. However, apart from learning the flow, the videos underrepresented the amount of elevation change the track provides. The real gains in understanding the track came in two forms; some excellent track notes from our Chief Instructor, Stephen Goodbody, and a fortuitous ride with an American instructor David Kane. Although Stephen’s notes were inch perfect, I found them somewhat overwhelming at first. It wasn’t until after David’s simple explanation of how to dissect a track that I was prepared to absorb the finer details of Stephen’s notes.

Unfortunately, we won’t always have access to such amazing track notes. Depending on your schedule, you might not have been able to participate in one of our DE track walks, which are the next best thing. I’d like to pass along what I learned from that weekend, and some subsequent research to share some simple yet important concepts.

David’s advice that day was based on the classification of turns by racer and writer, Alan Johnson. According to Johnson, there are three types of turns; Type I, Type II, and Type III. In this article (the first of a series) we will focus on the most important set, Type I.

A Type I turn leads to a straightaway. Type II turns are those found at the end of a straight. Lastly, Type III turns comprise everything else. Simple enough, but it’s not quite that easy. Let me explain why, using Mosport (CTMP) as our working example.

CTMP is made up of more than one straight. Johnson’s guidance goes on to tell us that the longer the straightaway, the more important, or the higher priority the Type I turn leading into it becomes in relation to other turns on the track. By now, most experienced drivers reading this have already pegged the back straight, the front straight, and the run up to and over Turn Four as the longest straights. Below is a table that lists each corner by turn type, and their corresponding priority. 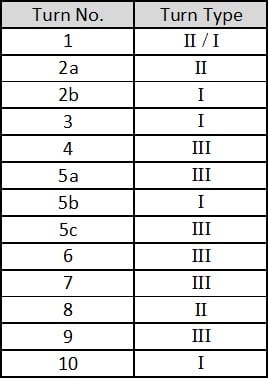 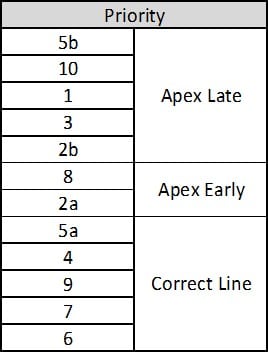 Referring to Tables 1 and 2, a bit of analysis is required to differentiate each straight and corresponding set of turns. However, now that we know which corners represent Type I turns, and which priority to assign to them, we’ll now focus on how to best prepare ourselves for them. The following principles apply to Type I turns:

I’m assuming the reader understands the natural track line, but in case you don’t, the natural line around the track is one that attempts to straighten out the corners, enabling the driver to carry as much speed as possible around the circuit. To accomplish this, turns are approached from the outside edge of the track, passing through the geometric centre of the inner edge of the corner known as the ‘apex’, followed by exiting the corner by ‘tracking out’ to the outer edge of the pavement.

The underlying objective of a Type I turn is to build as much speed as possible entering the straight. This will enable higher speeds at the end of the straight. Let’s look at each of the principles above, individually.

Setting the balance of the car early more often than not requires braking early then loading the wheels that are delivering torque. For almost everyone reading this, it will be your rear tires, including later model 911 turbos, and C4(S)s. The later you brake, the more you’ll need to master smooth heel-and-toe shifting to shorten the work zone leading up to the turn. Balancing the car prior to the apex allows for early application of throttle to build up as much speed as possible while the steering wheel might still be pointed in.

A late apex will provide the longest trajectory down track past the turn. This enables maximum throttle to be applied. A late apex refers to the delay in turning in, which is past the geometric apex of the turn. Typically, a late apex is two thirds the way around the turn towards the end of inside curbing. The exciting thing about CTMP is the high number of blind apexes. Depending on your line, there could be as many as five. Hence, you’re committing the car to the late apex without actually seeing it

To achieve maximum exit speed, not only does the throttle need to be applied early, but the steering needs to be opened up as soon as possible. When you enter a turn, the front wheels act as passive brakes. Anyone who has pushed a shopping cart with a damaged front wheel knows how much more effort is required to move the cart forward when the front wheel refuses to stay straight. On a track, novice drivers have the tendency to unwind the steering wheel too slowly by following the turn all the way around. Opening up the steering should be mated with smooth application of the throttle ending in full throttle just prior to the steering wheel being straight. The more powerful your car is, the more you’ll have to develop this relationship.

Using these principles for Type I turns, let’s determine how they apply at CTMP. From Table 1, we’ve identified corners 5b, 10, 1 and 3 as being Type I turns. Turn 5b has the highest priority because it leads to the longest straight. Turn 2b has the lowest priority, but still has priority over a Type II turn which we will cover in a subsequent article.

To get 5b right, you need to have the correct line through 5a. Your entry to 5a may vary depending on how much speed you carry through 4. The faster you go through 4, the earlier you’ll be forced to apex 5a. As you can see, every turn is influenced by the one preceding it. I find the challenge with 5b to be getting the car straight prior to the apex curbing. It’s a tight space with a short work zone. It’s important to understand the pivot point of your car when trying to maximize setting up for 5b. Rear engine, rear wheel drive 911s have their pivot point under the front axle. Mid-engine Caymans and Boxsters have a pivot point very close to the geometric centre of the vehicle, as do 944’s with their front engine, rear transaxle configuration. Therefore, trying to apply maximum throttle as close to the apex as possible will be a challenge for 911s. Depending on your setup, it sometimes feels as though the entire car is sitting on the left rear tire at this point.

Turn 10 is similar to 5b in the fact that a Type III turn precedes it. Knowing Type III turns are the lowest priority, the objective setting up for 10 is pick a line that achieves maximum exit speed as close to apex as possible. The later you apex Turn 10, the more straight track at exit you will see, and the more throttle you can apply. Full throttle at the apex will bring you out to the exit curbing.

Turn 1 is one of my favourites because it’s a combination of Type II and Type I. We’ll get into Type II turns in next month’s article, but for now, it’s important to know that Type II turns, which occur at the end of a straight demand maximum momentum into the turn. Therefore, Turn 1 is a compromise of going deep to carry speed as well as setting up early to apex late. The actual apex of Turn 1 is often way beyond any cone that is set up for lapping days. The sweet spot is actually a depression in the pavement about 3 feet past the storm drain at the end of the curbing—very close to the concrete wall on the right. Setting up early for this turn allows early throttle application way before the storm drain. Done correctly, you’ll feel as though you’re being shot out of the turn, and you’ll need all of the track upon exiting. It’s worthwhile noting the track falls off camber near the end of the exit curbing. It takes a lot of confidence to keep the pedal down as the car tracks out here.

The only point I’ll make on turn 2b at this time is that you can be full throttle way before the actual apex. Given 2a is a Type II turn, your line leading up to 2b should allow for a trajectory that allows full throttle through 2b to the exit curbing of 2. We’ll go into greater detail on turn 2 next month.

Turn 3 is another classic corner at CTMP. Blind apex, elevation and camber change. To get the most out of turn 3, the same Type I principles apply. Set the car up early. Third gear seems to provide the best torque band through the turn, but 4th gear can be used if you’ve overcooked the entry. It seems to me a lot of drivers get on the throttle too late approaching the apex of turn 3. Many are not at full throttle until three or four car lengths past the apex. The exit of turn 3 actually has a lot of track to accommodate getting on the throttle early. A shift up to 4th gear should be required before the exit curbing if you’ve maximized torque through the turn.

So, to sum up Type I turns, try to remember; if the corner leads to a straight…apex late.

I Can’t Believe They Did That!