Home »Provinz»Life in the Fast Lane 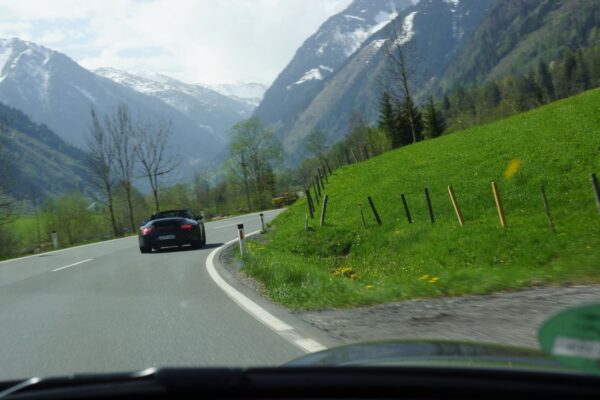 “OK Eagles, let’s fly” ordered our lead driver over the radio. We had just passed our first of those fabled German Autobahn signs with three diagonal stripes. Pedal to the metal then, and keep it there until the speedo was showing around 250kmh, one 997 ahead, four 991s behind. Which in my native British English is a little over 150 miles every sixty minutes. 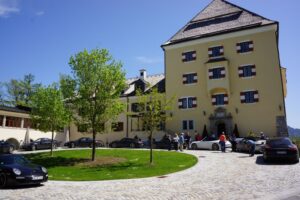 Nicola and I had signed up a few months earlier for this trip with Fast Lane Travel and were not quite sure what to expect. The advertising looked enticing and the itinerary interesting. Twelve days, 3,000km and several alpine passes, a brand new 991 Carrera S with PDK, good hotels, a tour of the 911 and Cayman production plant and the Porsche museum at Zuffenhausen. What was there not to like? As it transpired, absolutely nothing.

On our first day of driving we boarded our brand new (21km) 991 Carrera S PDKs with chronosport package at 9:30am sharp at the hotel in Stuttgart and headed out for Salzburg. We traveled in two groups of six cars with the bilingual leaders giving instructions over walkie talkies. We had opted for the fast group—those happy to go 150mph plus. 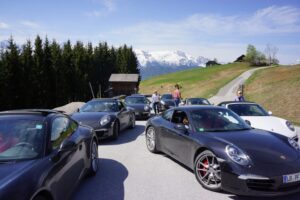 It was a holiday weekend and the traffic was fairly heavy but the lane discipline by the German drivers is so good (absolutely no passing on the right, fast lane for overtaking only) that almost as soon as we hit the derestricted area we were traveling in convoy at 220kph with sustained bursts to 250- plus. At those speeds the driver does not notice the scenery too much, so we pulled off and negotiated some back roads. Those miles were as good as you could hope for, sunshine, switchbacks and elevation changes with the flat sixes sounding like the music of the gods. It really does not get much better, particularly when the car belongs to Mr. Avis!

Lunch in the mountains which were still heavy with snow and then a circuitous route through the Bavarian countryside to Salzburg. Dinner at Europe’s oldest restaurant, with an excellent performance of extracts from popular opera. Just one of many evenings enjoying good company, food and wine.

There is more, much more, to motoring nirvana than the German Autobahn and fine B roads. There is, for instance, the Grossglockner high alpine pass. It had opened for the season just two days earlier so we negotiated towering snow walls as we raced up to the summit along 48km of road laced with 36 hairpin bends. Having Eagle One call all oncoming traffic over the radio made for a very rapid and safe ascent in bright sunshine, with the temperature dropping from 22.5C at the bottom to just 6C at the top. Not unlike a lap at Mosport in May!

I could easily have spent all day driving up and down that fabulous road. But we scooted on over to Gmund, where by special arrangement we were shown inside the original factory office of Porsche GmbH. It is a wooden shed of probably no more than 800sqft and has been preserved by Helmut Pfeifhofer who also runs a small museum nearby. Helmut has, among other things, the wood drafting table used to draw up the original Porsche 356. Not many folks get to see it and photography is not allowed. To the Porschephile this is like finding the holy grail. We can all feel very fortunate that Helmut has taken the time, trouble and not a little of his own money to preserve the true birthplace of the Porsche marque. Our return to Salzburg was a very pedestrian affair as Austrian autobahns have speed limits and we were hobbled to no more than 150kph. Such is life. 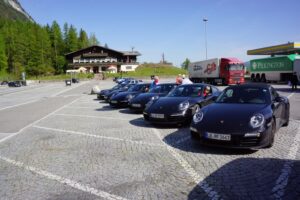 There was a competitive event—the photo rally. Much like a treasure hunt although collusion, cheating and bribing of the self-appointed officials was actively encouraged. Once again, the weather was spectacular and again we headed up beyond the snow line for some breathtaking roads and scenery. We pulled off for a well-earned stop to sit under umbrellas and feast on Apfel Strudel and hot chocolate. This event is so well organized that everywhere we stop there is reserved parking and the best tables are set aside for us. A sort of Venice Simplon Express experience for petrol heads.

Our tour leaders really reached for the stars with our lunch venue, Schloss Fuschl. This grand property sits at the end of Lake Fuschl and has to be quite the loveliest dining venue we have seen, anywhere. In the weather we had it was beyond any superlative I can find. Imagine, you arrive as a convoy of 11 black 911s and one Panamera and the uniformed staff hold back the mere mortals as we park in our prearranged location—right in front of the main entrance on the magnificent circular drive. Sometimes it seems our convoy is the subject of as many photographs as the surrounding mountains.

You know the adage about the journey being more important than the destination? It was written for our trip from Salzburg to Lindau. We first hit the Autobahn and reached between 265 and 270kph, I cannot tell you precisely because this was the last place I was going to look was down at the speedo. Then, a long cross-country drive through twisty roads at a very spirited pace. Our leader, Thomas, [aka Eagle One] has lived nearly all his life in this region and it is only through his intimate knowledge of these roads that one can travel so quickly and yet remain safe. Today we also conquered the car’s iPod interface. Blasting through the mountains listening to Wagner, Gluck and Mozart seemed rather fitting.

The final day of driving featured a very fast drive to the medieval walled town of Rothenburg. First there was the obligatory refuelling exercise—we all line up at one pump and take turns to pump gas and clean windshields. There is no pay at the pump so the pump is kept running between cars, up to the 250-Euro maximum. Then Thomas runs in to pay and we start on the next 250 Euros. Then we were off at high speed. It is so nice to pass police patrol cars at maybe a 70- to 90- mph speed differential and get nothing more than a knowing smile! Rothenburg is a wonderful medieval walled town which is almost entirely preserved and extremely photogenic. 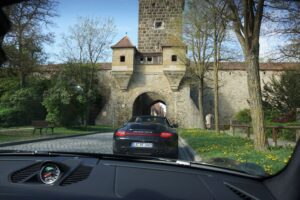 After lunch we departed on the very sad final leg. As we reached the first unrestricted speed sign Thomas came on the radio, “OK Eagles let’s fly, one last time.” We duly mashed our the right pedals, not letting up until I saw 170mph flick onto the digital speedo. Every vehicle in our fast group returned to the hotel in perfect condition and with zero defects. A testament to Fast Lane and Porsche in equal parts. We had a blast and have since been on a Fast Lane trip to Tuscany and are booked on a trip to Leipzig, Prague, Vienna, Salzburg and Stuttgart this fall. See you there?… 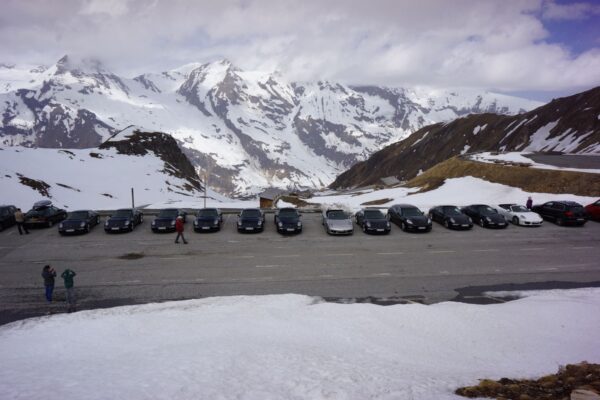