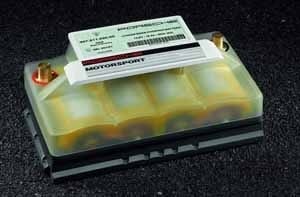 Stuttgart. Dr. Ing. h.c. F. Porsche AG, Stuttgart, is the first car maker in the world to offer a starter battery in lithium-ion technology. Weighing less than 6 kg or 13 lb, the new battery is more than 10 kg or 22 lb lighter than a conventional 60 Ah lead battery.

The new lithium-ion battery will be available as of January 2010 for the 911 GT3, 911 GT 3 RS, and Boxster Spyder as an option delivered with the car, selling at a price in the German market of Euro 1,904 including 19 per cent value-added tax.

The battery is delivered as a separate unit together with the car and may subsequently be fitted as an alternative to the regular, conventional starter battery.

The cars are delivered with both batteries, therefore they are ready for use throughout the whole year. Since, while the lightweight battery offers a very high standard of everyday driving qualities, its starting capacity is limited at temperatures below 0o C or 32o F due to its specific features.

The primary reason for developing and introducing the new battery was its lower weight. In sports cars built consistently for superior driving dynamics such as the two versions of the 911 GT3 and the Boxster Spyder, less weight naturally means even greater agility and driving dynamics.

In its length and width the lithium-ion battery comes in the same dimensions as the regular battery, but is approximately 70 millimetres or 2.8” lower. The fastening points, electrical connections and voltage range are fully compatible with the respective models, allowing simple and quick replacement of the standard lead battery by the lightweight unit, for example when racing on the track.

With its nominal capacity of 18 Ah, the lithium-ion battery, through its specific features, offers a level of practical output and performance not only comparable to that of a 60 Ah lead battery, but rather even better in many cases.

On a conventional car battery only about 30 per cent of the total capacity is actually available for practical use due to the configuration of the system, while this restriction does not apply to the lithium-ion battery. On the contrary, through its characteristic structure – and, in particular, the independence of the chemical composition of the electrolytes from the charge status – a lithium-ion battery consistently offers almost 100 per cent of its capacity.

Delivery of power by the lithium-ion battery throughout its useful charge range is likewise significantly better, providing its full power, for example, when starting the engine almost independently of the current charge level.

After the engine has started, the new Porsche battery shows further benefits in the charge process, being able through its smaller internal resistance to take up more power than a conventional battery and thus re-charge more quickly.

Yet a further benefit is that a lithium-ion battery allows a significantly greater number of charging and discharging cycles, plus the two further advantages that the self-discharging effect is lower and the service life of the battery longer.

The lithium-ion battery being introduced by Porsche as the pioneer in this area is made up of wound film of carbon and iron phosphate with a ceramic film moisturised by the electrolyte serving as a separating layer in between. Compared with other types of lithium-ion batteries using a combination of manganese oxide, cobalt oxide or nickel, this lithium-iron-phosphate battery, as it is called, offers advantages when used as a starter battery. It is robust and consistently guarantees the usual voltage of 12 V in the car’s on-board network.

The lightweight battery is made up of four cells and integrated control electronics. This battery management system protects the battery from major discharge and guarantees a consistent charge level within the individual cells. Once battery voltage drops below a certain threshold, a warning signal reminds the driver to re-charge the battery either simply by driving the car through the power of the engine running or by means of a conventional battery charger.

The new lithium-ion battery will also be available for retrofitting from February 2010 on the three models mentioned from Porsche Tequipment. The sales price in Germany when retrofitted after delivery of the car is Euro 2,499 including 19 per cent value-added