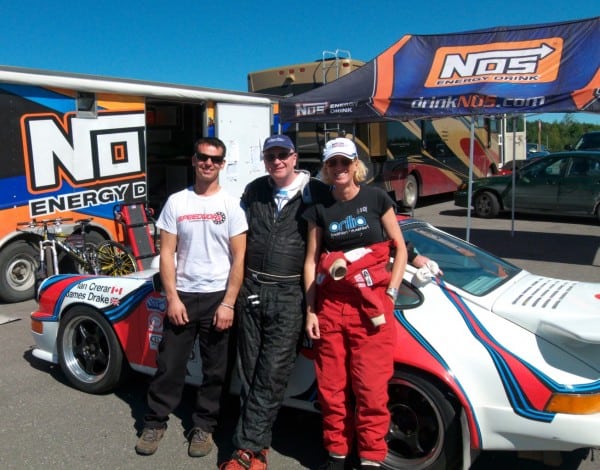 My foot’s flat to the floor, the sun is shining, and car after car after car whirls past me as I climb the back straight at Mosport in the little ’83 911. Grinning ear to ear, my joy is overwhelming. Not only am I driving my first race, I’m doing it in a gorgeous vintage 911—fully decked in Martini livery—on a perfect day, at one of the most fabled tracks in North America. I push the radio button and holler over the racecar’s din at Drew, the crew chief: “I’m living the dream, man! Living the dream!”

The Enduro grid. We are out of sight at the back.

I was there thanks to Ian Crerar, owner of the 911. He is a long-time rally racer and owns Clearwater Design boatworks (they make roto-moulded kayaks and other boats) in Picton, Ontario. We met through racing—he had started his summer campaigning the 911 in Vintage Automobile Racing Association of Canada (VARAC) events where I crew for my brother. I had been looking for a chance to race, so when the Enduro came up, Ian suggested it would be a good place to start. I jumped at the opportunity. Thanks to Ian’s spontaneous nature, the plan came together in the space of less than two weeks from concept to realization. Ian brought the car, the crew (Drew Cameron) and the third driver (Eric Vlasic). All I had to do was show up and pay my share of the entry fees and expendables.

The test day before race day was chaotic. Drew was kept busy chasing an oil leak that had the car smoking intermittently, but by the end of the day we had all driven the car enough to have a feel for it. Drew constructed custom seat inserts for me and Eric so we could be reasonably comfortable in Ian’s race seat. That’s one of the issues with endurance racing, where you have to share the car—it helps to have team-mates with similar physiognomy. Ian is much taller than either me or Eric, and I needed a fair bit of padding to reach the pedals. Even so, the driving position was less than optimal, with my left knee grazing the section of cage that runs under the steering wheel every time I released the clutch.

Race day brought perfect weather, and nerves. From the moment I woke in the morning the adrenaline was rising. I was jumpy, excited and a little scared. I have lots of seat time, but almost none in the car I was about to race and no wheel-to-wheel race experience. What if I screwed it up and wrecked the car? What if the traffic was too much for me?

We had a chance to practice early in the day, and the boys agreed I needed the laps most, so I suited up and headed for the grid when our session was called. But the grid marshals turned me away—we had forgotten the race sticker that proved we were registered. I waited, trying to stay calm, still strapped into the car, while Eric ransacked the trailer, hunting for the sticker. He finally found it, and I made it onto the track before our 15-minute practice ended.

Driving on the familiar track during practice was an awakening. There were spectators everywhere; the front straight was lined with people and the start-finish tower was manned. Coming around turn 10 for the first time like that was a rush. But lap two the Turn 6 marshals were peering intently at the underside of the 911. I’ve seen that stance before, and although I could see and feel nothing wrong with the car, I was not surprised to see the meatball flag being vigorously waved and pointed at me on the front straight. I drove around the track to the exit, trying to stay off the racing line, in case the car was really leaking. 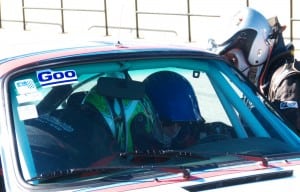 Ian and Drew help me get belted in.

With only a short time to go before the qualification round, Drew and Eric quickly tore into the engine, found the problem and set about fixing it. Ian made it in time for quali, and the car was perfect, so now all we had to do was get organized for the race.

The three-hour race has one mandatory 90-second stop. Each of the three drivers on our team had a one-hour stint at the wheel with refueling at each changeover. Being done in less than 90 seconds was not going to be an issue for us.

We loaded up the pit wagon with anything that might come in handy during the three hours. We had fuel, air, spare wheels, tools, fire extinguishers and more. But our set-up was minimalistic compared to some of the other teams with the fast-fueling rigs, viewing stands and multiple crew members.

Ian drove the first stint, and stayed out on the track just over an hour. The longer he was out, the greater the intensity for me. As Drew gave me the countdown, and I suited up in fire suit, balaclava, helmet, Hans device, boots, and gloves, I felt a cold calm rising from my feet. I was not afraid any more, just really focused. I knew the mission: Just drive the car as fast as you safely can for an hour. Simple! 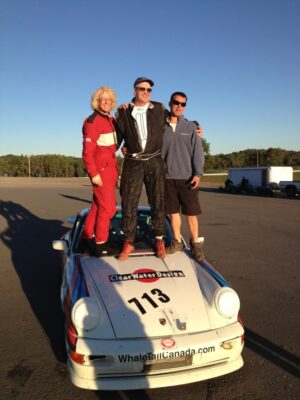 When you race with rally guys you celebrate like them.
Photo by Peter Brownhill

The car pulled into the pits and Drew rushed out to help Ian’s exit. Once he was over the wall and out of the hot pit, Drew and Eric refueled the 911. And then there was no turning back. I was over the wall and into the car. Ian and Drew leaned in through the windows and helped do up my belts, attached the window net and slapped the roof, telling me I was good to go. For what felt like an hour I hesitated, trying to breathe. Everyone stared at me, but no one spoke. Then the spell broke, I put the car into gear and stalled! A great start—I was laughing at myself as I pulled into pit lane.

Joining the race, I discovered a full-course yellow, meaning there was no passing. That was a comfortable way to get a few laps in before the full-on mayhem started. But rounding turn 8, I could feel the engines around me revving up. As we came through the front straight the track went green again and the 911 was like a rock in a river—the current of faster cars parted to go around me. Driving a slower car in a race requires nerves, a degree of courtesy, and eyes in the back of your head.

My hour went by in a blink. One minute I’m parading around under the yellow, the next I’m wailing up the back straight in my euphoric state, telling Drew I’m living the dream. And then they called me in. It was Eric’s turn to drive.

And that was it—I did it. I drove my first race in a 911, didn’t crash, and we even managed a class trophy for our efforts. At the end of the day the three of us stood on the hood of the car, rally style, for our triumphant victory pose.

I learned a ton doing this race, and I owe Ian, and Drew and Eric a huge thank you for all they did to make it happen. It’s two months later and I think I’m still high. They are an awesome team, and I’d love to make it an annual event. Next time we’ll be faster!