This weekend I was back driving at Mosport for the first time this season. Ernie Jakubowski at Mantis Racing had received Martini from the Florida transport truck and brought her to the track, fettled and ready for action on fresh R1 rubber. I had been looking forward to this for some time, first time out on my northern home track with the new engine, brakes and suspension.

What I realized once on the track was that either somebody had knobbled every car in my run group or my misspent hours of track play in Florida had improved my driving somewhat. Miss M and I were leaving some of our best track buddies behind now.

What to do? Get a checkout ride to move to black group of course. The chief instructor directed that I should be tested on Sunday morning by an instructor and racer named Tim Sanderson who competes in GT3 Cup successfully. Bruce Trigg emailed me to ask if I had gone out with Tim and how things had progressed.

This was my reply: Oh yes did I ever go out with Tim, we had an absolute blast with him egging me on ever quicker. His comments upon returning to the paddock were very positive and consisted of tips on how to make yourself noticed to the slower cars in front, turning in later and…switching off PSM. He promptly had me moved up to black and Ian our chief instructor for this event was extremely nice about it. I ran around the paddock thanking all my old instructors for their help in eventually getting me to this point.

First PM black run I took Ernie out with me so he could see how I drive and what the car was doing. He didn’t say much at all. When we came in he had a student waiting so I said I would catch him later for his thoughts. When we met up I asked him how long was the list of my undoubted inadequacies as pilot.

He threw his head back on his chair and smiled. After a very long minute of silence I prompted “Well should I just hang up my keys now or what?”. After a further rumination Ernie said simply, “It would be so much easier if I could show you by driving the car”. That was fine by me and we went straight out with me in the right seat expecting a few nice rapid laps, something I could maybe aspire to emulate with practice. The warm up lap was taken a little quicker than I would go but nothing out of the ordinary and then….OHHHH SHIT!!! I knew within a half lap why Ernie has won six Canadian Championships. 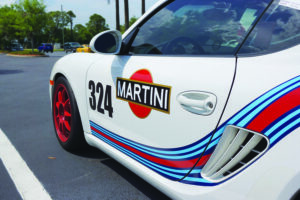 The track attacked us from all angles with the PSM firmly OFF. Martini was raising her skirts and showing me things I had never seen before. Impossible things. Second hot lap and we entered T4 at breakneck pace and, gulp, NO BRAKING AT ALL. I swear the demon at the wheel once had an abusive relationship with a brake pedal and now just refuses to acknowledge that they are there. We were in such a lurid drift half way down to T5 that the PSM cut in. Ernie had switched it off but apparently it lurks in the background even when ostensibly disengaged, waiting for you to do something REALLY STUPID. Until that point it had been wild but controlled but clearly some German engineer had deemed that what Ernie was doing should never happen to one of their products. Well I can tell you that the PSM emergency ‘chute deployed and ‘exciting’ became far too mild a term to describe our progress toward T5 in a mind numbing zig zag dance. I took what solace I could in the fact that Ernie was still smiling and we just shot around 5. Undoubtedly he would have loved to cut the lifeline to the PSM altogether and would have made a far neater and cleaner job of it himself unaided. He and Martini ate everything out on the track—and I do mean everything as they all flashed by in a kaleidoscope of colours that moved rapidly behind us.

As we assailed T2 with maybe 20G being magically generated by tyres that had never gone much beyond 1.2G before, I made the obvious comment to the guy at the wheel of my little red white and blue rocketship. “So, Ernie” I yelled above the din “what you are saying is that I’m a really slow driver. Probably I should spend my Sundays shuttling little old ladies to church in the minivan?”. When we came back in, he kindly said that well, really, I should just work on my lines, turn in later…and switch the PSM off. Deja vu all over again.

The car is apparently sound but needs to go on a diet. Why is it that losing weight is so darned expensive? She is 400lbs heavier than Ernie’s race car so that is a lot of carbon and kevlar. I know what it cost to build my last road bike which came in at just over 13lbs with pedals, scaling that up to Martini is not going to be cheap. Maybe I should just buy a Radical and stick a Porsche badge on it.

Ernie says he wants to fit a PSM ‘kill switch’. I know just the switch to use. The new Morgan three wheeler uses one for a starter button, it is the bomb release switch from the RAF Tornado, seems about right.

I think that about says it. Oh and for anyone interested Ernie has gotten himself a nice little deal with a major new university wind tunnel with government funding, an aerodynamics professor and countless post grad engineers that just love to see something from the track once in a while. Can’t wait to see how much downforce that big white wing is exacting.