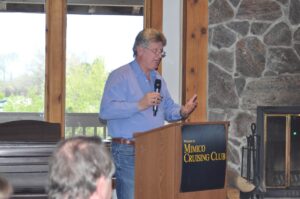 Lee Abrahamson has a self-deprecating style and a long history on the edges of auto racing in Ontario and around the world. For example, he won his race class—once. He built a race track on the former Dunnville airport site, but had to contend with a ten-metre-high heap of turkey poop from the previous turkey-farming operation. The local municipalty didn’t much like the idea of a race track and so, after several years and $500,000, he was forced to shut down. Abrahamson went on with his personal exploits for about an hour.

He was co-founder of The Canadian Motorsports Hall of Fame with Gary Magwood. He was able to recount meetings with or about up-and-coming drivers with talent, but no money. He told us how they finance talented drivers in Brazil—with a limited partnership unit priced at $50,000 each for 50 partners. It’s either that or dad has the millions it takes to make it professionally.

He discussed an idea for a track in the Niagara area. Abrahamson had recently proposed a 3.5-mile (5.6-kilometre) racetrack, drag-racing strip, karting track and associated uses such as a conference centre, museum, food and service facilities on a 230-acre piece of property in the northeast corner of the QEW-Sodom Road interchange; that is now dead. There were also two other prospective race tracks near Fort Erie. No hope. 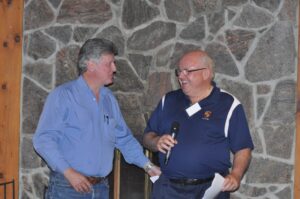 What was quite surprising was the retinue of members who gathered at the end of the evening for an ongoing Q&A with Abrahamson. Jay Lloyds said, “I have known Lee for twenty years.” J. Crawford Reid came from Brantford to hear Lee tell all. Gerd Schwarzkopf was keenly interested in the speaker’s comments.

The evening went a little later than usual because it took a while for the group around Abrahamson to dissipate. 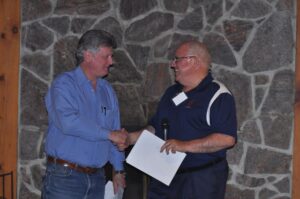 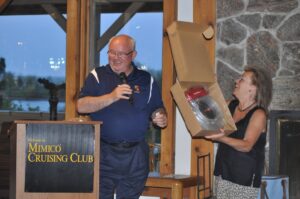