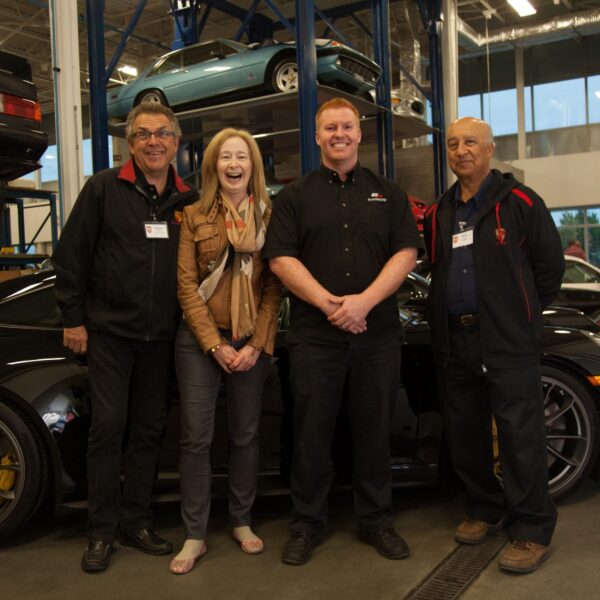 If you are a car nut; and in varying degrees isn’t every Porsche owner? Then, Engineered Automotive was the place to be for our Tuesday night May Social. EA’s facility is large, pristine and every station is organized with utmost precision. EA’s entire layout is divided into an 8000 sq.ft bodyshop, 1500 sq.ft. dyno room, a showroom packed with “toys” of every make, an upholstery room and of course a large repair facility. All of the cars are customer owned and are either being stored or being repaired/modified.

Amongst the delectable, were a large assortment of 911’s including several GT3’s and a lovely red 959 in for rear axle repairs. Tucked into a far corner was a totally stripped 356 cabriolet that looked like it had just come out of the paint shop at the factory and was now ready to reassemble into a “new” 356. Quite a few Ferrari 360’s along with an early Ferrari 400 and a fabulous Ferrari 250 Pininfarina Coupe that was a barn find in Italy two years ago and is now restored. Two early 1950’s toys were a Jaguar XK120 roadster that was immaculate and a Packard Clipper convertible in cream yellow. Altogether a lovely group of cars for a group of car nuts!

A huge thank you to Billy and Maureen Smilvosky, owners of Engineered Automotive and to Dan Pye, General Manager, for their generous hospitality in hosting our Social at their facility. This was a wonderful opportunity to share calendars, events and swamp stories with fellow UCR Members. With almost 90 members and their guests coming out for the Social, we had record attendance yet again!

We had several New Members attend their first UCR Social. Welcome to Gabriella Eustace, Oliver Collins, Sean McKoy and Nick Nicolaou. We look forward to seeing you at another Club event soon!