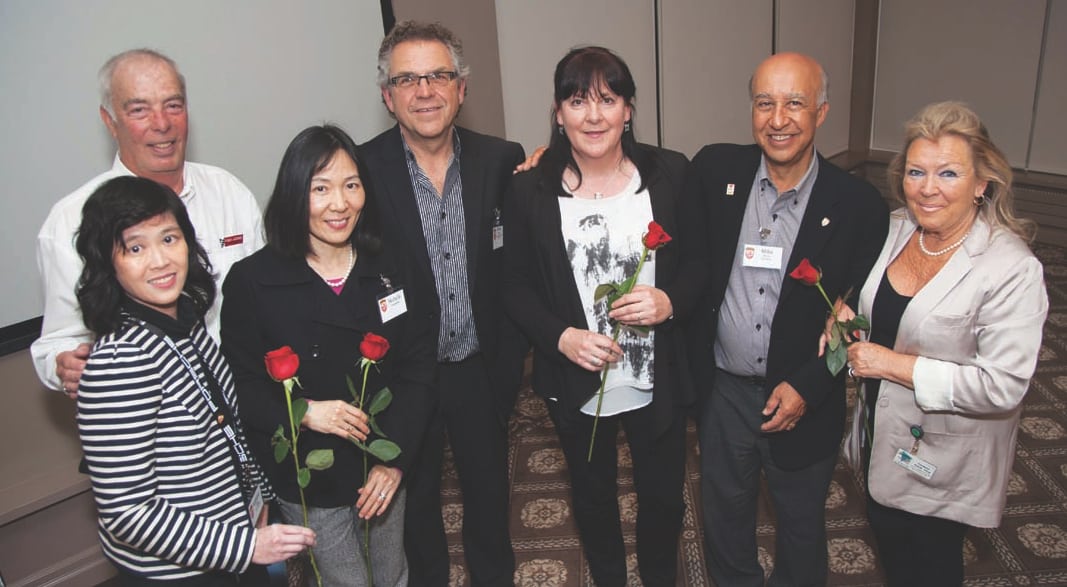 In observance of Mother’s Day, Hostess Dagmar Ruehl-Pegg made sure all the women present received a single, long-stem rose!

It was a pleasure seeing so many UCR couples attending the Social at the Islington Golf Club on May 10th. As Mother’s Day was only two days earlier, Dagmar Ruehl- Pegg kicked off the event by presenting a single long-stem red rose to all the women present. Great idea Dagmar! Sixty UCR members and guests enjoyed an excellent hip of beef and garden salad dinner at Islington. We’ve added roasted fingerling potatoes to the menu and these were a hit with our attendees as well.

Mike Bryan welcomed the audience and spoke briefly about the upcoming PCA Parade in Jay Peak, Vermont. Hazel de Burgh then spoke about the need for volunteers at the May Street Survival School and UCR’s extremely popular Fun Run program. Anyone wishing to host a Fun Run, Ramble or Tour in the late summer or autumn should contact Hazel for guidance. They are easy to organize and a great way to share your favourite roads with fellow UCR members.

Pete is PCA volunteerism personified. Region President, Zone Rep, National DE Chair, and National DE Instructor Certification Program Chair. These are just some of the roles that Pete has filled for PCA. This all started back in 1973 when Pete bought his first Porsche, a four-year old 1969 912. Pete immediately joined the PCA and was elected President of the Schattenbaum Region of New Jersey in 1981. Pete was initially worried about tracking his 912, but saw the professionalism and safety consciousness of the PCA Driver Education program and has been actively involved in DE for 36 years. Since then, Pete, along with three others, created a set of National DE Rules and served as National DE Chair for 13 years.

Pete has managed the National DE Instructor Certifica­tion program for the PCA since its inception in 2004. Over 5000 PCA DE Instructors have been trained under this program. Among other roles, Pete was also Zone 1 rep for seven years and was recently “re-recruited” to be Zone 1 Rep again.

Pete first attended the annual PCA Parade in Portland, Maine in 1986 and has attended most, if not all PCA pa­rades since then. Pete urged all UCR members to consider attending a Parade at some point as it is a special celebra­tion of people and their love for Porsches. At the Traverse City PCA Parade, Pete was given the PCA National Volun­teer Award by PCA President Manny Alban. Pete currently owns six Porsches, including his original 912 and two 911 C2 models. Where does he find the time to drive them?

Through his active involvement in so many PCA Pro­grams, Pete talked about all the many friends and wonder­ful memories he’s made along the way.

Hostess Dagmar Ruehl-Pegg then gave away about a half-dozen door prizes. Special thanks to her and volun­teers Kathleen Wong, Mario Marrello, Kim Viney and Michelle Gananathan, who all played a role in making the evening a success.