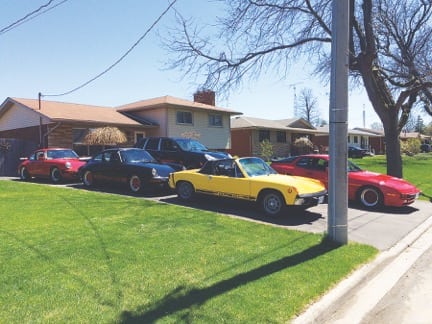 I’ve been a member of the club on and off since I was 20. I ran the Concours event a couple years in a row when it was at Appleby College back in the 90’s. I just recently returned to the club and have been enjoying reading Provinz. It was still in black and white last time I was current with my membership!

I like the articles in Provinz, especially the ones talking about member’s cars because it is really tough to stop with one P-Car! That being said – my story isn’t too exciting but I fell in love with the very first Porsche I ever saw when I was 7-years old and have dreamt Porsches ever since. Got lucky and purchased my first 911T when I was 18, and had them ever since. Today, I’ve got an 85 and 88 Carrera, a 944, Cayenne and a 1 owner 914 that I bugged one of my high school teachers for and 29 years later, I got it. Persistence paid off!

I drive them all – they all have their own and different personalities. So nothing to exciting, but together – my collection makes a great photo! An encouragement for everyone considering another P-Car or that first Porsche! I enjoy all of them. Drive safe! Darin.

Life is Too Short