Members’ Rides – All or Nothing 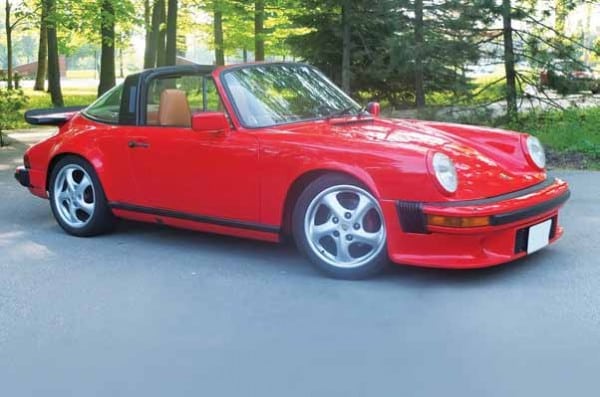 Five minutes from tune-up to re-build

All photos by Adrian McInerney

A few years back I found myself as a passenger at CTMP with a couple of good pals, Dan and Darryl, both eager track-day participants. It was a spectacular day and by the end of it Dan commented, “Mac, I predict you will have a toy car by this time next year.”

Just the push I needed. I have always been a fan, and share the same birthday as the 911, so what the heck— within six weeks I was the proud owner of a 1986 3.2 Targa in Guards Red. A California car no less. Oh Happy Day!

Of course this was just the beginning. What you need to understand is I am a man of extremes. It’s a weakness, but everything I do has to be 100 percent full-on or not at all. I’m a Burlington, Ontario resident with a double-car garage but no lift or any fancy tools to speak of. As a mortgage broker, I spend the vast majority of my time staring at numbers. I am certainly not a mechanic. Or am I?

My pal Dan has an industrial unit with a lift and every tool known to mankind. More importantly he has the generosity of a prince, an attitude that promotes real confidence and the freedom to use his space to “tinker” with my now prized possession. So, down the slippery slope I went.

It started with the Carrera tail and a new front valance, then exhaust, suspension, then roof seals and seats, carpet and interior trim and then: UCR Autocross! Enough tinkering, let’s play. Way too much fun. Thanks Mario!

The following season, I discovered Cayuga. A nice, technical track 40 minutes from my home where I could stretch “Red’s” legs to see what she could do. Only one problem, Red’s legs were…well…a little short and that just would not do. It was time to look to the powertrain and consider a tune-up. 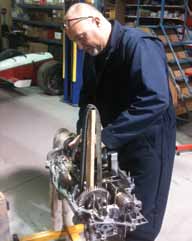 A regular tune-up, valve adjustment, distributor service just seemed underwhelming. After about five minutes of careful consideration I decided the old 3.2 had racked up enough mileage that it deserved a re-build. So, I went on a quest, full of excitement and vigor ready to hire a pro to perform the job.

Then came the quotes. Uh oh. Now, I’m not suggesting that a good Porsche mechanic isn’t worth every penny, nothing could be further from the truth, however I just didn’t have that many pennies! What to do, what to do? Hmm.. I have eight fingers and two thumbs and I hope at least half a brain so I decided, what the heck, I’ll do it myself!

That day the odyssey began. I immediately started reading everything about Porsche I could get my hands on. History, technical manuals, forums, everything. I purchased the Wayne Dempsey re-build guide and read it back to front, a few times. Once I felt ready, I took a big breath and open heart surgery began in earnest.

At Dan’s shop, we methodically went step-by-step disconnecting lines, draining oil, removing exhaust components, unplugging the wiring harness and various linkages for what seemed an eternity. In fact it only took a couple of hours, but the stress of the event made it seem like much more. We split the block from the transmission and then spent far too much time trying to pry the motor out of the engine compartment. Lesson learned, always drop the motor and transmission together. It is a far less frustrating experience. Finally we had the motor out and sitting on a milk crate. I stood back and reality hit, I’m all in now and there is no turning back!

This is where I should mention that one should never approach one of these beautiful motors as you would a domestic V8. The tolerances are extremely critical and there are quite a few specialty tools required to perform a rebuild. I started collecting all of the tools and parts required to complete the job start to finish. Thank you Pelican Parts. Their complete rebuild kit had everything I required with the exception of a couple of fluids they could not ship over the border and the elusive cam holding tool which is a must-have. I want to give a big shout out to the generosity of John Landry who answered my cry for help on a forum one day by offering to lend me the tool! I love the Porsche community; that tool was indispensable and without John I would have been seriously stuck. The following weekend Dan and I mounted the motor on the correct engine stand and went to work tearing it down. 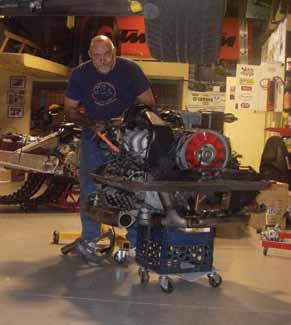 As it was in great shape and pressures were right on the money, I elected to remove the fuel injection as a single unit rather than breaking it down. I sent the heads over to the famous Robert Gross in Bolton, Ontario for a complete re-build. They came back within a couple of weeks and were nothing less than works of art. By the end of that first weekend we had the entire motor apart, bagged, tagged, inventoried and ready for cleaning. The cleaning process was long and arduous, but worth every minute.

Interestingly, I found an article online regarding an often overlooked issue with the piston squirters in the 3.2 motor. Over time, these become blocked, resulting in less than desirable cooling directly on the pistons.Blocked squirters accelerate engine wear as well as engine temps, therefore reducing power and life span. With the case split, cleaning these journals is actually quite easy with a basic rubber hose, brake clean and a pressurized air line.

Within a couple of weeks I had all of the parts, tools, gleaming case halves, heads, cams, intermediate shaft, oil pump and crank shaft ready for re-assembly. It is so important to note that measuring and checking tolerances multiple times is crucial! These motors are like a fine timepiece. Everything fits to an exacting standard and post assembly “feel” is so important. For instance, if you re-install the crank or cams or the intermediate shaft and oil pump and it does not feel smooth on the ends of your finger tips when you give them a turn, the odds are they are not “right”. Don’t take a shortcut. Disassemble, re-check the tolerances and try again. If it’s still not right, get help. Nothing will wreck a great rebuild faster than an ill-fitting set of bearings. 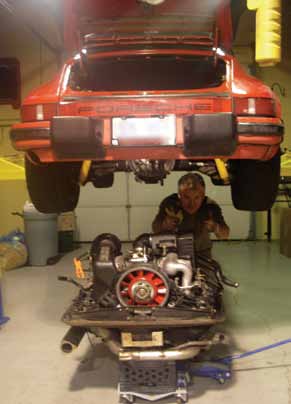 In my case, all was good so I moved to the next step. Once the “Long Block” was back together it was time to set the cam timing. If you are new to this stuff, do not attempt this step on your own. Again, tolerances are way too critical, and I have to thank Robert Gross for helping me. I also decided that as it was out of the car, the transmission deserved attention. So, after a good cleaning, it too was sent off to Robert for a rebuild.

By early April, the motor and drivetrain were back together and with the help of Dan, Robert, and my pals Don and Radik, it was installed and ready for the first turn of the key. With Robert’s head buried in the engine bay ready to feather the throttle, I turned the key and she came to life immediately! She belched and puked and blew smoke and then quit. My heart sank. Another turn of the key would prove to be just what was needed. She fired right back up and after about 30 seconds of coaching settled into a wonderful purr right at the prescribed 880-900 RPM range. Oh glorious day!

After a single teething issue—I had neglected to gap the speed sensor which dictates the max RPM for the rev limiter—I am happy to report she is run-in, re-tuned and running better than ever. The reality is that I now have a beautiful ’86 911 with a brand new drivetrain, suspension, all of the trimmings and the gusto to prove it. I love driving this car!

The engine project took around 60 hours to complete. I learned an immense amount about the process, the Porschesphere and Porsche people. I look forward eagerly to my next one. All it takes is patience, the will to work through the process and a love of the brand.

If I can do it, anyone can!

Previous articleOBJECTS OF DESIRE – Hello, Kitty!
Next articleMarch Social – The Art of Racing in Targa Newfoundland 2014