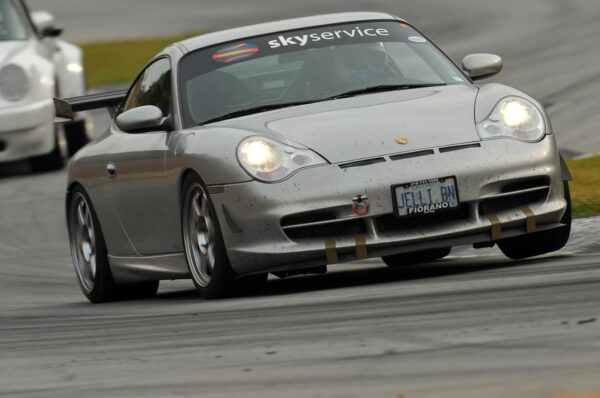 This was going up the esses at Road Atlanta, on one of the last days of the 2012 season. The car is filthy and the splitter is held on with duct tape.

Following the September UCR DE at Mosport, I did not even unload the car from the trailer. I left Toronto first thing the following Tuesday morning heading for two days at VIR and another two at Road Atlanta. Needless to say, on my return, the car was nicely covered with a coat of bugs and rubber.

The car is a 2005 996 GT3 that has been substantially upgraded with Porsche cup car parts (suspension, gear box, etc.). I’ve owned the car for two years, and have used it on the track quite a bit during that time.

[Editor’s note: Francois uses his car on the track “quite a bit” still, and in fact emailed me just before press time looking for some mysterious “boxes of stuff” (parts) that might have included some missing gears he needed to repair a broken transmission before another road trip. Last report was the boxes were a disappointment, but the correct parts were on order and should have been in place on time.]

Now, about the “JELLI BN” plate. My previous car was a Speed Yellow 997 Carrera S, and my then three-year-old grand-daughter used to call it “grand-pa’s jelly bean car”, so I got the license plate to match.

It’s Not Easy Being Green