How four men came to buy their Porsche Boxsters 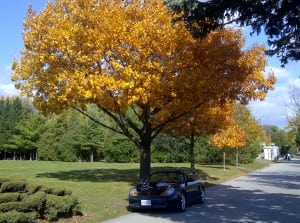 My wife and I sat at our usual table in our favourite Greek Restaurant on date night, sharing and talking as we usually do. She mentioned it would be nice to have a convertible car for summer driving. My mind raced with the challenge of finding her that special little car that had to be manual and sporty, plus convertible. Her request was a VW Beetle, but I was thinking more of a Mazda Miata since budget was playing a big part in our decision.

We would have never given a Porsche even the remotest consideration as we thought that the price and stature would be unattainable, until one morning as I was having breakfast with a dear friend who just finished his cancer treatments and was in remission, told me he had just bought a used Boxster at a very affordable price. “I always wanted one and now is the time,” he said. 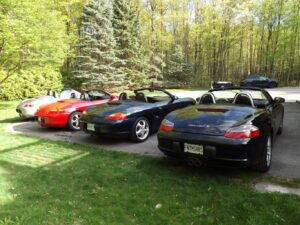 So I started with my salesman speech of how great a Porsche Boxster would be. Teresa kept saying no and how could she drive it to her mother’s house and to church and what would her friends think that she drives a Porsche (she is quite humble)? Until one conversation when she said “I saw a blue one today that looked nice.” Those are the words a husband is looking for. The game was on to find a blue Boxster with low kilometres.

Living outside of Toronto opens a huge market for used Boxsters, but none was to be found with our criteria (low km, great shape, older owner, blue). But, lo and behold, there was a beauty in Halifax from a recent divorced couple (he got custody of the car); a 1998 with 64,000km. Blue exterior with a tan interior and in awesome condition.

I flew to Halifax with cheque in hand and took the upgraded rental car—a Ford Mustang convertible. Blasted my way from Halifax airport at 130, loving it until those red flashing lights got the better of me.

I was greeted by the original owner at his home and spent the next two hours touring his home (he was an architect and his home was designed to look like a great ship, it was really cool). Finally, a chance to test drive the baby on the hilly Halifax roads. She handled like a dream. During the test drive we were stopped at a set of lights when a cop car pulled beside us. I glanced over thinking this could spell trouble when the officer blurted out “Wanna race?” Ha, ha. Only in Halifax. After a lovely dinner paid for by my host, I was ready to head back to the hotel (some two hours away). The Boxster’s original owner would have nothing to do with it. I was a complete stranger and his Eastern hospitality coaxed me into spending the night at his place. 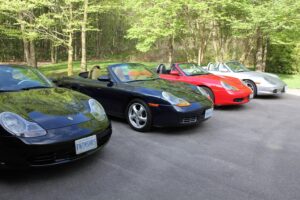 I fell in love with the Boxster, and paid for it, leaving it there until I figured out how to get it back home. Transport truck was not cheap ($700-$1,100) nor the train ($1,100 and up), so one of my employees suggested “ROAD TRIP”. Another set of words that get the male heart pumping. Teresa and I flew back to Halifax some months later and hired a cab (no speeding tickets this time) to get us to the vehicle. Driving back to Toronto was a pleasure as we took the US route through Lake Placid and up through Montreal. Winding down the roads through Halifax and New Brunswick was not without incidents. We were cruising along (at slightly over the posted speed limit of course) when a mother duck and her entourage of babies slowly walked across the highway. The handling of the Boxster allowed me to miss them all, but I am unsure of their fate with the semi behind us. As we were cruising along later that day a motorcycle whizzed by us at who-knows-what speed, followed several minutes later by a police car. I am pretty sure he got away.

Getting into the USA was no issue, but on our return into Canada we received the rubber-glove treatment at the border. Everything was removed from the car including our luggage and even our dirty underwear (both the officers were female). Of course they found nothing. Safely back in Canada and just past Montreal we decided to take the roof down and prove the theory that the Boxster is so aerodynamic that passengers will not get wet during a rainstorm. It works until you stop, of course.

Back at home with the car, a happy wife and personalized plates (98BOXSTR), we have put 26,000km on it, brakes, tires, clutch and 1,000 coats of wax. We have just purchased special rate insurance for classic cars at $290 per year, and look forward to driving it this summer with the top down. Since my good friend Peter purchased his 2002 red Boxster, my brother-inlaw, Larry, (after driving ours) purchased a 2003 silver Boxster S and another friend, Jack, bought a 2004 black Boxster (stories below). We call this our CBC Club (Christian Boxsters of Canada), however we have yet to cruise together. We are all members of PCA-UCR thanks to the original Boxster owner. We look forward to many more memories with our little blue 1998 Boxster. Now my wife says that I bought the car for myself but we all know it was all for her. I just get to wash and wax it once in a while, and if I’m lucky, she lets me fill it up too. 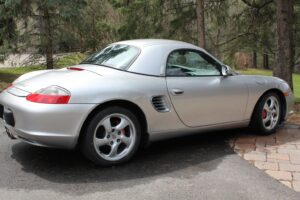 I have a 2003 Boxster S. The reason I became interested in a Boxster is all Eric’s fault. We had a lovely lunch with our wives in Niagara-On-The-Lake. It was a beautiful spring day and after lunch we were going to a cottage Eric had rented close to Niagara Falls. He gave me the key to the Boxster and invited me and Rosemary to drive it to the cottage. Of course, we put the roof down. The sun was shining. We drove past vineyards, the Niagara River and along a twisty paved road up the Niagara Escarpment. I think I kept the Boxster in second gear most of the ride because I was enthralled with the engine sound. I turned to Rosemary and said, “I need one of these.”

I managed to talk myself out of it for a few months, but the desire never left me. I kept looking at Autotrader, and researching the various years and features online. I wanted a 2003 because it was the first year with a glass rear window. In November I found the perfect car at a dealer. I traded in my AWD Infiniti, and convinced the salesman that he was much better off with an AWD car than a Porsche with a ragtop on his lot in November. I think I got a really good deal on the car. I then found someone selling a hardtop in the right colour, and someone else selling rims with winter tires. I drove the Boxster through that winter, and even this past winter with all the snow we had. It handles very well in the snow—better than many front-wheel-drive cars. 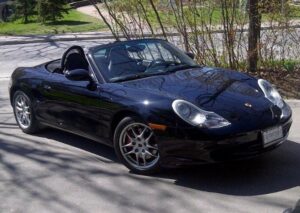 I have a 2004 Boxster S, USA version, triple black, low mileage. Found it on Autotrader after searching for about a year. The previous owner had it parked diagonally in his garage and it was in showroom condition.

By the time I saw it, I had test-driven several others and knew without a shadow of a doubt that this was a beauty. I decided on the spot to buy it. That was in March 2012. My license plate is FNTMSHRS. Can you guess what it means? 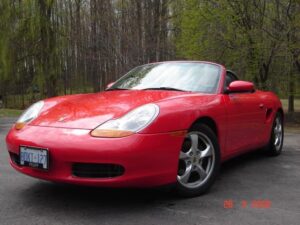 Mine is a 2002, bought in April 2008. My wife, Janet, encouraged me to get it, as a “why wait ‘til someday” idea. We had both been through a great deal and thought it better to enjoy life now than wait for “someday” to arrive.

The part that was really interesting to us was the fellow we bought it from is a Christian. He decided to sell the Boxster to invest more into a ministry in the Philippines. After we had discussed the car and price a few times I had told him we were just too far apart and I believed I was still looking for another car. He contacted us a little later and said he had been praying about the sale of the car and was led to sell the car to us as we had been through a great deal and this would/ could be part of the healing. Those were details we had not yet shared with him. So he had a new number in mind which was slightly more than we wanted to spend but way less than where he started. If we could meet that number it would take care of all of his needs and he would be happy to sell the car to us. So we did.