The Little Car that Could

A race car is born By Randy Smith, UCR member

Click on any image for a full size view.

In the spring of 2006, a long-time friend and fellow racer Max Schoemer threw around this interesting idea of building and racing a Porsche 944 in this new class called SP1. We had met through UCR Driver Ed events in the early 1990s and then graduated into racing shortly thereafter.

We both raced in the F1200 Canadian Championship (the Canadian version of Formula Vee). The class, recognized throughout the world, is now pushing 50 years young. To fully understand why the SP1 class held so much appeal to us, one must first appreciate the F1200 class. FV is an open-wheeled formula car running a “spec” 1.2 litre, 55 to 60HP, VW boxer beetle “stock” engine using drum brakes and adapted zero-roll suspension. It’s a class that stresses driver ability over pocket book as all parts and pieces have to be spec or as the factory offered it. With so little HP you are rewarded only with very precise and smooth inputs as momentum is the name of the game. Sound familiar? These are same principles the 944 Porsche SP1 class was based on, except you wouldn’t get soaked in a rain race. Now you’re starting to understand the motivation of my buddy Max!

As Max had not been racing for some time, he was really getting the itch again so we searched and searched for cars. Finally, in November 2006, a suitable car—a 1987 944—was purchased from another UCR member. The car was already in the early stages of a track car build. It was red, had a fibreglass turbo nose and fenders and a ton of parts and pieces. He decided to stick with the SP1 classification route and then we discussed all options for the completion.

We attacked the project. The first task was weight savings and the interior was the place to start. It was completely coated in heavy insulating materials (not a fun job!). Most of the work was completed was done by Max and another friend, Gary Lounsbury, with some participation from myself. Did I say stripping the interior is a rotten job?

We had considered several shops to complete the build, but we ended up going with Blaszak Motorsports. Markus does all his fabrications in-house and already had some successful equipment on track.

The new race car returned from Blaszak in the late summer of 2008. Markus had stripped the engine bay of everything except HP, fabricated and installed a custom Blaszak cage, bolted on some Blaszak A-arms and send it back to us completely painted white. There was still much to be done before being track-worthy, however: Seat and harnesses were to be fitted and installed, fire system, full gauge pack installed and wired, exhaust system, along with many other tasks. Max enlisted the help of old friend Auguste Lecourt (Auguste Automobile Service) to inspect and prepare the drive train.

With the help of Gary Lounsbury, the car was transported to Mosport for its inaugural track outing on Sept 3, 2008, a ‘Sixth Gear’ track day.

While Max was still targeting SP1 PCA club racing, he was also considering running with the Vintage Automobile Racing Association of Canada (VARAC). Max had always admired the old Rothmans Series and the look of those vintage cars. So with that in mind, new graphics were added. The car was taken to the track at the old Dunnville airport and on April 25, 2009, #78 was issued a Canadian Automobile Sport Clubs (CASC) logbook. Max and Gary continued to work on the car, debugging and tuning it at various track days throughout 2009.

In the spring of 2010, the direction took another turn. Max had invited me to join him and share some track time and help him dust off his driving skills, as I had still been running a partial schedule in the F1200 Series in 2009. The stars aligned and on one fateful Dexter Day at Mosport that late summer the die was cast. We drove out together, #78 in tow, sharing old memories of all the various tracks we had been to with the Vees. Max kept cautioning me that the old Dunlops were pretty well gone, but still pretty consistent and should be good for the day. Then he’d start on about how the track surface had changed, I reminded him that I had already raced there that year—just like old times!

I was eager to drive #78 as the last time I had driven any Porsche on the track was back in 1990 or 1991, in my original 944S2. The Chief back then was Howard Dexter, other Red Group dicing partners were Marc and Chris Plouffe, Stephen Goodbody, Bill Comat, Gord McNeil and a couple others. The 944 was a car that “wanted” to always go faster and actually could. The 911s I remember required more finesse but the 944s are forgiving, durable and an absolute blast to drive on the edge. That’s just about when I felt Max’s hand on my left shoulder shaking me to pull it in. Apparently I was having too much fun and he wasn’t.

The ride home that day was a mix of emotions for me. Elation that the 944 was as good as, and even better than I remembered. Sadness because, I kind of knew that my Vee had just been replaced. And excitement that I scared the crap out of Max. On old Dunlops with 130HP (plus or minus) and 2500LBS of 944 I had actually gone quicker than my 220+ HP S2 on R-compounds. 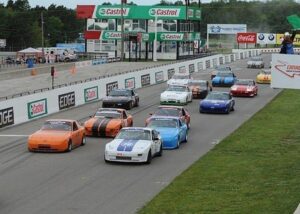 We both came away with all new plans. We needed to make further changes to the car, first for compliance purposes and secondly for performance. Considering the rule changes in 2010, we decided to run in class SP2. We added a Lexan hatch, STAHL header and had some of our phone dials widened to take advantage of the permitted specs.

The first event the team—Max, Gary and me—attended was the UCR Club Race at Mosport, July 30 and 31, 2010. This was to be a trial run and shake down for the car in race trim. In the first race—Yellow Sprint 1, on July 31, we took third place. In the second race—Yellow Sprint 2, also on July 31 we came first! Based on our results—and enthusiasm—we made the decision to campaign in the 944 Cup Series in 2011. Twelve races were on the schedule for the Canada Chapter of the series, plus two races at the National Finals which were to be held at New Jersey Motorsports Park.

Our first race at Watkins Glen did not go well. The pace was certainly there, but an altercation with another car resulted in an early trip home. In addition to stripping insulation the 13/13 rule (disqualification and probation) ranks right up there too. The next five races each resulted in podium finishes. We did not enter four of the races. At seasons’ end, we were fifth overall in the Canadian Championship standings. Not bad, considering we only ran two thirds of the races.

For the 2012 season, a full run at and winning the Canadian Chapter Championship were the goals. At the Clash at the Glen, we won pole out of a class of 38 cars. Ended up finishing third in Race One due to a last lap wayward 911; while I was executing evasive maneuvers two got past me. Race Two resulted in our first first place of the year! The year was starting fantastic. We raced at the UCR and IMSA Pro event at Mosport, and then Calabogie and the finals were at NJMP. We finished on the podium at every race we competed in for the year, took home lots of fast laps and a couple lap records.

Overall we ended up achieving our goal: The 2012 944 Cup Canadian Region Championship was ours. And we were second in the 944 Cup National Championship. The best part was, all we did to our #78 was put gas in it and tires under it. Little things like crank sensors, the occasional CV joint and several oil changes was all it needed. Markus built an amazing piece, Auguste makes it run like a Swiss watch and Gary and Max put in many hours of fine tuning, grunt and strategy to make the season a ton of fun. 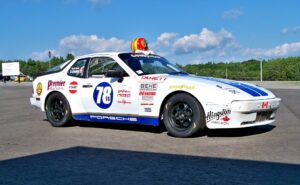 Turn the page to 2013, and we’re gearing up for another series assault, commencing again at the PCA Clash at the Glen May 31 to June 2. Then we plan to run at the VARAC June 14 to 16 Canadian Historic Grand Prix in the 944 Cup race* (fellow UCR member Gord Ballantine’s Porsche 944 made the promo Poster!), then the next UCR-hosted PCA Club Race at Mosport (CTMP) and maybe another event in Quebec with the 944 Challenge Canada. Come out and join us, we love help, I mean company!

Thanks to Emily for inviting me to submit an article. As well, without the assistance from our supporters; Premier Bulk Services, Hingston Fabricators, Auguste Automobiles, Gabriel Maintenance with Miller Oils and Comet Chemical Company we wouldn’t have been as successful.

* There was a rumour going around that one or two of the original Rothman’s drivers would possibly be competing in the 944 Cup race, not confirmed but man would that be cool to see!

Previous articleRoad Trips May 2013
Next articleObjects of Desire May 2013

THE PORSCHEPHILE: The Treasurer’s Carrera Banana