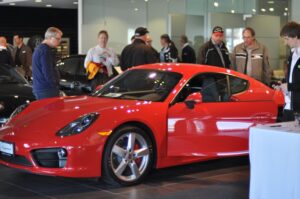 What better use of this first real spring day than to fire up your Porsche and head out to London for a UCR Social, hosted by our friends at Porsche of London. This wasn’t just any UCR Social; it was the first to be held in the western area of our Region and it was planned for this date so that our members could witness the unveiling of the new Porsche Cayman. Well before the scheduled start time of 9:30am members began to congregate in the Porsche of London showroom, admiring the fabulous 911s, Boxsters, Panameras and Cayennes and enjoying the dealer’s hospitality. It didn’t take long for the showroom to fill with nearly 50 UCR members and a few bemused visitors.

Chris Leavens, the Porsche of London dealer principal, welcomed our club and introduced his key staff who would be on hand to answer questions and chat with our group. UCR Vice President Arthur Quinlan and Director Mike Bryan, thanked Chris and explained how this event had come about. The two main factors were: First, our wish to co-operate in areas of mutual interest with Porsche dealers and others who sell and service the vehicles we love, and second, to provide club events for UCR members outside the GTA. 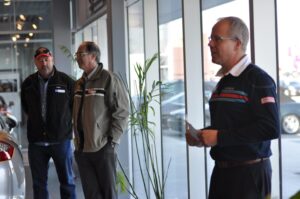 And then it was time for the main event—the unveiling of the new Porsche Cayman. With a flourish, Chris Leavens whisked off the silky shroud to reveal this sensuous new model in luscious red. With Nick Rajewski on hand from Porsche Cars Canada, plus Chris and his team, there was every opportunity to learn about this latest evolutionary step in the Boxster family. After fielding a wide range of questions about the new car, Chris invited our group to test drive it. Suffice to say that when you thought you were already driving one of the world’s best cars, you were now driving a significantly better one around the block in the suburbs of London.

Thanks to Chris Leavens and his team for their warm welcome and to our western-based members for supporting this first social in London. A UCR/Porsche of London Fun Run is scheduled for the fall and we hope that members will propose other local events so that they can enjoy the camaraderie, learning and fun that are generated whenever Porsches and their drivers come together.