Not quite 24 hours at the Nürburgring—Part 1 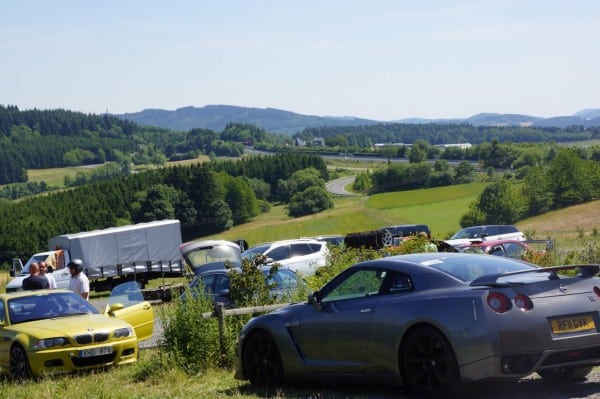 My most recent trip to Germany may have taken in the fast Autobahns and the wonderful mountain passes in the south of the country, but there was something far more thrilling to the north awaiting my attention.

Close by the industrial heartland of that country is the world famous Nürburgring, the 73-turn, 13.7-mile road which stands as a testament to the European conviction that the quickest way from point A to point B is not necessarily a straight line. The road twists and turns up- and downhill to give an overall elevation change of over 1,000 feet from lowest to highest points. And you thought Mosport had elevation changes! Note that I have said ‘road’ not ‘track’—legally the Nordschliefe is a toll road not a track—although truth to tell it would be impossible to make a map reading error and find yourself in the middle of the 24 Hours by mistake!

Sports car manufacturers will often benchmark their cars there and quote the seven-minute plus X-seconds lap time as an advertising ploy. The outright lap record is currently held by that British manufacturer of barely legal road cars, Radical. Michael Vergers drove the Radical SR8LM to the track from the UK factory and then recorded an astonishing time of 6.48 during an open session with traffic! The big guys rent the whole track and close it and it was that way that Porsche reeled in a 6.57 recently with the 918, a third best ever time behind another Radical. Nothing else comes close. 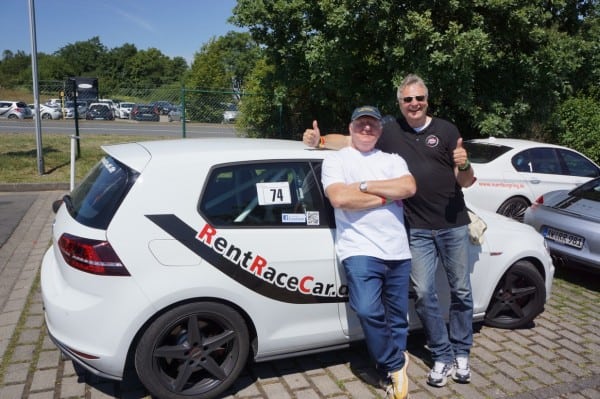 So what does such a hallowed and notoriously difficult road course hold for me? A track day of course! It just so happened that I could time my exit from the Macan collection expedition to coincide with a full day at a closed track day session run by the British outfit Destination Nurburgring or DN as they are commonly known.

But surely Miss Martini was left in Canada I hear you thinking? Well, yes, she was, but I was not about to let a detail like that spoil the story.

Enter Heidi Kleen. Don’t confuse Heidi with Sabine Schmitz, also known as ‘Queen of the Ring’. Actually Sabine will, for a mere 600 Euros, give you the ride of your life for a very hot lap in her GT3RS Cup. Heidi Kleen and her husband Theo have been in motorsports most of their lives it seems and started the very first company to offer track cars for the Ring. That was 10 years ago. Today, Rent Race Car runs a fleet of “about 50” well-prepared cars that can be rented for Ring laps or laps at several other tracks. They are, without doubt, the best-established and most respected outfit at the Ring. The cars are fitted with rollbars, good seats, upgraded brakes and suspension and sticky tires. From a Suzuki Swift, the range runs through several hot hatches not available in North America, to the much vaunted Toyota/Subaru FRS/BRZ coupe to the new Cayman, E93 BMW M3 and 997 GT3.

I tried to reserve a Cayman, but one was not available. But I received some sage advice from John Dean Sr, a wily, old-time race driver who has won numerous championships in the USA. “Andrew, if you want to enjoy your first Ring experience, get a low-powered car,” he advised. “You will not be going fast, believe me, and a low-powered car is a good way to stay out of trouble and have fun.”

Alrighty then, that’ll be the 250hp Golf 7 GTI for me. A good choice it turned out, much cheaper than the Porsche, faster than I needed, and a trip back to my days of front wheel drive. Well not so much FWD nostalgia really, more a revelation at the way computer-aided DSC, PSM and all those other acronyms can change the basic handling of what should by rights be a wildly understeering FWD into almost completely neutral. Would I want a Golf long term? No. The electronics are far too intrusive in their operation even when you are far from the limit. But it was a very good car for a first drive at the Ring. 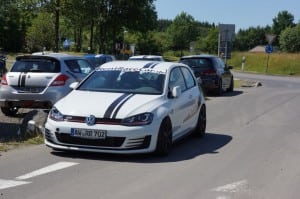 Before heading over to Germany some research suggested to me that an instructor would be a good idea. Now that I have been there I would say that if you have track experience, no matter how much, an instructor is essential. I really do mean ESSENTIAL. You have experience and you can drive competently, yes? It does not help at the Ring; in fact, I suspect that usually the complete novice will be safer and have more fun because he is not going to drive at track speeds. We might be tempted to do so and that can lead to big trouble. Several drivers, including John Dean, told me before I headed out to treat the place as a nice piece of fast country road, not a track at all. Without an instructor who knows the place intimately, that is also very good advice.

So what instructors are available and what are they like? Well, DN will provide them on an ‘as available’ basis, free of charge. That will probably get you a fellow trackie from the UK or Germany who has made hundreds of laps.

Or they can provide pros at a cost. I asked Heidi for a coach to complete four of the 16 laps I paid to complete in the Golf. She introduced me to a jovial 6’ 6” giant, Martin Dose, a German racer who has, by his own estimation, completed “oh, far more than 25,000 laps”. Do the math: That is over 550,000 km! Sound improbable? Consider this, he has driven the 24 Hours there 19 times since 1978, he has been a pro rally driver and racer and at 59 is still very active in the sport. He is one of only 25 FIA licensed instructors in Germany. But probably the very best thing about Martin is that he is a real gentleman in the true sense of the word, and he has a terrific sense of humour. 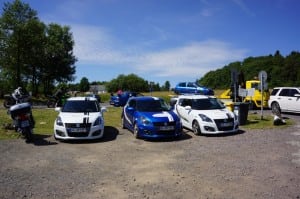 There are many ways to experience the Ring, but I would say that there are basically just two main categories, the Touristfaren or the Track Day. The former is the infamous tourist drive where motorcycles, fast cars, slow cars and even school buses will turn up in the evening for the ‘tourist drives’. Not for me that one.

Don’t miss the conclusion of Andrew’s adventure at the ‘Ring in next month’s Provinz!

How To Join UCR DE Programs and PCA Club Racing

Shakedown at the Pines