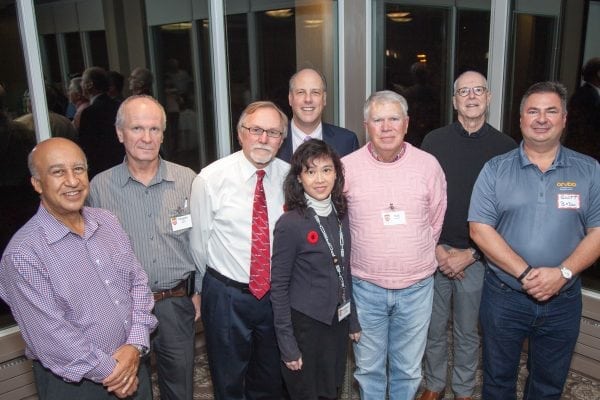 Forty-one UCR members and guests attended this social immediately following the 6:00pm Business Meeting at Islington Golf Club on November 8, 2016. Members dined on a choice of two pastas: fusilli with chicken and cannelloni with tomato sauce. These were accompanied by an Italian garden salad and warm garlic toast. Individual tiramisu with coffee and tea completed the meal.

After dinner, newly elected 2017 UCR President Kathleen Wong addressed the audience with some background on her involvement with the club, joined in 1998. Michael Pohlmann, UCR’s new Vice President and interim Treasurer, also joined UCR in 1998. Michael has owned several Porsches and participates in DE with a 944 turbo and he co-hosted a Fun Run in 2016. Michael also proudly owns one of the limited edition, 60th Anniversary PCA 991 Club Coupes. He joined UCR’s Board last year and served as Treasurer prior to his election to the position of Vice President.

Kathleen then introduced Neil Dowdell as UCR’s 2016 “Enthusiast of the Year” and also welcomed Neil to his new role as a Director of the board. Neil is a 15 year member of UCR and has volunteered at many UCR CanAm Club Races over the years. Neil has also hosted several Fun Runs. He currently owns two Porsches including a yellow 997 C4S that he drove to this event.

On the subject of PCA Club Racing, Terry Cassan will be taking on the role of UCR Club Race Co-Chair in 2017 and he will be working with Walter Murray. The 2017 event is expected to include about 20 driver/ entrants in the PCA GT4 Clubsport Race Series. In addition, there will also be a fourth day of on-track excitement with a Test & Tune day scheduled for the Thursday before the race weekend.

Thereafter, Kathleen invited the other members of the UCR Board of Directors to introduce themselves to the audience. These included new Board members Scott Bodo and David Walker as well as returning Board members, Peter Oakes and Gregory Sachs. Kathleen then introduced Provinz Editor Randy Gananathan who has done a great job with Provinz and he’s actively looking to recruit a new Advertising Sales Manager to his team of volunteers. Other roles at UCR that need to be filled include Treasurer, Webmaster, Socials Chair/Co-Chairs and 2017 Annual Banquet Chair.

UCR Club Photographer Michael Coates then narrated a slide show of his favourite photographs that demonstrated his passion for cars, racing, people and Art Deco. Michael first started into photography in the UK at age 17 and he reckons that he could have bought a Porsche with the investment he’s made in photography since then. Michael described the stories behind his images, and the many happy memories that they represent. He also showed us some images from various club races over the years – where he always seemed to be in the right place at the right time to capture some pretty spectacular moments.

Mike then did a call for new volunteers to help make the many club activities happen. No special skills, with the exception of passion and enthusiasm for all things Porsche, are required for most volunteer roles. UCR is looking for volunteers to assist in running our monthly Socials, Provinz advertising sales and advertiser management, the annual Club Awards Banquet, another Family Picnic and Concours for the summer of 2017 and a new Webmaster. Help make your club better by contributing to the activities that we all enjoy participating in.

To conclude the evening, Hostess Dagmar Rhuel-Pohl gave away a number of Porsche-related door prizes. Thanks to Dagmar and the other Socials volunteers including our own Mario Marrello, who looks after ClubRegistration.net and Kimberley Viney for her event management skills onsite registration with Michelle Gananathan.