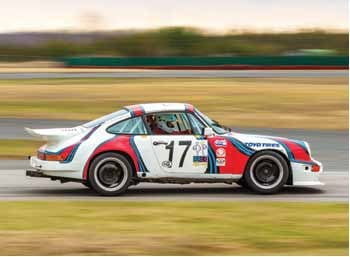 If you haven’t seen Caddyshack, this column may not be for you. So, if you decide to check out the classic movie before reading on, we’ll wait.

If you can’t wait, here’s a synopsis of the relevant bits: Bill Murray is a golf course groundskeeper tasked with exterminating a pesky infestation of groundhogs (or gophers; they all look the same). Like Wile E Coyote who drove himself crazy trying to catch the Roadrunner, Murray’s character Carl is obsessed with his task. And the groundhogs just laugh at him. Until he takes desperate measures and essentially blows them all up.

What on earth does this have to do with 911 racecars?

The last VARAC race event was at Calabogie Motorsport park. This is a long track with 21 corners, carved out of the Ottawa Valley wilderness. Once you leave the front straight you’re essentially out in the wilds, on your own. Local lore reports bear sightings, deer, wild turkeys. You name the critter, it’s probably taken a tour of the track at some point.

This was my third time there; my first in the 911. I was pretty awful. Slow and hesitant. Not loving the track or my car at all.

So there I was tooling around at the very back of the pack. So far back I was in another universe, orbiting at a leisurely pace. It was solo lapping with the track to myself while the rest of the pack screamed around in the distance. It was a lovely Sunday morning. The air was clear, the sun shining. I was quietly reciting my mantra of the day: “Please let it be last lap. Please let it be last lap.”

I negotiated the tricky Temptation and the throw-away corner, Deliverance, clearing a small rise and slight righthander. As I put my foot to the floor for the straight, I spied movement at ground level in my left peripheral vision. A brown blur made a swift move to the racing line, and BANG, it went directly under the centre of my car.

Although I had time to see it coming I neither lifted nor braked nor swerved. Right or wrong, I figured hitting a groundhog while under full acceleration was probably a better choice than upsetting the car and ending up in the weeds—or worse.

After the bang I could see nothing in the rearview mirrors. Slightly shaken, I confess I slowed a bit, concerned the rodent had damaged the car.

It’s amazing how fast word got round the marshall stands. Only a corner or two later I could see them doing the car check—bending down to get a peek at the underside, looking for leaks or loose parts. I slowed to let them, figuring they’d black flag me if they saw anything amiss. But I guess they saw nothing because I was allowed to continue.

Coming over the crest at Deliverance on the next lap the marshall pointed the debris flag at the limp corpse lying directly on the racing line. It felt almost accusatory. Or was he congratulating me?

It’s been a great temptation in the weeks since to put a little groundhog decal on my fender with an X through it, and add the word “Killer” in WWII airforce style to the roof above my door.

Who knew a little 911SC could be such an efficient killing machine? The car was not even scratched by the impact, and the dead ’hog looked peaceful, as though he were simply napping, mid-track. No blood or gore, nothing stuck to the car’s undercarriage. A clean kill.

Not that I want to make a habit of dispatching small (or bigger) animals while racing. I’d really prefer to use my car to chase down and pass my fellow racers, rather than a killing machine.

That said, should Bill Murray ever drop round, looking for a way to eliminate a gopher problem, I’d probably help him out!

Nothing Short of Marvellous