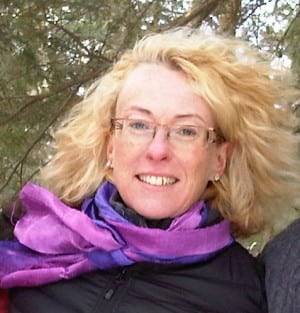 A few years ago, pre-944s, I decided I wanted a Porsche 911. It was going to be an older one, ideally an RS style, or a wide-body 930 with a big tea-tray spoiler. These are the iconic cars that have always thrilled me.

My search proved frustrating. Predictably, the cars in my price range were all fatally flawed. Rusted out, cheese-filled or smoking, none had what it would take to be my car. I had become increasingly doubtful I would ever find the right ride.

Then one day a large, brown envelope arrived in my mail. It bore my father’s return address. It was strangely lumpy, and when I opened it a shower of dirt poured out over me and the kitchen counter. What kind of joke was this? My dad is known for sending congratulations cards and notes to his adult kids for sometimes random jobs well done or races won, but I could think of no recent accomplishment (or misdeed?) that would have warranted a bag of dirt. 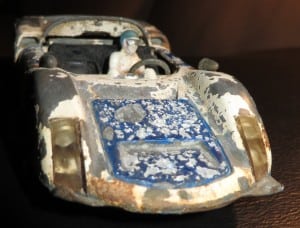 Peering into the envelope I spied a piece of paper and pulled it out. It simply said, “I know you’ve always wanted one of these. Love, Dad.”

Carefully pouring the rest of the dirt onto a newspaper, I finally found the prize. It was an encrusted, rusted dinky toy. Its low, flat profile was barely recognizable as a car, let alone a Porsche. Unsure of what I had, I ran it under the kitchen tap. Dirt and sand ran freely down the drain, but it the little object retained its mystery.

It took a couple hours over the next few days of soaking and scrubbing to reveal what Dad had sent. It WAS a Porsche–a Corgi Toys Porsche Carrera 6 (Type 906—a racing car), made in Gt Britain (according to the now clean underside). It even has the Porsche crest embossed on it. Traces of blue and white paint are all that remain of the original livery, but the Perspex canopy over the cockpit is intact, and the driver, in his blue helmet, still sits rigidly waiting for the green flag to drop. Although the clear rear cover is missing, the engine compartment does open, flipping backwards to reveal the flat six nestled right behind the driver. Unfortunately, all four tires have long since disintegrated.

I wonder if my dad had any idea how much this little thing he found while digging in the garden would mean to me when he playfully dumped it and a shovelful of dirt into that envelope.

Every time I look at it on my kitchen display shelf I think of him and how he instilled a love of cars and driving in me from the youngest age. He taught me to drive, change a tire, check the oil and to always have a shovel in the trunk. Dad may not have been the biggest gear head, but he liked cars, loved driving and was always out in front of the trends. We had Peugeots, Volvos and Volkswagens before they were household names. He instilled the interest that turned me into the kid who could name every model of car on the road and ultimately into the adult car writer and racer I have become.

I still want that 911; never did find one that suited me. But I’ll always have the 906. It is my first Porsche and it’s the only one I will keep forever. Thank you, Dad.