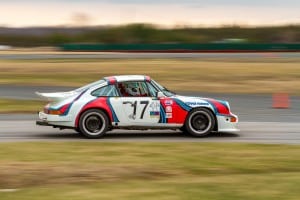 Sledgehammering G-forces snapped my head back against the hard shell seat as I held on to the diagonal roll cage brace with both hands. Wind knifed in under the side of my helmet, delivering an excruciating jet of air directly to my right eardrum. My feet scrabbled for purchase on the slippery footwell floor. Lying practically on my back in the seat, all I could see was sky. It felt like flying, and we entered Turn 2 at a pace so unreasonably rapid I was certain we’ d be getting airborne soon.

Closing on a street car going up the Andretti straight was an exercise in both frustration and awe. The poor guy ahead of us in his Altima barely had a chance to know we were there before we were on his bumper. Waiting for the signal to pass seemed an eternity, and then instantly the silver Nissan was a mote of space debris as we made the jump to lightspeed.

For the driver of a relatively sedate 200hp 911 racecar, riding shotgun in a Radical SR3 RS was an eye-watering experience of joy, pain and revelation. My brain was reduced to pointlessly wondering why I had committed to this insanity wearing only short sleeves. In the unlikely event of a crash, that would be the least of my worries. Nonetheless, I was relieved no bees bumbled into our path.

This Radical is a 1,100-pound open cockpit, closed-wheel racecar, in this case powered by 1,300cc motorcycle engine—there are other powertrain options. It’s a Go-Kart on Red Bull, cornering in a way that makes even the fastest street-legal Porsche seem tame.

If you enjoy speed and G-forces, a brisk ride around the GP track at CTMP (Mosport) in a well-handled Radical might destroy everything you ever learned or enjoyed about driving your Porsche on the track. In fact, I’ve observed that quite a number of Porsche drivers have graduated to Radicals when their GT3s and Turbo Ss become too boring to drive.

Imagine sliding into the cockpit of this low-riding machine. As with any caged, tiny, low car there is an art to entry and exit, and once inside and belted in, you can barely see past the nose. As a passenger observed, “I’m looking up my car’s tailpipe.”

Driving it is simple enough—there’s a clutch for use in the pit lane, but once rolling it’s equipped with paddle shifters and an auto-blip feature that matches the revs for you. Hard on the brake and left paddle for the downshifts, hard on the gas and right paddle for the ups. Watching the driver gave me a small idea of the amount of work required to pilot the rocketship—there was a tiny amount of correction going on through the corners, combined with absolute calm concentration.

What’s mind-blowingly different is where you enter the corners and how fast. Turn 8 for example, at the end of the backstraight, takes a fairly early apex for my car. Brake after the bridge, turn in from mid-track to clip the first set of turtles, then onto the new, sticky pavement and squeeze on the throttle through to 9. In the Radical, you scream up the straight, foot on the floor until you are past the first apex of 8, way over in the marbles on track left, then lift and turn 90 degrees to the right. I could be exaggerating a little about how late the turn in is, but only a little. Watching the driver’s feet through there, I kept waiting for the right foot to move…and waiting…and waiting… Just as I figured he’d gone to sleep, we suddenly turned.

It was stunning. The grip and downforce exerted by this car are astonishing, as are the G-forces you are subjected to as a result of them. We didn’t go as fast as the 1:20-something laptimes the car has been recording in races this year, but the thrill of exceeding the speed limit of my car so dramatically won’t soon fade.

Don’t waste money on a rollercoaster ride this summer; get Radical!

2017 DRIVEN2SMILE: From a UCR Volunteer’s Perspective