A tall red and gold trophy sits on my coffee table, glinting a little in the weak January sunshine. Beside it rests a much smaller, less shiny plaque.

These are the fruits of my racing labours last summer; and each time I glance their way I’m reminded of good times, sunshine and friendly competition.

Car 17, my Martini-liveried 1982 911 SC, and I somehow managed to win the overall championship in the Vintage Automobile Racing Association of Canada’s (VARAC) G-70 G class, along with first prize in the Toyo Tires contingency contest in the G-70 group overall. I say “somehow managed” because we achieved this feat without a single podium finish, all summer.

At first it seemed to me a little odd that a champion could be won this way, but then it was explained that the club set up the points system deliberately to reward participation.

And participate I did. From the first race weekend when I showed up at the track all alone with my new trailer and tow pig for the test day, right through to the penultimate race event at Mosport (CTMP), I was there and racing.

My car was unbelievably reliable; over the course of the summer we had two DNFs (did not finish), and one DNS (did not start).

The first DNF was when my splitter came loose at the entrance to turn 8 at Mosport, dragging on the track with an ungodly clatter that quickly forced me into the pits. Although it was early in the race, there was no way to get it back on or off quickly enough to return to the fray. By the time the rest of the team returned to our paddock spot, I was on the ground wrestling with the sheared off bolts.

The second DNF was a little more dramatic—and expensive—and ended my season. Just at the entrance to turn 5a the car quit running. It wouldn’t re-start but I was able to coast up the hill and around the corner to the 5b run-off area where I rolled in behind the barriers and parked.

It’s a great vantage point for watching the turn 5 action, but not really where you want to spend a race.

Unfortunately, that was the end of my racing season. I reprised my role as pit crew for my brother at the final race weekend of the season. 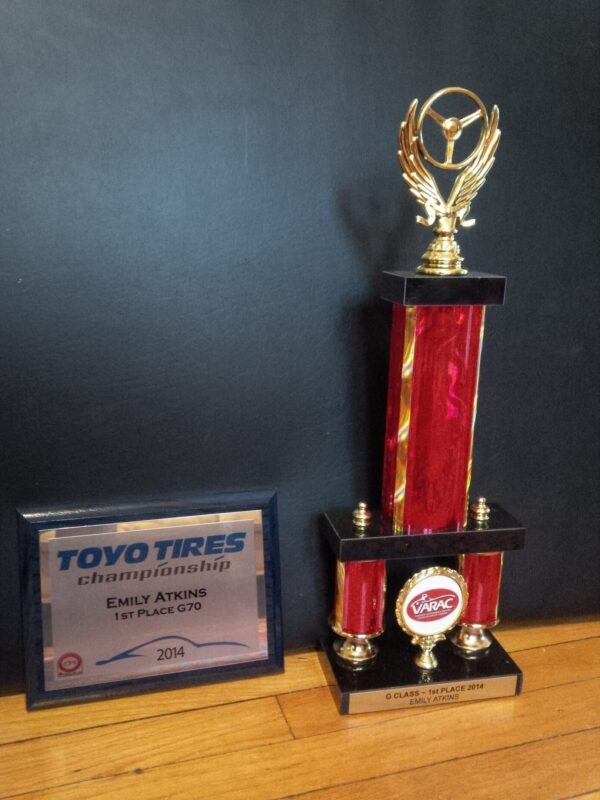 Ultimately we discovered that cylinders 1 and 4 had broken rings, and a minor overhaul was required.

Now it’s back to the shop for some more work on the car–watch this space for details—before the 2015 season starts.

I doubt any subsequent racing season can match the thrill of the first one, with or without trophies. The learning curve, the excitement, and even the frustration all commingle into an intoxicating blend that I know I’ll be chasing for years to come.

Yet every year will come with new challenges and— hopefully—highs. They call racing the slippery slope, and it is, but I think we’re actually climbing up it!