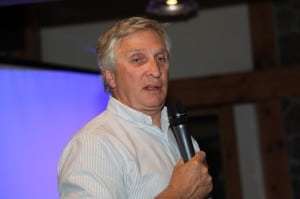 I would like to thank Peter Hoffman for suggesting Peter Cheney as a speaker for a UCR Social. Peter Hoffman’s article is below. You can feel Peter’s excitement about one fantastic evening.

I would also like to thank Kim Viney for her invaluable help in pulling off a great evening, and to Michael Coates for capturing the Social in photos.

If you have any ideas for Socials or venues – please email me at: socials@pcaucr.org. I love ideas and they come to fruition!

We had an excellent turnout for our October Social, where UCR members were thoroughly entertained by Peter Cheney, a national feature writer for the Globe and Mail, Drive section columnist and three time winner of National Newspaper Awards.

Peter regaled us with words and pictures of his colorful life, from early times as an “army brat” in Germany. It was there that he initially acquired his love for Porsches through visits to the 356 Speedster factory.

Peter continued to be a “gearhead” growing up, spending some time as a Porsche mechanic in Vancouver before going on to be a reporter and investigative journalist first with the Toronto Star and then with the Globe and Mail. 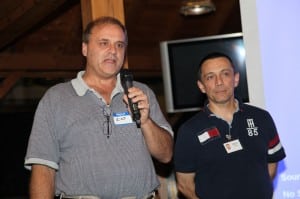 Isi Papadopoulos of the Trillium Chapter of the BMW Club of Canada and Mario Marrello, UCR Autocross Chair.

During all this time, Peter continued to be fascinated by all things moving, from motorcycles and cars, to hang-gliders, ultra-light airplanes and gliders. Peter even spent some time in Olympic class catamaran sailboats. He kept pursuing these interests and one day he thought, would it not be great to combine his work in journalism with his love of cars. He proposed the idea of an automotive column to the Globe and Peter’s dream career was launched.

For over an hour, he held us spellbound with his engaging stories and photos: hurtling down the Autobahn in a 991 C4S at 290 km/h, hang-gliding off a cliff, viewing historic vehicles in the Porsche factory museum, his son crashing a tester 997 Turbo through the family garage door, soaring above the valley in a single-seat glider, completing the Tail of the Dragon (unscathed) in his beloved Lotus Evora, driving 1,800 km top down in a Boxster with his even more beloved wife in the passenger seat cocooned up to her nose in an arctic sleeping bag, and riding one of his very early set of wheels, a pedal car with fins and painted graphics. 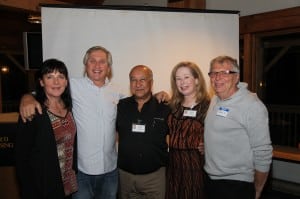 Peter drew us into his life and made all of us feel like his personal friends. We thank him for a most enjoyable evening.