Oktoberfest, A Birthday, and Gas Pains 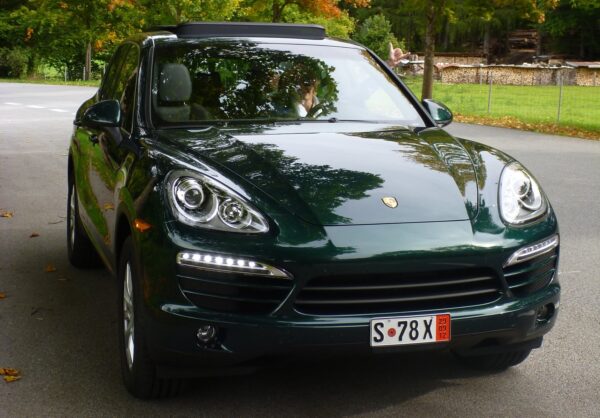 2012 was a big year for me–a big birthday year, that is—so I wanted to celebrate my big birthday in October by doing something extraordinary. Back in February, I started thinking about what I could do to celebrate, and I was toying with the idea of buying myself a new car–well I made that a reality. Not only did I order myself a brand new Cayenne, but that was just the beginning of what turned out to be an amazing birthday experience.

The folks at Downtown Fine Cars told me that my Cayenne would not be ready for pick-up until August. Yikes…a sevenwait! So then I couldn’t help but remember that Oktoberfest in Munich takes place at the end of September. Hmmm, just one extra month. Should I? Shouldn’t I?

Yes, I definitely should. I decided to turn my Cayenne delivery into an experience, so I opted for European Delivery and postponed the pick-up to coincide with Oktoberfest at the end of September. Once my friends and family all heard this, they jumped on the Oktoberfest bandwagon and soon thereafter we were a group of 13 people. But let me first tell you about the Porsche European Delivery experience. 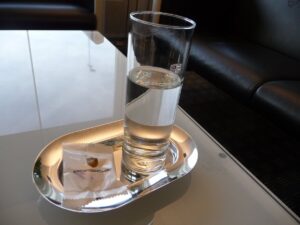 My parents and I flew to Frankfurt and made our way down to Stuttgart, where I had made arrangements to pick up my Cayenne. Cayennes are actually built in Leipzig, but we didn’t have the time to go all the way up to Leipzig and back down to Munich, so I requested a Stuttgart pickup. We arrived at the factory in Zuffenhausen and entered the lobby for the “Werksabholung”. There they brought me a glass of water and a small package of Porsche branded gummi bears. Wow—could my day start any better than this?

We were then all given a badge that allowed us to basically walk around anywhere in the Porsche complex. I felt like Wayne & Garth from the movie Wayne’s World when they were given the backstage passes.

The tour took us through various buildings, from where the engines are built, to where the leather seats and trim are customized, to where the “marriage” takes place (the shell of the car is attached to the engine). Imagine electronic robots running along invisible tracks on the floor, knowing exactly where and when to stop, which elevator to take up and which floor to go to next. I wasn’t allowed to take any photos inside the buildings, so you’ll just have to trust me that the factory was immaculately clean and very, very cool! Our tour ended with a delightful lunch, and of course, the grand moment when I got to drive my Cayenne off the parking lot. This is when some real adventure started.

We made our way to the highway bound for Munich, and about one hour into our journey, all of a sudden I saw a regular car in front of me with a digital sign in the rear window saying “Polizei folgen” (Police, follow). I thought to myself, that’s a weird digital sign, so I kept on driving. Then the passenger window rolled down and an arm came out and attached a blue flashing light to the top of the car along with the normal siren sound. Oh oh…I think I’m being pulled over. I was barely going 130km in a 120km zone. Are they that strict??? 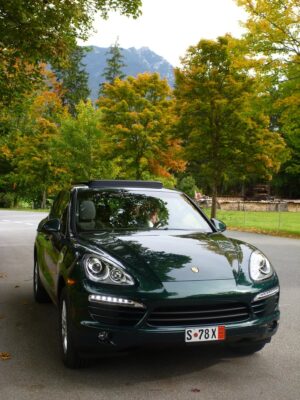 We pulled over and the two police officers came over, showed us their badges, and asked me for my license and ownership. I gave it to them and asked them what I had done wrong? Turns out they had never seen a jet green Cayenne with bumpers like mine before, and the license plate also looked foreign to them. Upon examination of the paperwork, they saw that my car was built for Canada, meaning different bumper specs (for government regulations), and of course, my license plate was a temporary one. The main job that these police officers do is look for stolen vehicles that are then sold to Russia and other countries. Once they were satisfied my car was not stolen, they then eased up a bit, took a step back and said “cool car”. I couldn’t help but grin from ear to ear.

We made our way back to the highway and continued on to Munich. As you can imagine, streets and parking garages in Germany are not built like they are in Canada. For every lane in Canada, they easily create two lanes in Germany (or so it seemed). So let me just say that in a few instances I literally had to fold in my side view mirrors to make it through a tight street. In most parking garages in downtown Munich, I had to make 20-point turns to get in and out. Talk about minor heart attacks.

Luckily, after a week of celebrating Oktoberfest, seeing the Zugspitze, and touring Schloss Neuschwannstein, it was finally time to return the car to Stuttgart for its journey home to Canada.

My parents had left already so I drove my two friends from Munich to Stuttgart where they had to catch a train to Paris. This simple drive seemed easy, until we ran in to a few snags. As my gas gauge slowly went down….down…..down…… and my friends’ train departure was fast approaching, doesn’t the highway come to a total standstill because of a major accident. All lanes blocked. After sitting idle for about 30 minutes, a bunch of rebel drivers started using the side of the road to get to the next exit off the highway. I decided to follow suit (after all, I was in an SUV and I can go “off-roading”). We got off the highway, engaged the GPS and set it for the Stuttgart train station as fast as possible.

I managed to get my friends to the train station with 10 minutes to spare, but my bigger issue was that my Cayenne now had 15km of gas left in the tank. That’s it. The warning light had come on about 100km ago. Given that I had no idea where a gas station was, and the only thing programmed in the GPS was Zuffenhausen, I decided to take a chance and drive back to Zuffenhausen. 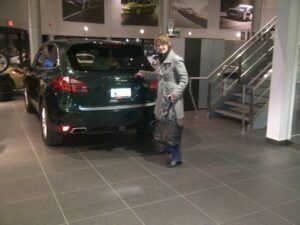 I made it to Zuffenhausen with what felt like only fumes left in the car and asked the lady in the office where the closest gas station was. When I told her I only had two kilometres of gas left in the car, she gave me a smile that I interpreted as “dude–there’s a gas gauge in the car–didn’t you see it?” Turns out the gas station was two blocks away. So out I went again, and drove on my last fumes (thankfully downhill) and I made it to the gas station. Who knew that having gas would provide so much relief.

After a quick visit that night with my cousin who lives in Stuttgart, I then officially dropped off my Cayenne the next morning at Zuffenhausen without any scratches.

Fast forward a few months. I was busy sorting through thousands of photos, and prepping my garage for the arrival of the “new baby”. My excitement was building by the day. There’s an expression in German, “Vorfreude ist die Beste” (anticipation is the best), but one thing I’ve noticed about this entire experience is that I really wish there would have been a tracking number on my car that I could have followed its journey on the boat, then on the train from Halifax to Cobourg, then on the truck from Cobourg down to Toronto. By not knowing exactly where my car was, or when it would arrive, I didn’t get the complete satisfaction of that Vorfreude.

At last, on November 12, I got the call that my car would be ready for pickup on the 14th. It had finally arrived! It was all worth it.