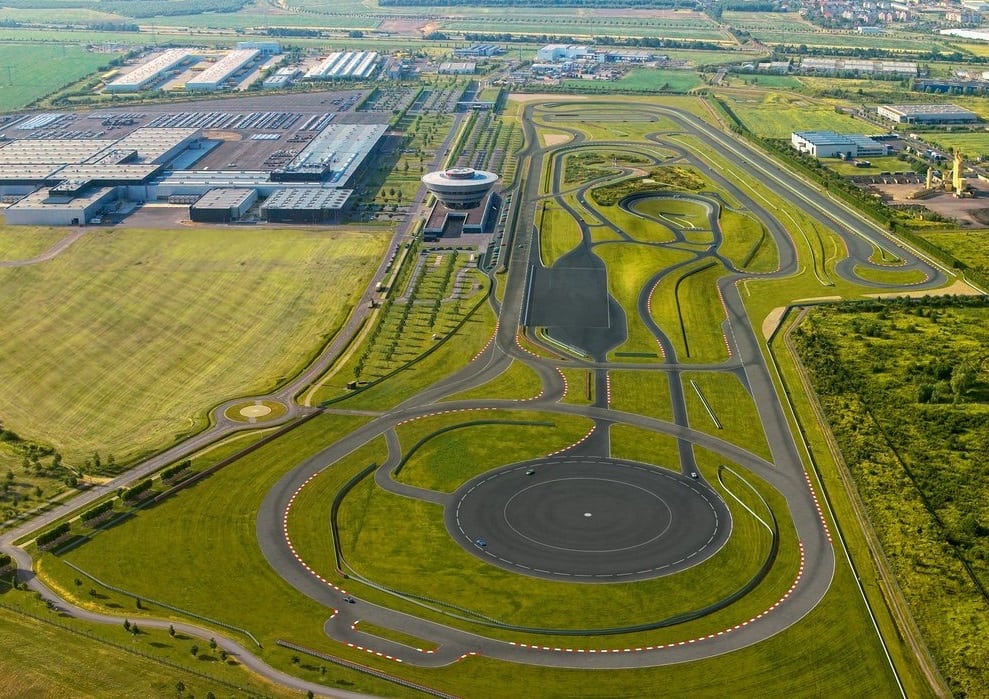 June 16, 2014 is going to remain one of those amaz­ing days of my life.  This last full day of a European vacation with my wife Jane, became the highlight of two important aspects of my life currently: Porsche and baroque music.

How did we find ourselves in Leipzig, in the for­mer East Germany?  It’s probably not the first place one would choose to visit but it is a city rich in his­tory, both old and recent.  We had started our trip in Versailles – more specifically at the Royal Opera House located within the palace which the Sun King, Louis XIV, had created to show the world his magnificence.  We were there to witness operatic history being made by Toronto’s Opera Atelier.  After that, it was a week in London to see our new grandson, then off to Berlin for a 10 day Viking River Cruise up the Elbe, with stops in Wittenberg and Dresden, ending in Prague.  From there it was over to Leipzig by train.

Besides being home of the Porsche facility where the Cayenne, Panamera and now the Macan are assembled, Leipzig is the place Johann Sebastian Bach spent the last 27 years of his life as music director for the city’s Lutheran churches.  He composed many of his most famous works here and to celebrate that history, theprestigious Bach Fest annually brings together hundreds of musicians and thousands of music lovers from around the world for two weeks every June.  Our favourite band, the Tafelmusik Baroque Orchestra of Toronto had the great honour to be selected as that year’s “orchestra-in residence” for the festival and for a group that specializes in baroque repertoire, of which Bach is the foundation, to play his music in the church at which he worked and where he is buried.  Well it simply does not get any better.  Jane and I were there to be with our dear friends for this incredible occasion.

Several months earlier, through Porsche Canada, I had made contact with the customer representatives at Porsche Leipzig and had made the arrangements for Jane and myself to participate in the “Discover Porsche in Leipzig” programme.  This includes a Factory Tour, time on the FIA certified test track (in a Cayman, of course), off-road running in a Cayenne (only if I wanted), and a three-course meal with a “spectacular 360o panorama of the entire Porsche grounds” from the Customer Care Centre which contains a selection of historic vehicles and a fully stocked Porsche Design Store.  Sounded amazing, and like all things Porsche, it was pricey; however, I was very much looking forward to it.  But was it going to live up to our expectations? 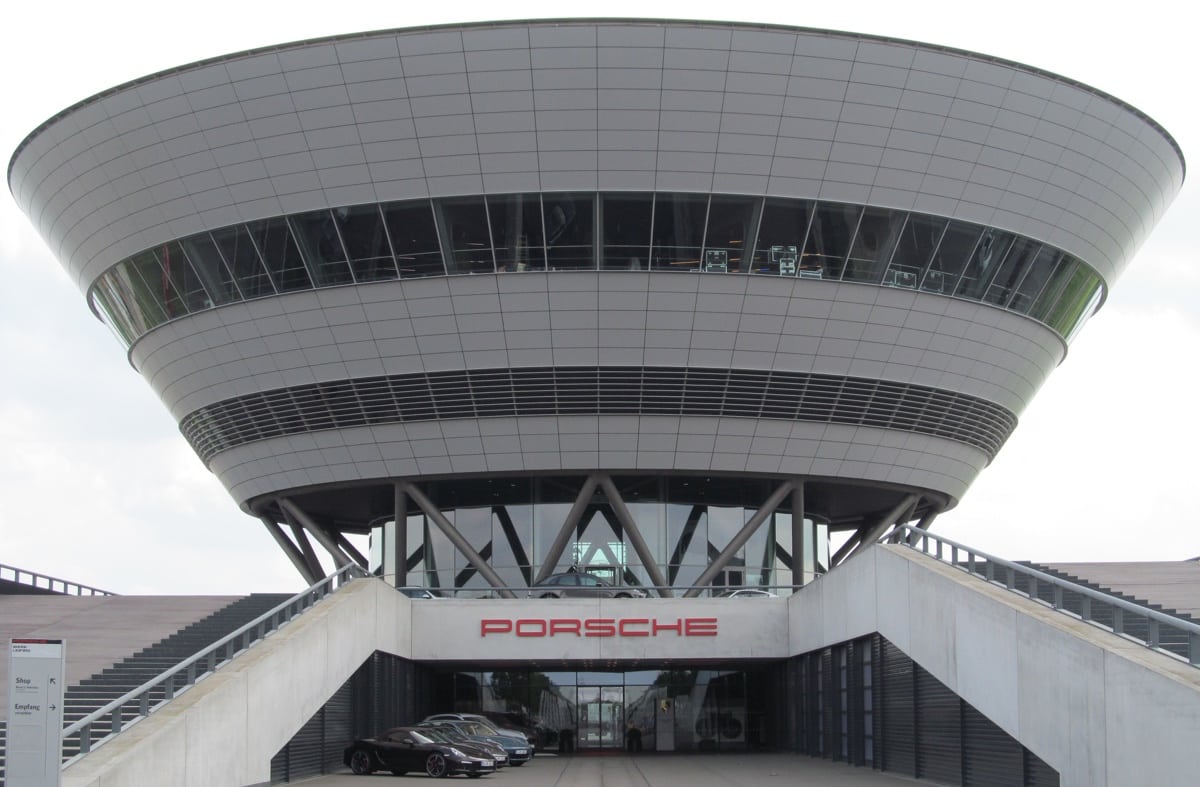 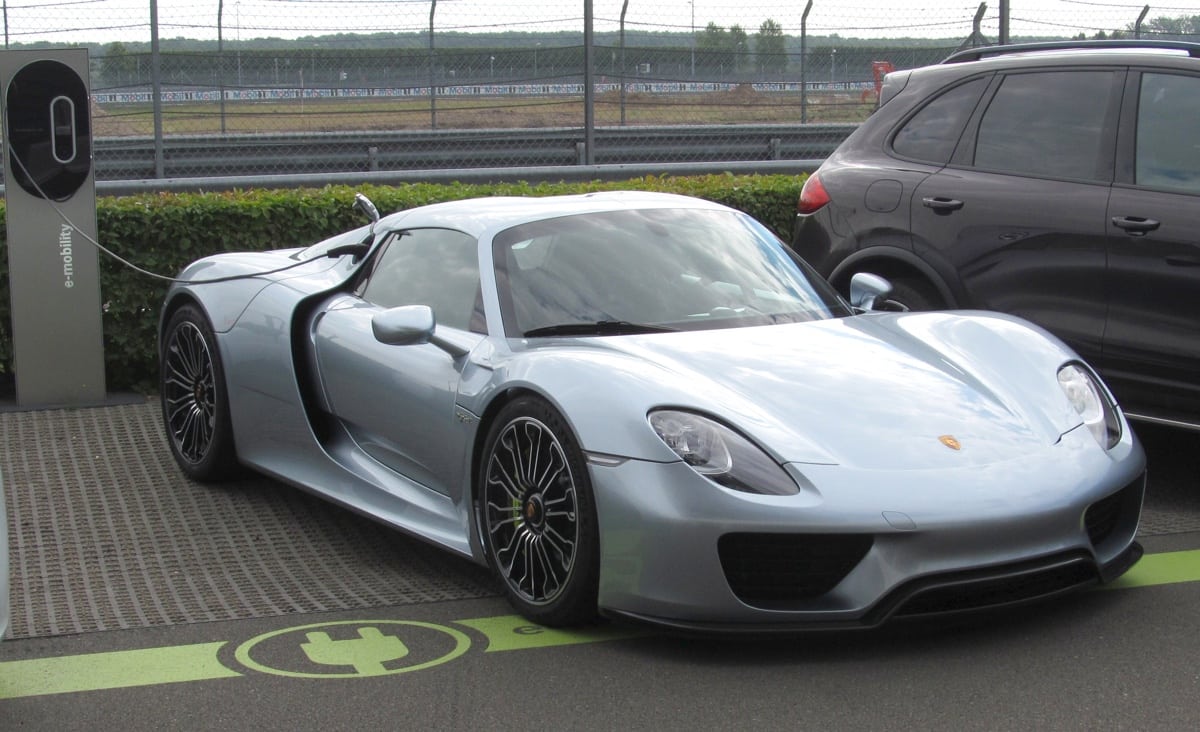 918 Spyder waiting for customer pick up.

The Porsche facility is a little north of Leipzig’s historic downtown, out in the develop­ing farmland surrounding the city.  The weather was ideal – partly cloudy and about 20oC. We arrived bright and early just before nine; our scheduled start time, and were greeted by two lovely ladies at reception, who escorted us to a nearby lounge where they provided tea, coffee and some delicious sweets.  As we waited for the other members of our tour to arrive, I noticed a 918 Spyder parked at a charging station, just outside the glass doors which lead to the track.  Having never seen one of these creatures “in the flesh”, I took the opportunity to feast my eyes.  This beauty was here as part of the customer factory collec­tion program.  Later, we saw a couple beaming as they were escorted to the car before their time on the track.  An awesome sight. 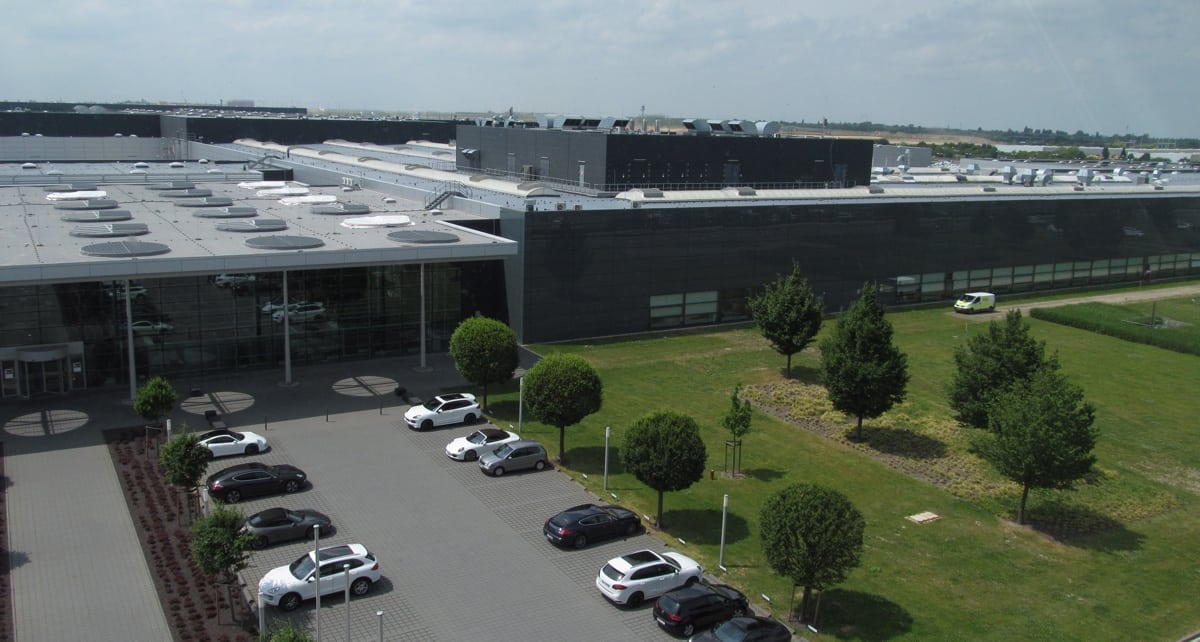 Entrance to the Porsche Leipzig Factory.

There were four others on our Factory Tour.  A couple from the Netherlands were there to pick up their new Cayenne and Ron and his son, Sam, from Fort Lauderdale, Florida, came to collect his new 911 Turbo GT.  The next day, Ron and Sam were setting out on a 10-day driving tour of Europe.  Ron recognized the PCA logo on my jacket and that broke the ice.  We were all over the moon to be there at Porsche.  Ron and Sam ended up riding shotgun for a few laps in that 918 Spyder.  I was green with envy.  The Dutch couple spent their free time pushing a Cayenne to its limits over the 18 special modules of the 6 km long the off-road circuit.  They returned totally blown away.  With our tour guide, Julie, we made our way over to the vehicle assembly building via the Integration Office area.  There were a few simple ground rules: Stay within the yellow lines and photography of any kind whatsoever, was strictly VERBOTTEN.

The tour lasted about 1½ hours and to say that it was impressive would be a massive understatement. Here are some details:

The workforce consists of approximately 3000 unionized employees – about 10% of which are women – working here on 3 shifts per day with no assembly work done on Sundays.  They have just completed a €500M expansion, the largest in company history, for fabrication and painting of the Macan product line.  About 650 vehicles – Cayenne, Panamera and Macan – are produced per day, consisting of over a million potential combinations of model, engine and option variants using JIT assembly techniques.

Each work station has a team of 12 people who rotate the actual work performed every 2 hours or so.  There are two staggered work breaks during each 7.6-hour shift.  The work stations are generally elevated; that is, the workers are by and large standing up as they work.  In some places the chassis moves on a wooden platform which glides along on a special conveyor flush with the regular floor.  Easier on the feet and there to minimize static build up.  It seemed to be a stress-free work en­vironment for the employees.  The only robotic station in the final assembly area that we toured was used to install the front and rear windshields – fascinating to watch in action.

The Cayenne and Panamera bodies are fabricated off site and brought to Leipzig by rail.  We did not see the Macan fabrication areas; however, in the future, public tours will include those parts of the factory.

The plant assembly areas are kept at slightly positive air pressure to keep foreign materials out as much as possible.  It was fun to see some of the office personnel as they moved through the plant on neat looking scooters – Porsche designed, no doubt.

The power train – engine, transmis­sion, drive shafts, brakes, suspension, etc., are assembled on driverless platforms that move slowly past the vari­ous work-stations floating along by magnetic induc­tion over a special track imbedded in the floor.  When completed, it moves to line up with the pre-assembled chassis which are suspended from an overhead track.  The two main assemblies are then “married” and secured by 50 machine tightened bolts.  Interestingly, eight of those bolts are finalized by hand. I guess there are still some things done better by feel.

Final assembly includes the steering wheel, air bags, fender liners and wheels and tires.  Once completed and topped up with all required fluids, every vehicle is started up and sent to the test track for an initial shake down run.

Skid pads and the new handling course under construction.

Speaking about the test track, almost as soon as we finished the Factory Tour, it was time for me to head out onto the track.  Leipzig has a Hermann Tilke designed, FIA certified track, which incorporates 10 famous curves from around the world, including the Lesmo Curve and Parabolica from Monza, the Suzuka S, and the Corkscrew from Laguna Seca.  My instruc­tor, Axel, came looking for me and after a few ques­tions about my previous track experience, we headed out.  He drove the first few laps and pointed out the various curves.  Then he said, “Let’s have some fun” as he turned off the PSM and drifted through the remain­ing corners before pit lane.  He was having a blast while I hung on for dear life!  Nice work if you can get it.

He double-checked my driving position and then it was out for a few laps with Axel in the passenger seat providing advice and encouragement.  Then we stopped again and he got into the 911 Turbo S “Safety Car” and led the way.  I followed as closely as possible on the racing line while in constant radio contact.

I was driving a new base Cayman (981), the closest equivalent to my car, with only slightly greater horse­power but fitted with PDK.  This was my first experi­ence with the latest Porsche automatic, and although I consider myself a traditionalist when it comes to transmissions, (all of our cars for the past 30 years have been manual) I have to say that I was extremely impressed with PDK.  Any previous automatic I have driven seemed to have a mind of its own, whereas the PDK seemed to be able to read my mind.  Incredible!  It allowed me to focus entirely on the track.  About halfway through the session, Axel asked me if I wanted to try the off-road circuit. No way!!  I was having too much intensive fun to stop and so we continued for an­other 15-20 minutes.  Then I felt that I was reaching my limit.  Some unforced errors occurred and I was losing focus at times.  At one point, there was an unfortunate fatality on the track.  A local bird decided to “J-fly” in front of me at just the wrong time.  Axel said it wasn’t the first, nor would it be the last.  It was time for me to come in. 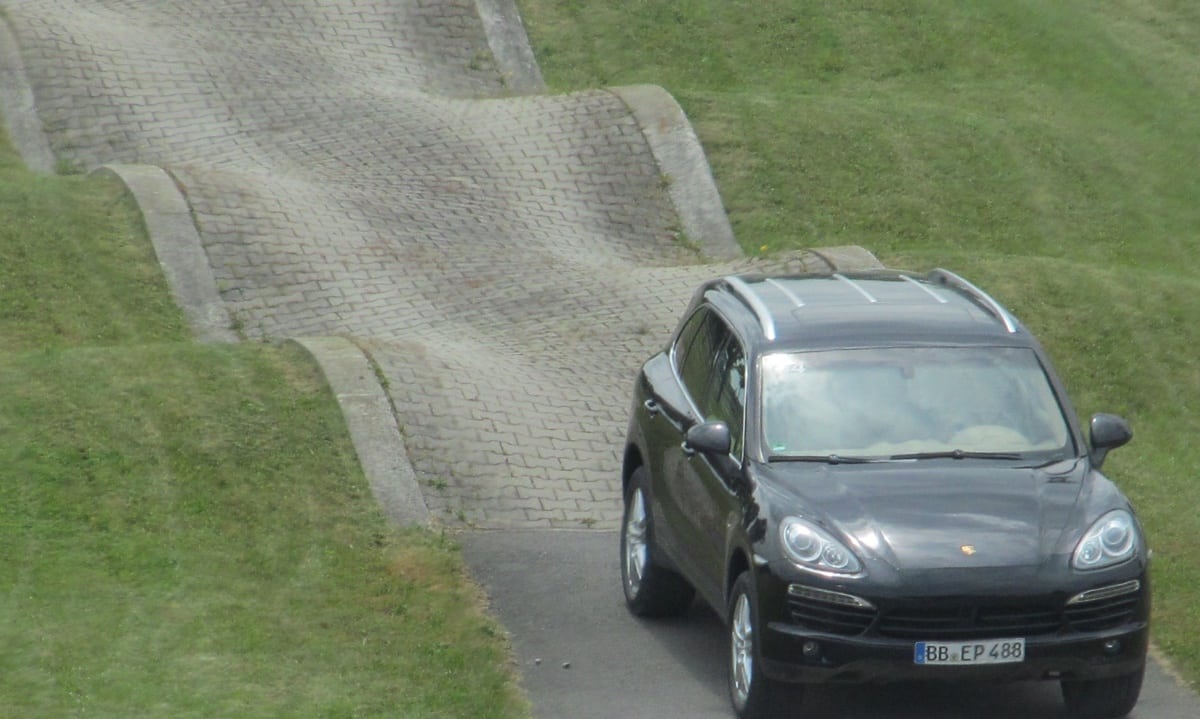 Wonky test road – I try to avoid such places.

Driving the track was awesome and I needed some time to come back to earth.  What better way than to enjoy a fabulous meal.  Axel lead us upstairs and I told him that he was probably a bit bored with me in tow however he was gracious and complimented my driving.  The three-course lunch presentation was amazing and the service was impeccable.  We sat near the windows overlooking the track and as we ate we watched the 918 Spyder turning laps – camera at the ready.  Afterward lunch we spent time admiring the historic car display, including two Carrera GT’s with and without body panels.

No visit to Porsche Leipzig would be complete with­out time in the Porsche Design Store.  Gosh, there was a lot of great stuff calling out to me.  Temptation was running rampant, but I managed to break free with just one pair of Porsche driving gloves (red, of course). 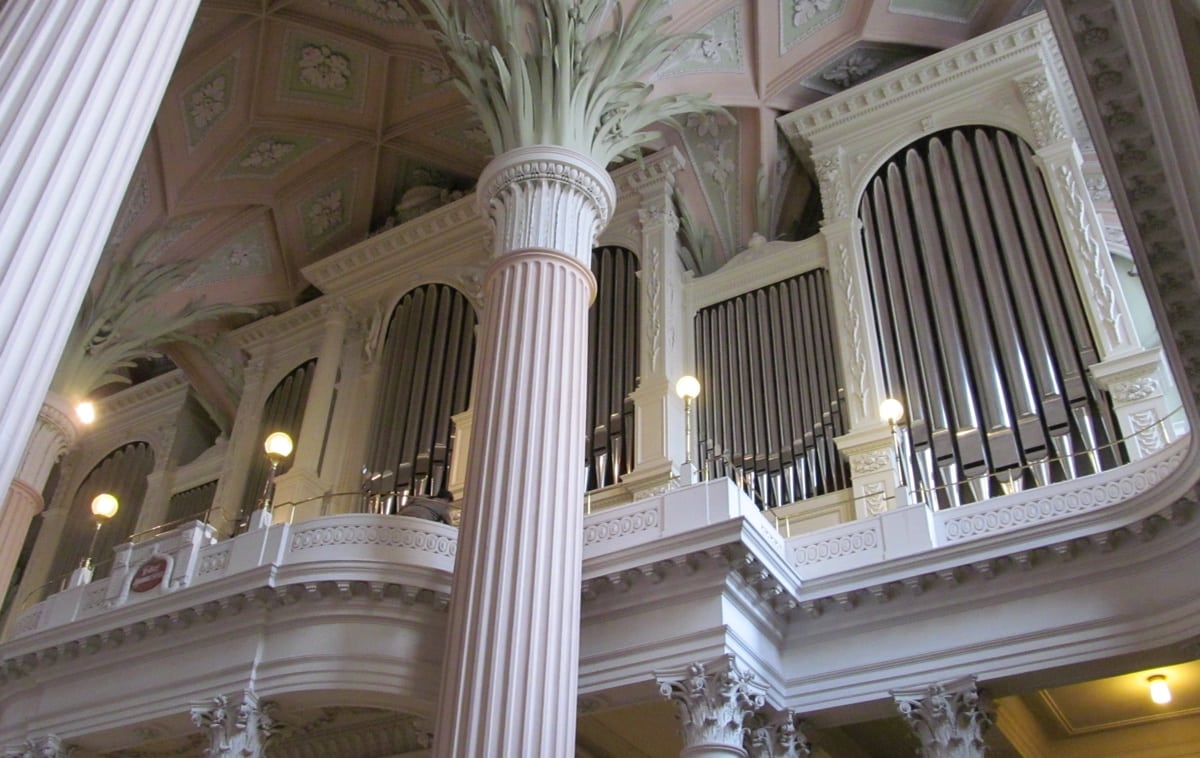 The restoration of Saxony’s largest church organ, in Leipzig’s St. Nicholas Church was made possible by generous support from Porsche.

That day, which started at Porsche Leipzig, ended at the St. Nicholas Church for a delightful concert of Bach’s music, followed by an after party featuring “imported” Bavarian beer, to celebrate another trium­phal performance by Tafelmusik.  The day was absolute perfection.

Life does not get any sweeter than this.  All we need do is to experience it ‘in the moment’ and to appreciate our great fortune.

Note: Porsche has produced a video, called “Porsche Leipzig. More emotions per hour”, which captures the spirit of our day at the facility.  It can be found at www. porsche-leipzig.com. All the details of how you can Discover Porsche Leipzig, along with their other pro­grams, are available at that site which contains a wealth of information and pictures.

Carrera GT’s with and without the body panels.