Home »Driving»Parade Virgins No More! Our first trip to Parade 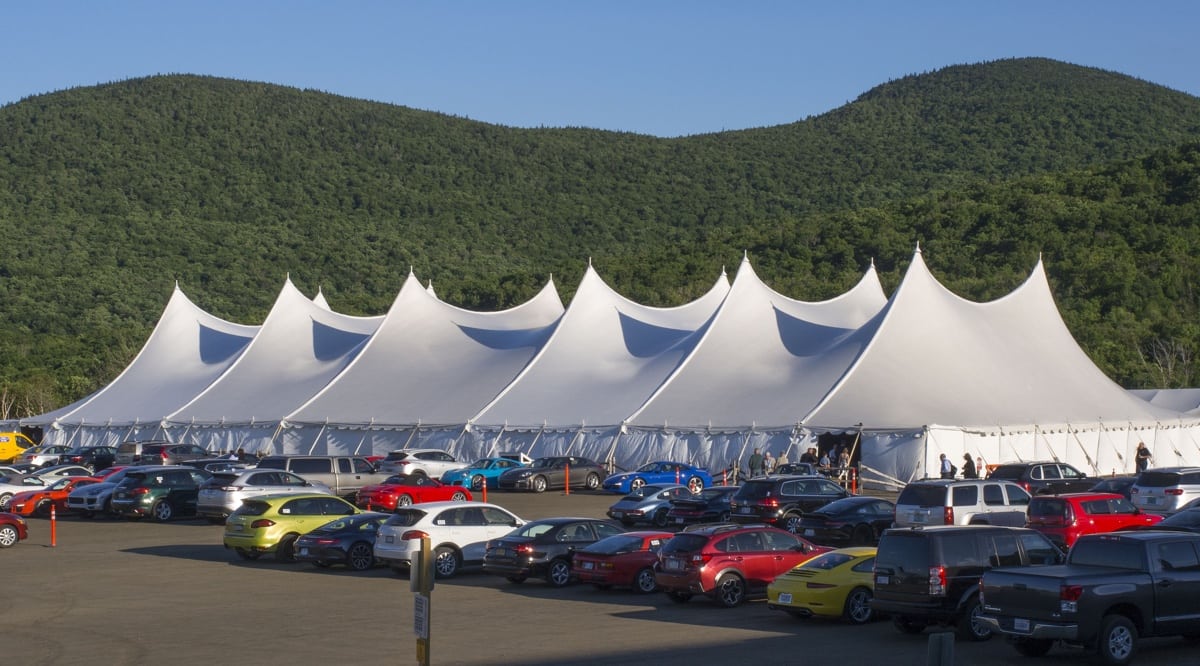 The Concours Banquet was held in the massive Parade Pavilion tent, outside the Stateside Hotel.

Story and photos by Graham Jardine (from Provinz August 2016, page 20) 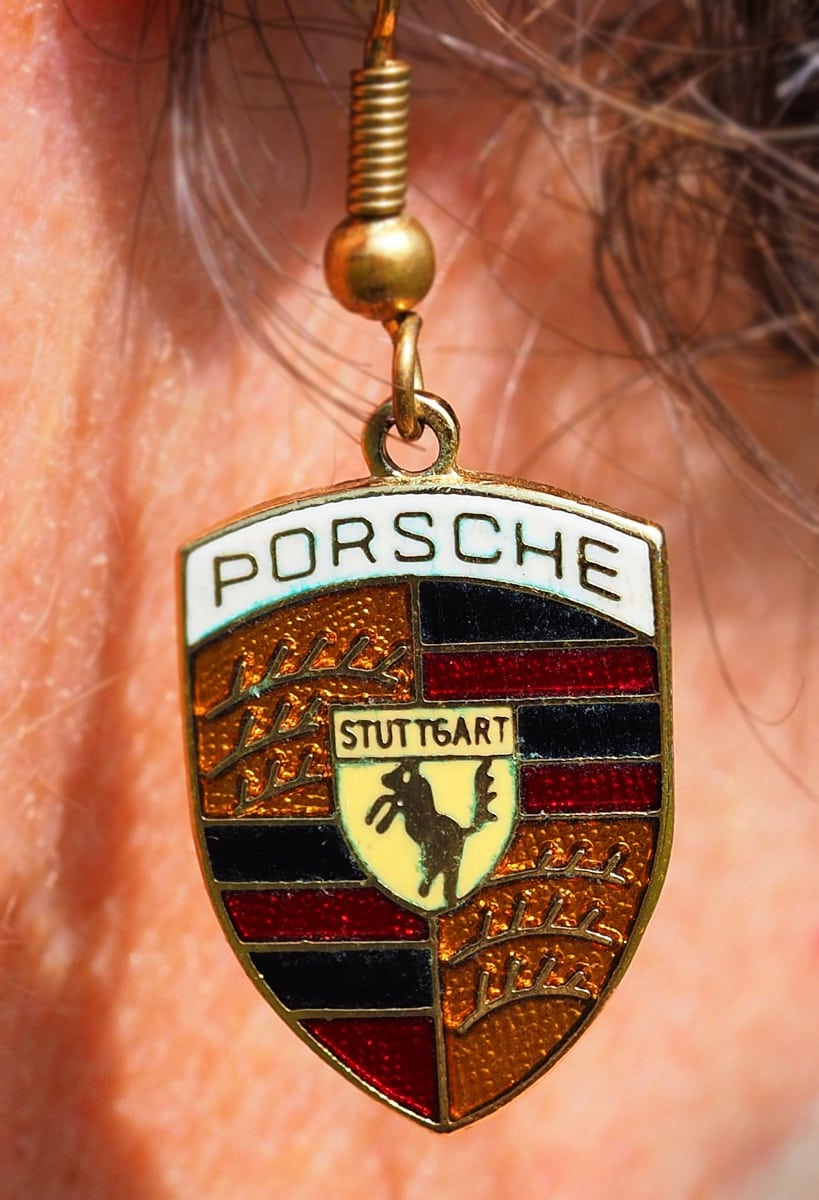 I’ve skied at Jay Peak since the mid-‘70s and been a member of PCA for 12 years, but having never gone to Parade, when my wife Margaret and I heard that it would be at our mountain this year, we just had to go.

First, we had to find a place to stay. I inquired about the resort’s three Clubhouse Suites—but alas, they were unavailable. We booked a one-bedroom condo through the accommodation lottery. Then one day, I was asked if I was still interested in a suite—apparently Hans-Peter Porsche was going to be tied up at Le Mans and wouldn’t need his, overlooking the golf course and Concours area. Interested? Uh, yeah!

Next was Registration, a process that was a bit daunting. I spent quite a bit of time reading up on the various activities and planning our schedule, so when Registration opened, I was ready. 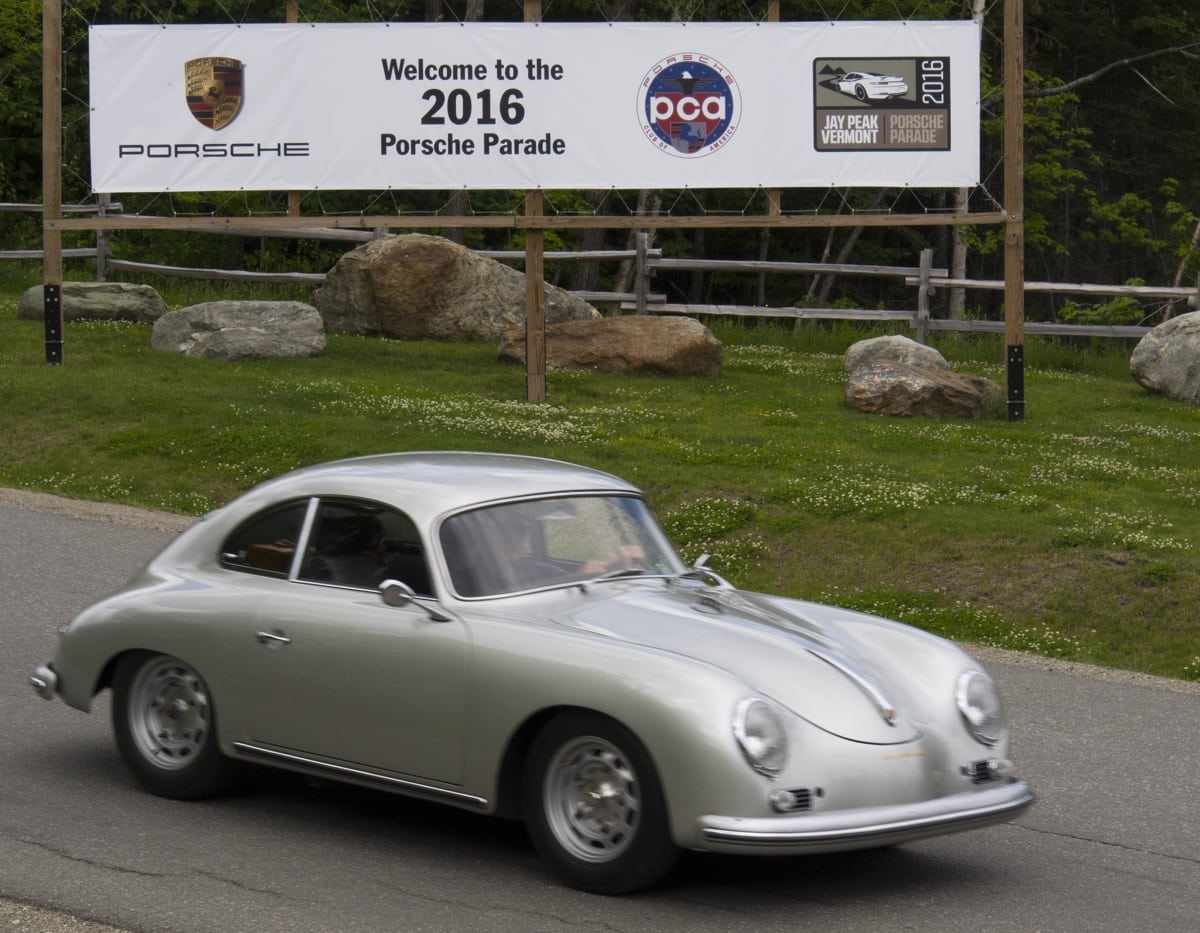 Parade week finally came and we arrived in Jay late Saturday afternoon to find the resort decorated in PCA Parade and Porsche flags and banners. We promptly hung our UCR flag on the balcony to make our Region’s presence known.

Sunday morning, we attended Parade 101—an orientation for first-time Parade goers—and then we were off to Registration at the Ice Haus, where we picked up event materials including our volunteer shirts. We stopped at the Parade Goodie store (tip: go early, popular items sell out quickly), and later made use of one of the three car wash stations—hoses, soap, buckets and cloths, all provided!  That evening, we attended the Pirelli Welcome Party buffet, spread across the patios and lawns of two entire hotels!

One of the first things you notice at Parade is the sense of community—everyone says hello to everyone else in passing, even though they’ve probably never met.

Monday at Parade is Concours day. After waking, we watched from our balcony as the cars made their way onto Fairways 1 & 9 in front of a bluebird sky. We began our rounds at the adjacent Historic Display—what a stunning collection of 356s, early 911s and other models, including three Rothmans-sponsored race cars! My favourite was a rally-prepared 959. Next to the Historics, Porsche displayed current models, including a new 911R.

Then it was on to the fairways, the field of dreams. Gorgeous, meticulously-prepared Porsches as far as the eye could see, arranged by model and year. We watched judges, identifiable by their white shirts, clipboards, and groundsheets (for under-car inspections) assess the cars—Provinz editor Randy Gananathan was judging the 356s! UCR past president Botho von Bose judged newer cars. As we made our way around the field, we also encountered several of the other UCR members present. It’s hard to imagine a more impressive single marque display of cars anywhere! 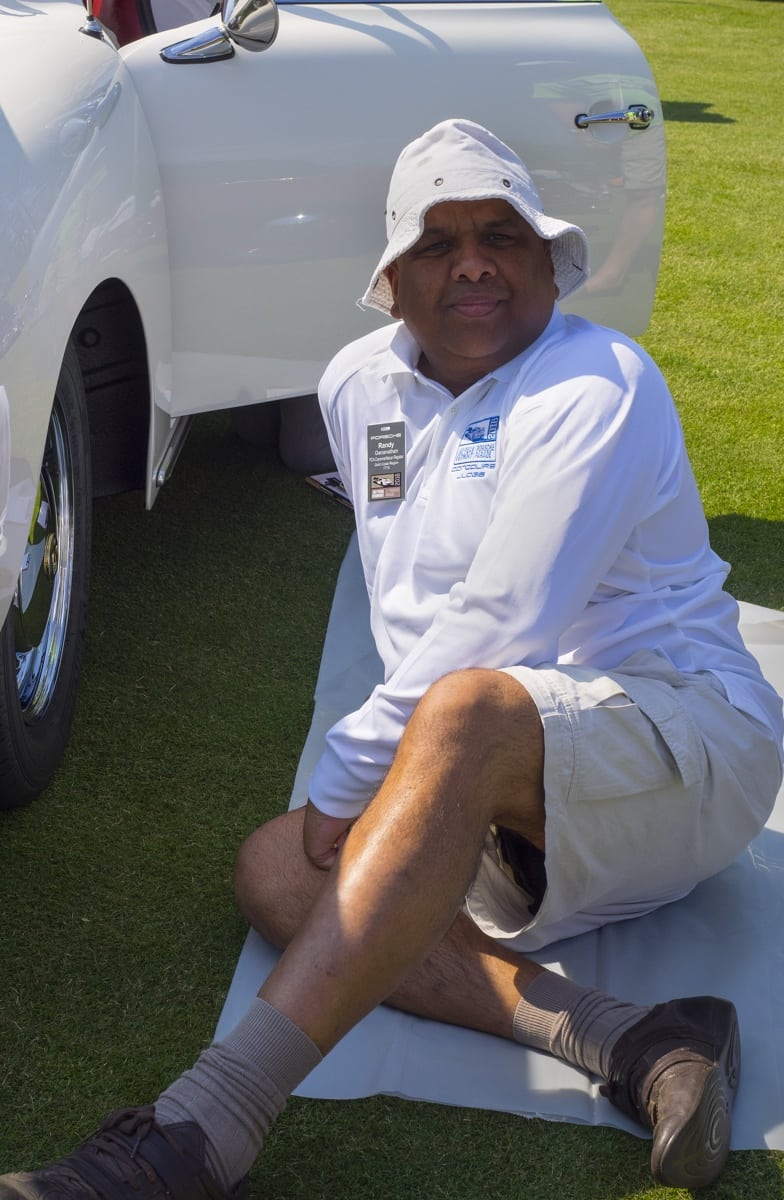 Although appearing to be picnicking, Provinz Editor Randy Gananathan was actually judging and working hard amongst the 356’s. 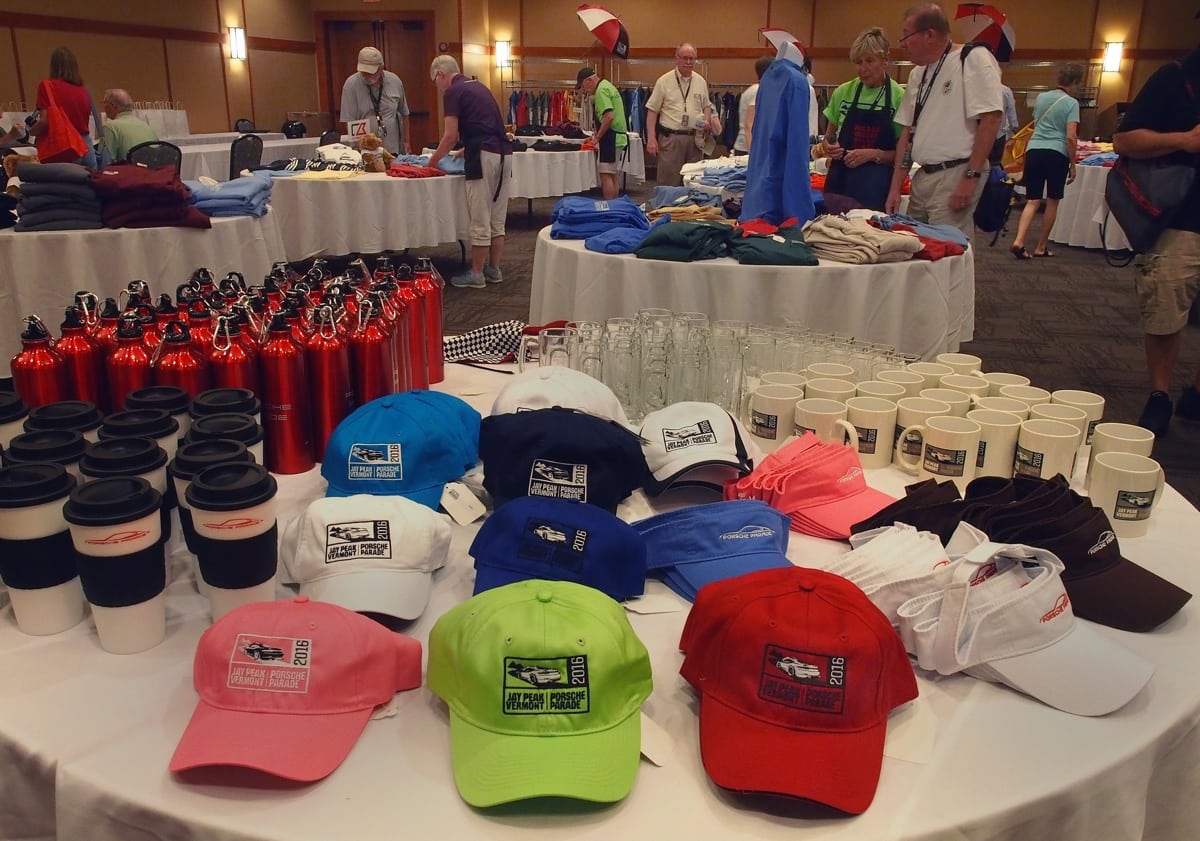 We made a stop at the Parade Goodie Store, which featured lots of PCA and Parade-specific merchandise

As in our own Region, PCA events don’t happen without volunteers. Parade is “Fuelled by Volunteers”. Our Monday afternoon volunteer assignment was to staff the Goodie store—I don’t think I’m cut out for a career in retail, but we did a respectable job of keeping the remaining stock neat and orderly. Tuesday, we manned a checkpoint in the Time, Speed, Distance (TSD) Rally— we logged participants’ time in, received a time slip from them and provided an “out-time slip” so they knew exactly when to begin the next leg. Our crew captain and a few others were experienced with the timing equipment and process and helped us learn the ropes.  Unfortunately, we watched a few teams zoom past our checkpoint without noticing the turn-in. We heard that some almost made it to Canada before realizing the error of their ways!

Tuesday evening’s Concours Banquet was a highlight of Parade. At one point, they had everyone stand, then sit down according to the number of Parades attended. If I remember correctly, the last standing had attended 52 Parades—astounding! UCR was honoured for PCA’s Greatest Actual Growth, and later in the week, Best Overall Website, Class V (for large Regions). I signed up for Wednesday morning’s Best Ball/Shotgun Start Golf Tournament. Unfortunately, this was the one-day with heavy rain! That afternoon, I participated in Michelin’s Drive & Compare event, driving two new 911s back to back—one equipped with matching Pilot Sport Cup tires all around and another with different tires on the rear—to illustrate how handling is compromised when you mix tire compounds front to rear.

Thursday was the Gimmick Rally—we were given a map with the location of 16 of Vermont’s fabled covered bridges and told to visit them, taking pictures of each to prove we had found them; the car accumulating the shortest mileage would be the winner. The route took us through the scenic Smugglers Notch mountain pass to the famous Trapp Family Lodge and the town of Stowe, with its interesting architecture. We only finished mid pack, which I’m sure was just a computational error after they converted our Canadian car’s kilometres into miles. We had the maximum fun possible though and saw some beautiful countryside.

We headed home early Friday, missing out on the Volunteers Lunch and the Victory Party, where additional awards were handed out and prizes drawn. But as perhaps you can tell, we had a great experience.

They say you will always remember your first—Parade, that is—and I’m sure that is true. We might not make it to Spokane, Washington for the 2017 Parade, but the next time one is within reasonable driving distance, we’ll be there!