With PCA Club Racing recently absorbing the independent 944 Cup racing series, a new light is shining on front-engined, four-cylinder Porsches—a category that enjoyed its first life from 1976 to 1995.

The first 924 hit US shores in 1976, as Porsche went after younger buyers—who often seemed to be the college-aged children of 911 owners! As the manufacturer tinkered, other front/four iterations included the 924 (and Turbo), 944 (and S, Turbo, Turbo S), 944 S2, and 968. A few 944s were specifically built for racing—including 31 factory-built in 1986 for the Rothmans Challenge Series in Canada, driven by the likes of Goodyear, Tracy, and Fellows.

Although you may see one of those remarkable purpose-built models in 944 Cup today, you don’t need one to go racing in 944 Cup. Dave Derecola’s original goal remains, some 14 years after he founded the series: take the various front-engined, four-cylinder Porsches, put them into Cup and Super Cup classes, and level the playing field in each class using weight restrictions.

In developing rules and running the series since 2002, Derecola’s emphasis has been on keeping drivers engaged and helping new drivers enter the fold. The series has flourished, even as the US economy has waxed and waned. With 944 Cup’s integration into PCA Club Racing, Dave, who is a PCA member from South Carolina, will retain his position as Series Director and join PCA’s Club Racing committee. And models that may have been relegated to near-extinction have been given a second life, certainly one more suited to Porsche’s racing bloodline.

The PCA-944 Cup relationship begin in 2006, when PCA created SP1 (Spec), SP2 (Cup), and SP3 (Super Cup). The two organizations ran joint events, with 944 Cup get­ting split starts if grids reached 15, a level the group regular­ly exceeded. By 2013, a record 60 entrants took to Watkins Glen, with 17 racers crossing the border from Canada; in 2014, the Midwest chapter joined 944 Cup, jump-starting series expansion at the Circuit of the Americas. 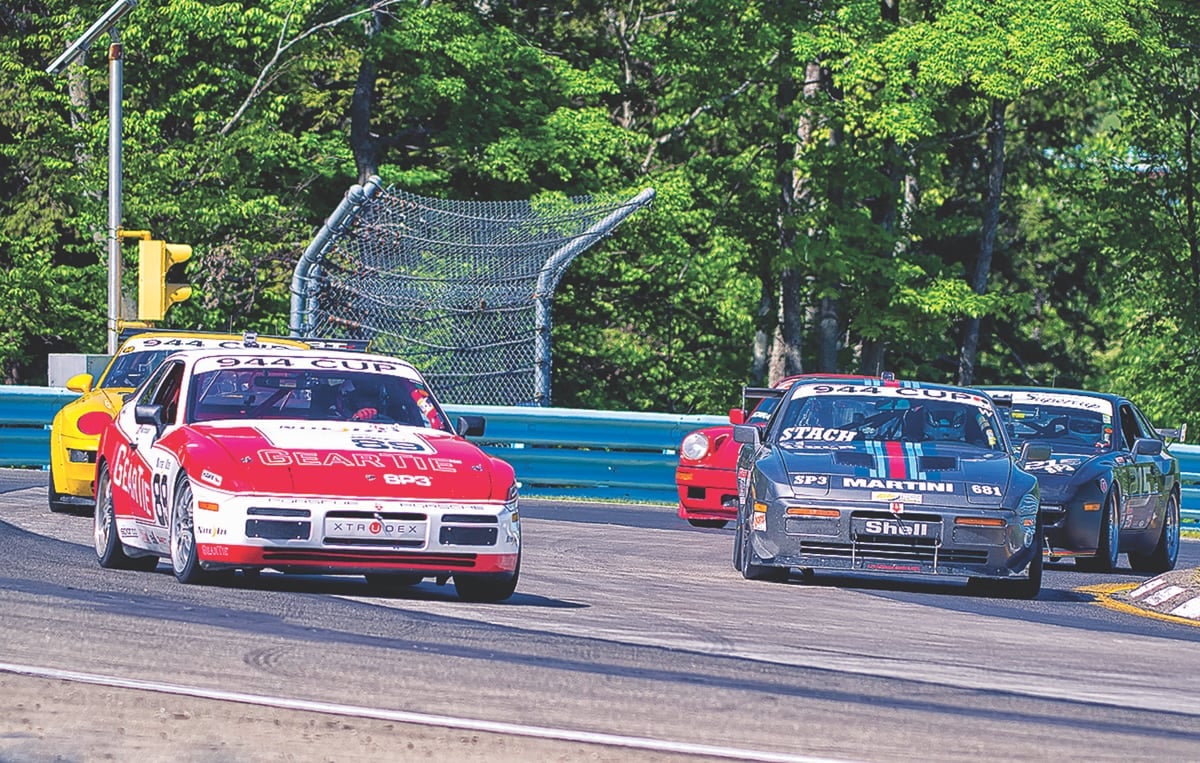 Sponsors have been generous: The most popular awards for 2015 were the bright-red bicycles given to National Champs Robbie Wilson (Cup) and Karl Poeltl (Super Cup) by the Pikesville Bike Shop in Maryland. Each winner was also given a year of entries in the Pirelli World Challenge.

Grassroots Motorsports (http://grassrootsmotorsports. com/articles/porsche-944-profile/) remarked in 2000 that a water-cooled Porsche could be purchased for the price of “a used Honda,” and the car continues today to appear on the budget-racer’s list. Over 130,000 of these Porsches were originally sold in the United States (see http://www.connact.com/~kgross/ FAQ/944faq03.html). Of those, just over 56,000 were 944s, sold from 1983 to 1989. The largest production year was 1984, followed by 1986. Un­like other cars of that period, owners kept their 944s drivable, so not only is the model available but a network of parts suppliers (used/refurbished, after-market, OEM) exists to support the amateur 944 racer.

Recently, Super Cup has grown, with grids at the 2015 championship equaling those in Cup.  Derecola says that in order to keep costs down for Super Cup/SP3, “We kept in place the basic concept that you get to run a stock engine.” With eBay and other online sources for finding cars and parts, this class has proven to be quite attain­able, though drivers must be savvy about the cross-pollination of parts from later Porsches.

No matter the steed chosen, many 944-related suppliers race in, crew for a driver, or support the series—so technical support is readily available. In this series, the competition is tight, but the camarade­rie never wanes. And there’s always room for one more driver!

A Visit to the Porsche Experience Center