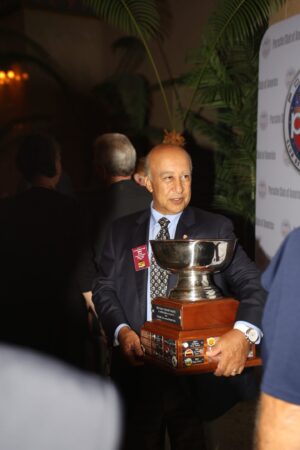 Upper Canada Region continued in its winning ways at the 2015 Parade in French Lick, IN. This is the third time that UCR has been recognized as Region of the Year. If PCA is still using the same big trophy (after 60 years) there are two small Canadian flags adorning the annual trophy plaques.

Amongst Parade Concours d’Elegance results, we have Oliver Collins placing third in reservation Class with his 1995 911 C2.

Winning score in the Parade Rally was 57. For the overall winner, 40 demerits were on the first leg, clearly a problem for many participants. UCR member’s scores:
• Peter and Beth Oakes 312
• Rob and Debbie Pogue 325
• Rosey and Bruce Koivisto 409
• Sencer and Julide Erkaya 456
• Kevin Kenney and Michael Cowger 525
• Clive and Eunice Van Wert 812
• Edward Youngs and Mary Ellen Duncan 844

Rennsport will be at Tremblant September 21-22, just after the UCR weekend at Mosport. This is a popular event and has been a sellout in past years, even for instructors. Don’t forget that Rennsport has a cancellation fee of $100 should you decide to drop out. The Tremblant condo reservation service also has a cancellation fee. In the past, some have departed Mosport and headed directly to Mont Tremblant. If you want to extend the season to November, you can get to Virginia International Raceway. It’s 1,100 km but a great track by all reports.

Congratulations to all that had a hand in making UCR the largest and best Region in PCA.