and the 911 Targa 4 GTS with all-wheel drive. The 3.0-liter flat-six cylinder with larger turbochargers delivers 450 horsepower, which is 30 horsepower more than the current 911 Carrera S and 20 horsepower above the previous, naturally-aspirated GTS model. All GTS variants are equipped as standard with a seven-speed manual transmission. The seven-speed Porsche Doppelkupplung (PDK) dual-clutch transmission is available as an option.

More power, even greater performance 405 lb.-ft. of torque (37 lb-ft. more than the Carrera S) further improves acceleration and responsiveness. Maximum torque is available between 2150 and 5000 rpm. Porsche Active Suspension Management (PASM) is included as standard on all GTS models. The GTS Coupés feature the PASM Sport Suspension, which drops the ride height by 0.39 inches (10 millimeters) compared to the PASM suspension, which is standard on all 911 models including the Cabriolet and Targa variants of the GTS. The 911 GTS Coupé models accelerate from 0 to 60 miles per hour 0.2 seconds faster than the respective Carrera S and 4S Coupés. When equipped with the optional PDK (Porsche Doppelkupplung) transmission, the Carrera 4 GTS Coupé takes just 3.4 seconds to reach 60 miles per hour. The GTS Cabriolet and Targa models reach 60 mph 0.3 seconds faster than the comparable Carrera S/4S Cabriolet or Targa 4S models. Top track speed of the GTS models is up to 3 mph higher, depending on the variant. The 911 GTS Coupé with manual transmission and rear-wheel drive is capable of 193 mph.

Typically GTS: Black elements accentuate the high-performance character The GTS models distinguish themselves within the 911 model line not only in terms of technology, but also in their design: All GTS variants are based on the Carrera 4/4S body, which measures 72.9 inches (1852 mm), even on the rear-wheel-drive models. The new Sport Design front end with a spoiler lip painted in black emphasizes the high-performance character. Combined with an increased rear spoiler extension height, it reduces lift on the front and rear axle compared to the Carrera S models. 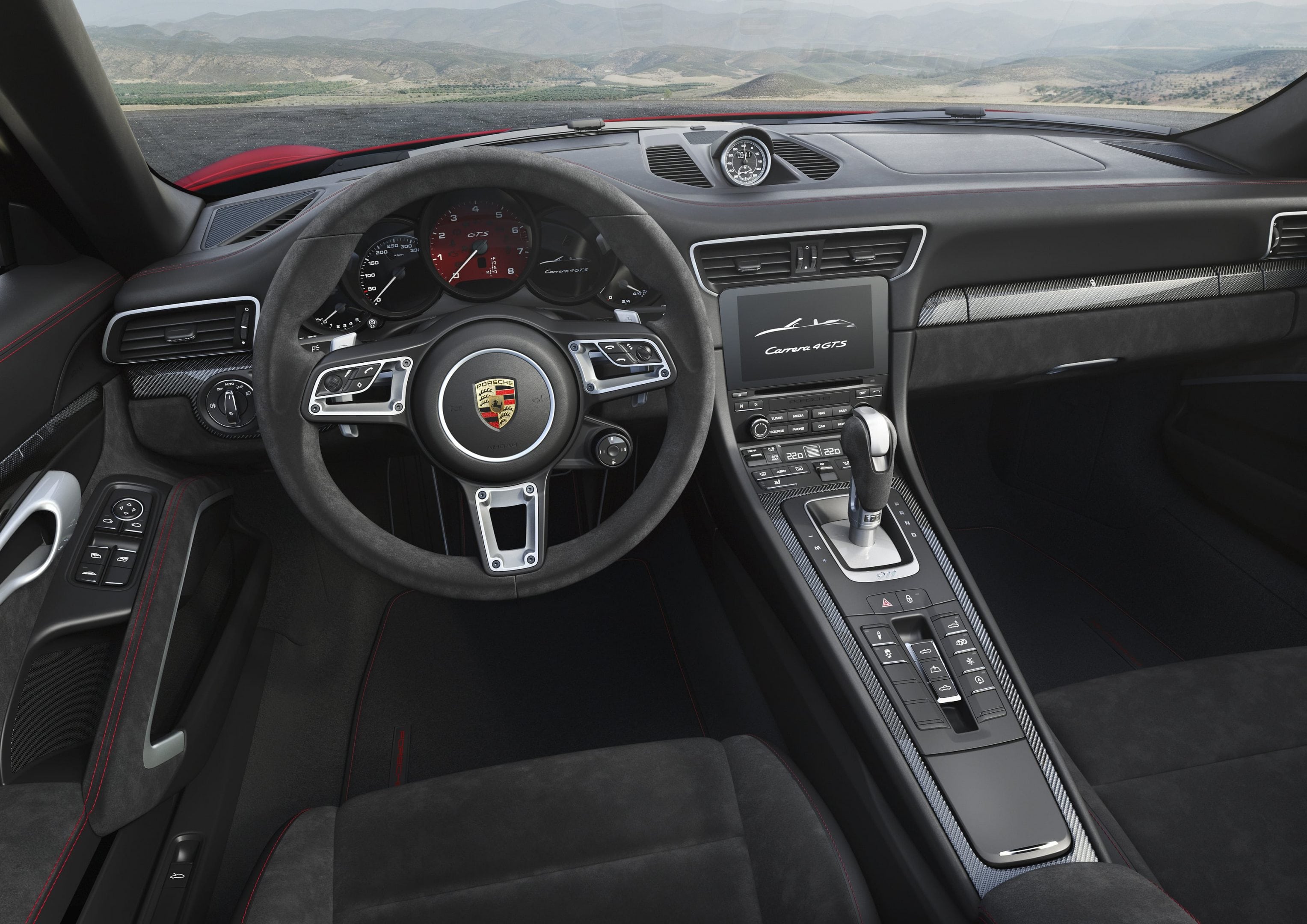 Tinted tail lights, rear lid grill strips with a satin black finish and tailpipes in high-gloss black, which are part of the standard Sport Exhaust system, give the GTS a particularly striking appearance. A new black trim strip between the tail lights is featured on the rear-wheel-drive variants. A light strip between the tail lights is reserved for the all-wheel-drive models. Sport Design exterior mirrors, 20-inch center lock wheels painted in satin black, and black GTS logos on the doors represent further visual enhancements.

The characteristic Targa bar, which is black with a satin finish for the first time, also gives the 911 Targa 4 GTS a very distinctive look.

The GTS offers a unique interior. The stopwatch of the standard Sport Chrono Package is integrated as a central component of the dashboard. The included Porsche Track Precision App has been further enhanced for the market launch of the GTS models. Its features include automatic recording as well as a detailed display and analysis of driving data for smartphones. Standard Sport Seats Plus with GTS logos on the headrests provide increased lateral support and comfort. They are fitted with a combination of leather and Alcantara® that is highlighted with a new seat stitching. Alcantara® can also be found on the standard GT Sport steering wheel, the gear lever and the armrest. The brushed aluminum interior trim is anodized with a black finish. 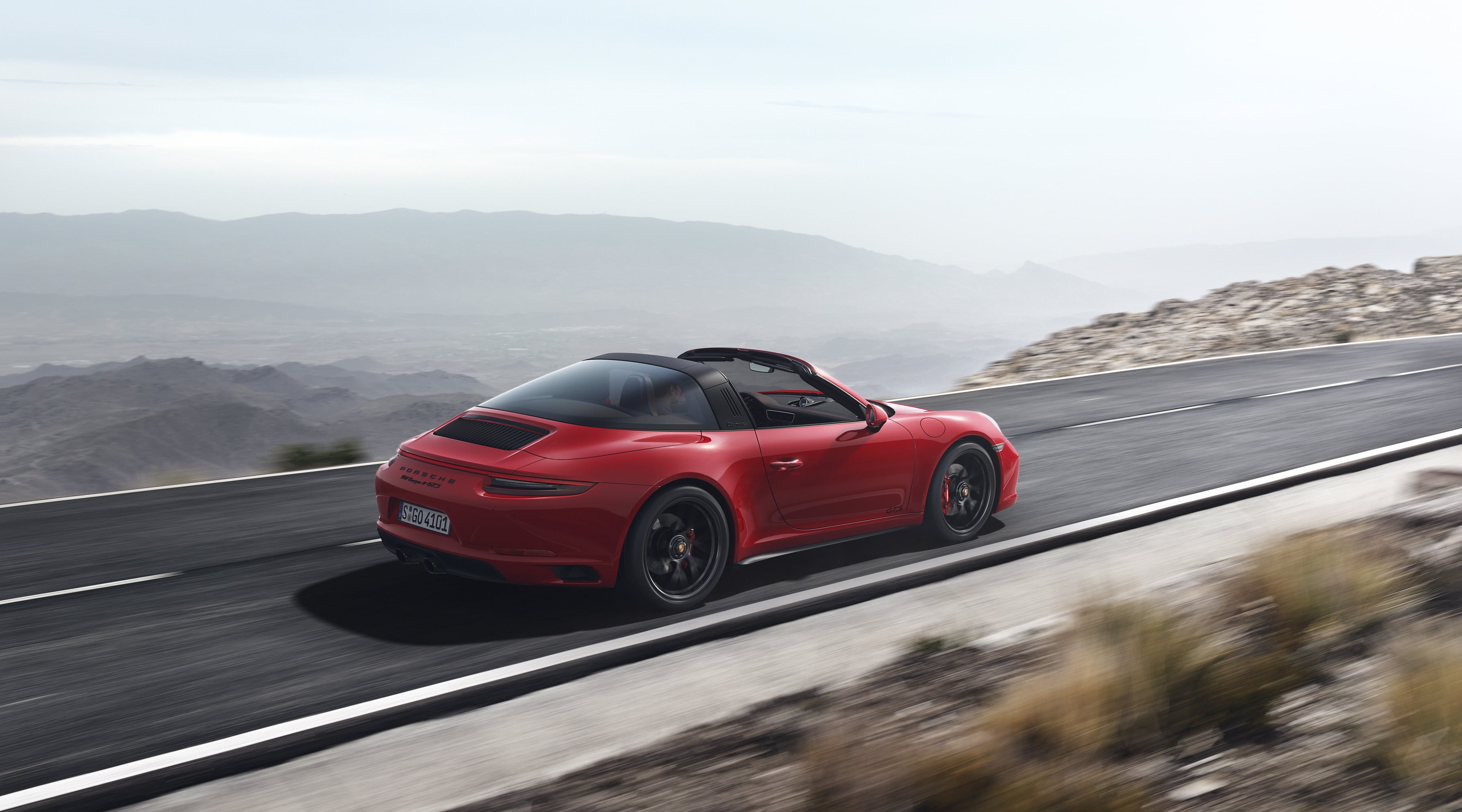 Previous articleUCR HOLIDAY SOCIAL
Next articleTHE PORSCHEPHILE: Rob McLeese’s 1971 911 has an interesting past