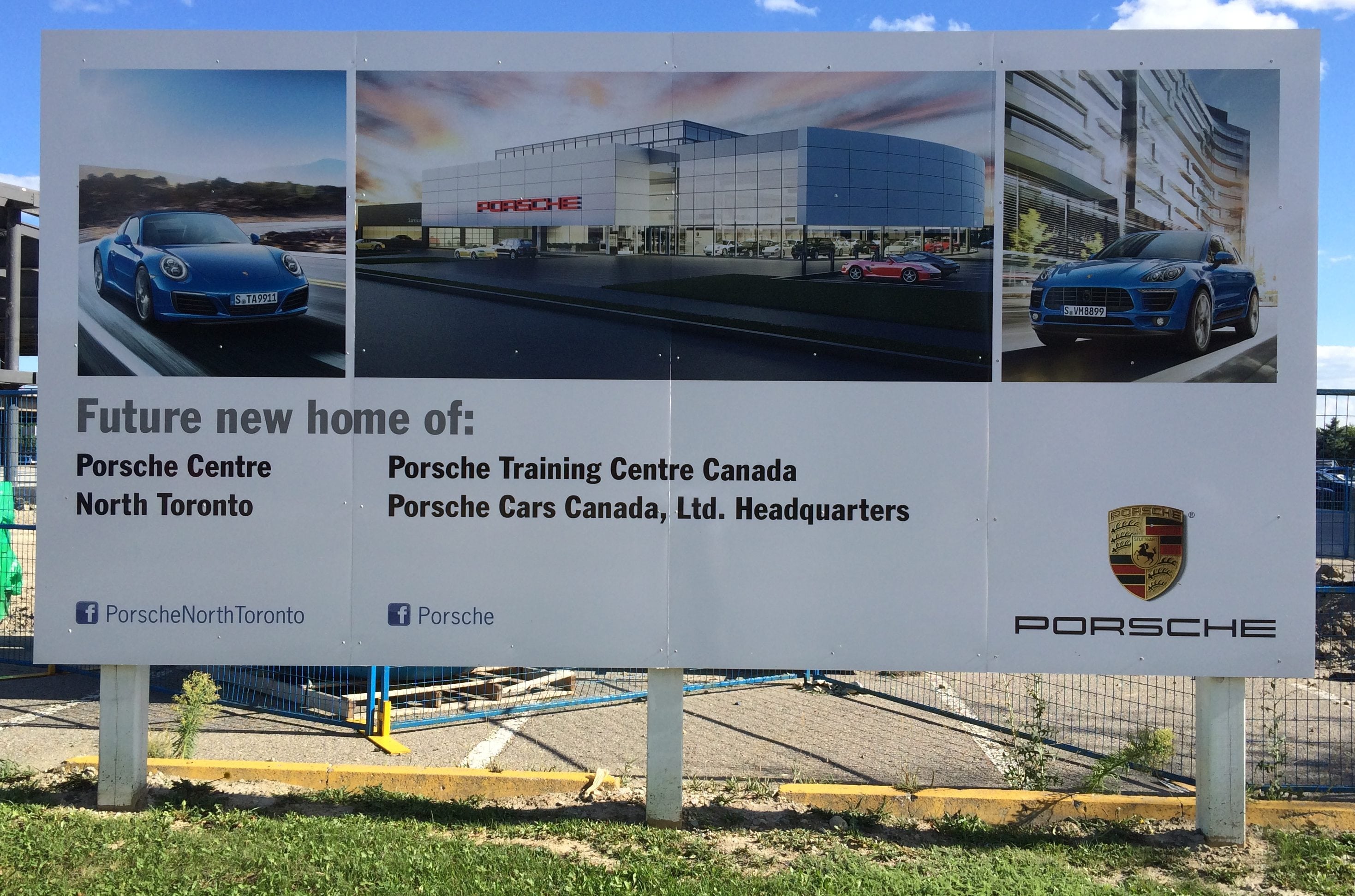 I had the privilege of meeting the start-up team recently at their temporary location in an office building next to the dealership construction site at 165 Yorkland Road.

John Cappella is the Managing Director of Porsche Centre North Toronto—PCNT. He left his position as Director of Network Development at Porsche Cars Canada Ltd., where he was the person responsible for dealership planning and development across Canada, to start up this new venture on March 1st, 2016. He walked into an empty temporary office with just the carpeting on the floor and began the process of setting up the entire dealership from buying desks to dealing with all of the construction elements to hiring the team.

His first hire was Dilreet Kaur-Kurl, Controller, responsible for the financial operations and his second hire was Shereena Robinson, Human Resources Manager. This team of three began the process of defining the structure of the dealership within the definitions of the Porsche network requirements and began implementation of the plan to now be able to open the doors to the Greater Toronto Area’s 4th Porsche Centre.

This new dealership follows the iconic design of all Porsche Centre’s worldwide that are immediately identified even if the logo isn’t quickly visible when driving past. Its Porsche identity is made up of just one word and the badge. It will be clearly visible to the millions of travelers crossing the intersection of highways 401 and 404 from all directions to make the bold statement that Porsche is here for all drivers in the GTA.

The showroom’s design concept focuses on the car. The key design element being 2.4 meter high glass panels of the showroom sweeping around the building in an arc similar to the curves of the road the cars are designed to be enjoyed on. Even at night, the brilliantly lit Porsches parked inside are clearly visible through these glass panels to passersby, providing eye candy in their various colour finishes.

Daytime visitors will be able to examine colours and finishes in full colour rendering due to brand new design elements being incorporated into this showroom. Careful placement allows more natural light through a wider glass entrance and a skylight that’s full length, bringing the outdoors inside, showcasing all displayed cars in a greener sunlit ambiance.

The entire showroom experience is structured to give visitors a complete immersion of the full model line-up without the clutter of sales desks or offices. It is designed to be warmly welcoming to everyone that enters the showroom to be greeted by the reception team and assisted by the extended team around them. The goal being to make every customer relax, enjoy the shopping experience and be fully informed of every technical to meticulous design and creature comfort feature built into Porsche products. So much goes into the careful design of a Porsche that almost “anything found in a Porsche is there for a reason” said John, “either for performance, safety or pure enjoyment. With Porsche, form follows function. The same holds true for the Porsche Centre North Toronto facility.”

Matthew Tam, Sales Manager. Fascinated with cars at a very young age, Matthew began his automotive career in late 1998 and soon reached the spot of being one of Canada’s top three salespersons with Acura. He started in sales at Toyota, moved to Acura, then to Infiniti where he worked for 12-years and ranked #1 Grand Master, the most coveted status there, before going to BMW in 2012 for four years and finally joining Porsche Centre North Toronto in October 2016. Born and raised in Toronto, Matthew speaks Cantonese and English. Matthew married his high school sweetheart whom he sold a Toyota to in his first job, within two months in the car industry. Matthew and his wife have a six year old daughter and four year old son. Matthew’s stated goal is to ensure that every customer leaves completely satisfied with their purchase experience at Porsche Centre North Toronto to the point of being able to share their positive feedback with family and friends or even via social media. An experience he aims for his team to provide that is more akin to a Ritz Carlton or Four Seasons immersion than what competitors in the automotive industry aspire to. Being a highly technical “car guy” with some racing under his belt, Matthew is looking forward to building strong relationships with his clients. Plus he enjoys talking about cars with everyone he meets. A true car guy to the core!

Jerry Liu, Sales Executive joined Porsche Centre North Toronto just days before I interviewed him in February 2017. Jerry has been with a BMW dealership in Kitchener/Waterloo Region since 2011 and has always been a car guy from his childhood. He came from Mainland China on his own to attend college in Canada and always dreamt of joining the automotive industry, long before he came to Canada. Upon completion of his degree in York University, there was no question in his mind about what he wanted to do, so he applied to automotive dealerships and joined BMW where he was one of their top sales team members prior to moving up to Porsche Centre North Toronto.

Steve Breley, Parts Manager began his career as the lot guy and detailer at an Acura dealership in 1992. Within the same dealer group, he worked for Honda and Nissan progressing to parts counter, tower operator, occasional service advisor and eventually parts manager. Steve joined a BMW dealership as parts manager in 2005, he then moved to Landrover/Jaguar, until returning to BMW in 2012. Steve joined Porsche Centre North Toronto in late 2016 and brings the experience of working with the inside service teams as well as independent workshops to provide excellent parts support to all Porsche customers.

Joe Nash, Service Manager joined a small Volvo dealership in 1992 as parts delivery driver and lot guy and worked his way up to the role of Parts Manager. He then moved to a Volvo dealer that was part of a large Toronto dealer group, he worked at various European luxury brands within the group as a Parts Manager, Fixed Operations Manager, and Service Manager, most recently at that group’s Volvo and Audi divisions before joining Porsche Centre North Toronto in December 2016. Joe is keen to build a service team whose total years of experience will amp the credibility of the workshop to be able to handle every Porsche from the earliest to the newest car that comes in for repairs.

Adriano Bernaudo, Marketing Specialist joined a VW dealership in 2007 as a Sales Team Assistant while completing his post-secondary education. Upon completing his Bachelor of Commerce Degree in Marketing Management at Ryerson University he continued to pursue his passion in the automotive industry by joining a leading leasing group in the GTA in 2012. Adriano then moved into a marketing specialist position and progressed up into the world of corporate automotive marketing with Mercedes-Benz Canada as an Interactive Marketing Specialist in 2015. Adriano joined the startup team at Porsche Centre North Toronto in October 2016 and is responsible for all of the marketing efforts of the dealership from events to social media to advertising.

Previous articleTHE COLLIER COLLECTION REVS IT UP
Next articleTHE CANADIAN INTERNATIONAL AUTO SHOW: A photographic look at all things Porsche at the auto show