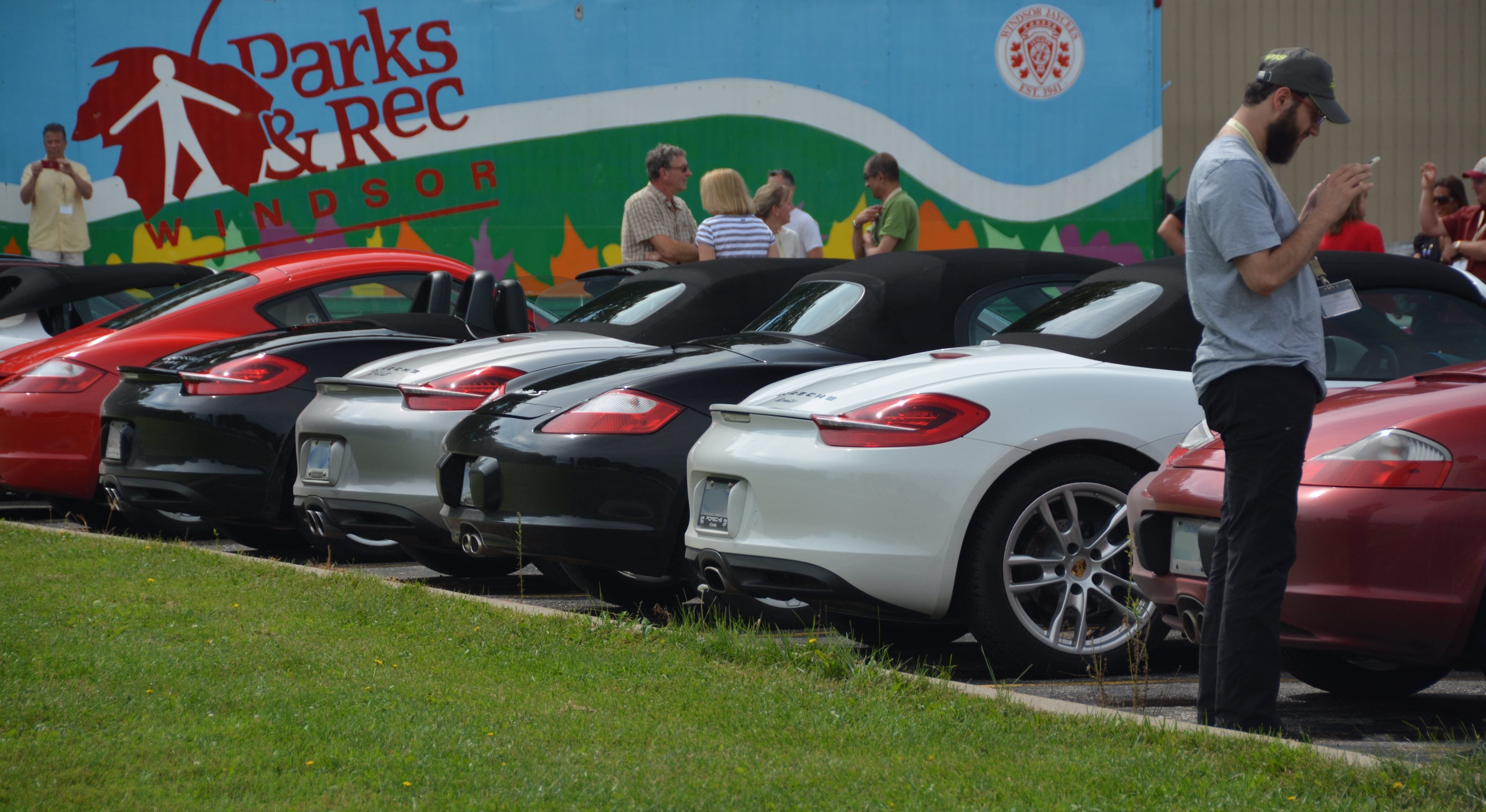 It was a dark and stormy morning. The top of my Boxster was up, which is a rare occurrence since some of a roadster’s magic spins from driving it topless. We rendezvoused with two other Boxsters, also headed from KW to the Porsche of London Fun Run. Thanks to Mother Nature, our Boxsters received their second car wash in two days as we shunpiked our way to the start point. Not wanting to toot my own horn, but I think my wash job turned out better than Mother Nature’s.

An hour later, we arrived at Porsche of London where we received a cheery greeting by the organizers and were directed into our group’s starting position. Inside, the welcoming staff had donuts and hot coffee waiting for us. While enjoying our treats, we took care of sign­ing the obligatory forms, catching up with old friends and getting our driving instructions from Mike Salter, organizer of this Fun Run. Outside, the rain had almost stopped. It was a good sign.

9:45 AM. It was time for group B, led by Paul Procu­nier, to start our engines. Even after 10 years of Porsche ownership, I still get that exciting tingle up and down my spine when I twist that key with my left hand and the Flat Six barks to life. Off in the distance, I spotted a patch of blue sky. Things were definitely looking up. Michelle had our easy to follow route instructions ready as I engaged the Sports Exhaust, flicked the shifter into 1st, let out the clutch and followed the group out onto the road. We wound our way through some London traffic and continued out to some side roads. After about 100 km of driving by picturesque farms and through small towns, each with its own unique character and the sun drying up the roads, a red light provided me the 9 seconds I needed to drop the CURVEN8R’s top. The day just kept getting better! 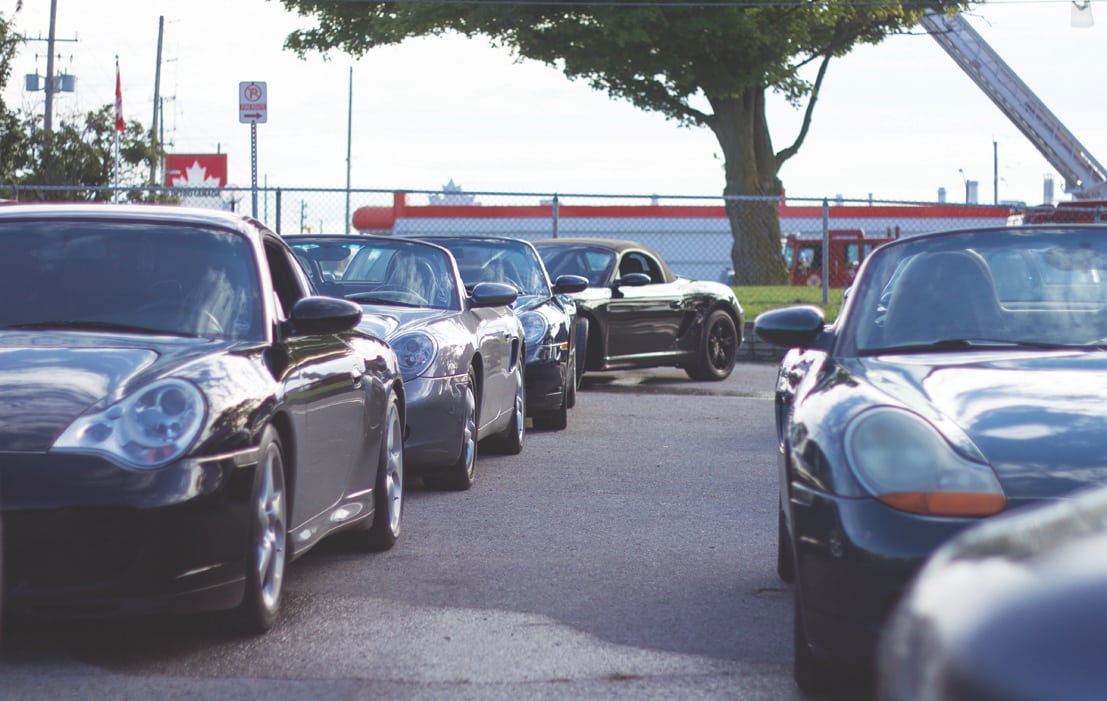 Shortly after, we arrived at our pit stop, a Tim’s in Ridgetown. It seems Tim’s is an integral part of most fun runs. How could we have a pit stop without them? Group A, led by Chris Watson had arrived shortly before us and were already enjoying what the Tim’s had to of­fer. It also gave us a bit of time to chat with other Porsche drivers and take a few pictures. Shortly before we were ready to head out on the second leg of our run, Group C, led by Aaron Greenberg came rumbling in for their pit stop.

A few minutes later, we were off again. Dry roads, sun shining above us and with tops down, we were able to fully enjoy the sound of those Flat Sixes. On this leg, on some open road starts, Paul was able to have some enthusiastic starts. We were able to revel in the sound of the Symphony in Flat Six as it quickly built to that fabulous crescendo, a rapid snick, snick shift into second and the sound quickly builds again. Is it any wonder that I never listen to that “other” stereo thingy in the dash while driving the Boxster?

It seems that the next 100 km went by much too quickly. Time really does fly when you’re having fun! We had already arrived at our destination, The Cana­dian Transportation Museum in Kingsville where we had parking reserved just for our Fun Run group. Again, there was time to talk to other participants, compare notes and take pictures. 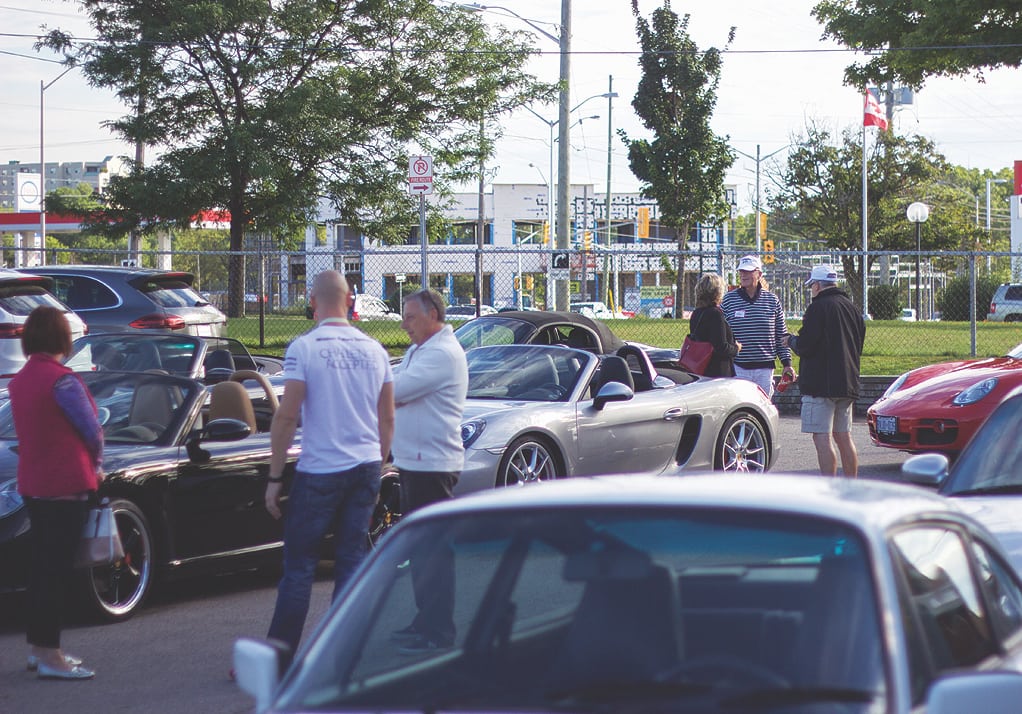 Then we entered the Museum where, in true 50’s style, we enjoyed hotdogs, burgers and fries for lunch before we took part in the group tours of the cars which ranged from a Canadian built 1893 Shamrock to a solar powered car built by students at the University of Waterloo. Included too, were horse drawn vehicles and motorcycles. There were many interesting things for car and history buffs to see. It’s a great place to visit if you’re ever in the Kingsville area.

Thanks again to Mike Salter of Porsche of London for planning and organizing another great Porsche driving event.

P.S. Even though it felt a bit disappointing that this event was over, I was cheered by the prospect that I was going to be able to drive my Boxster on the short 300 km drive back home. Topless of course! Life is good.