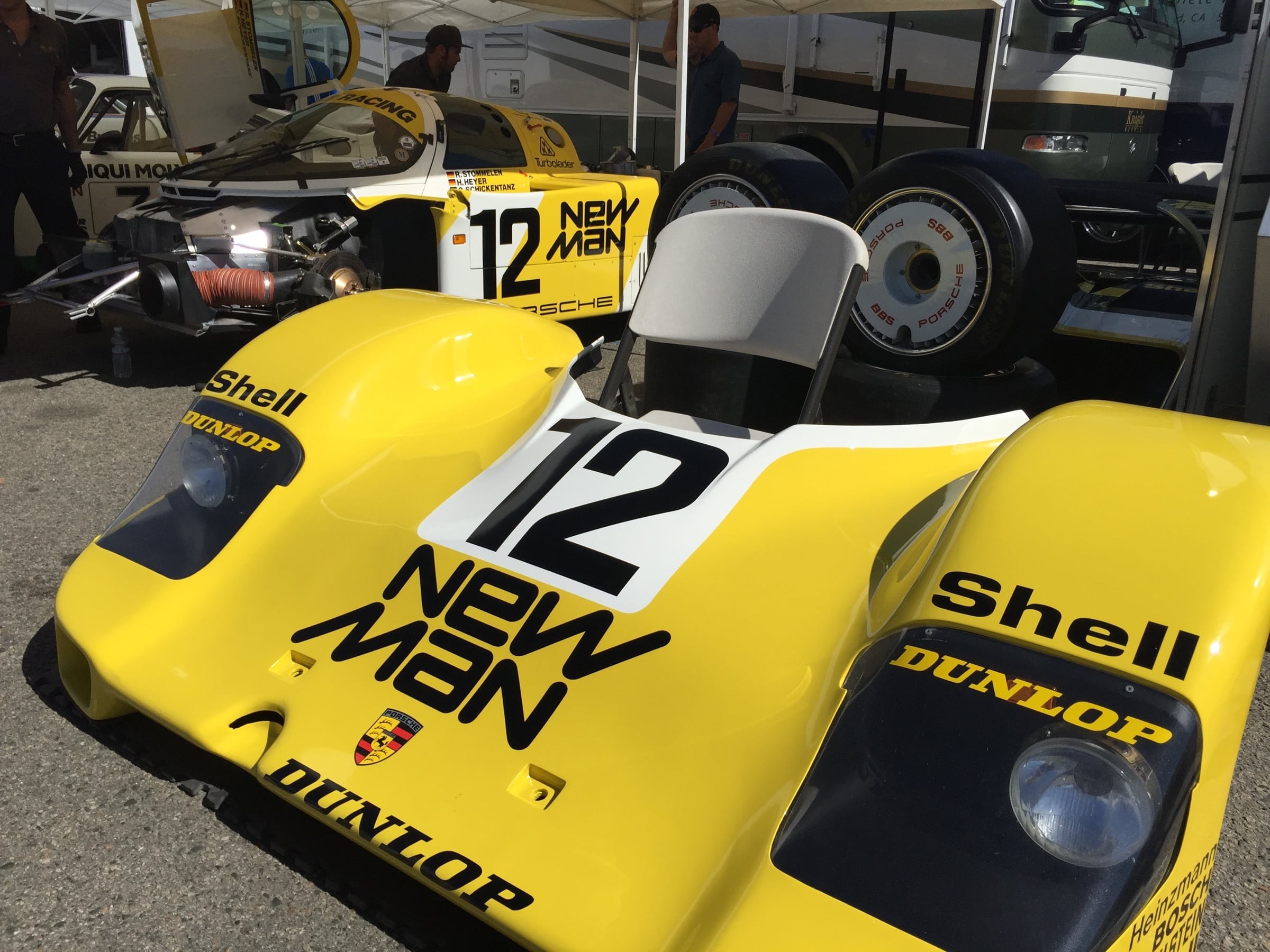 Canadian connections kept coming to the surface, nuggets of gold sparkling among the riches of Rennsport Reunion.

Unforgettable, for any lifelong Canuck fan of racing and Porsche.

First example, a casual conversation at the farewell function with Alwin Springer, feted at Rennsport as a legend, revealing how he actually discovered racing while working as a technician with Volkswagen Can­ada, between 1965 and 1968. Springer was co-founder of ANDIAL and first president of Porsche Motorsport North America, 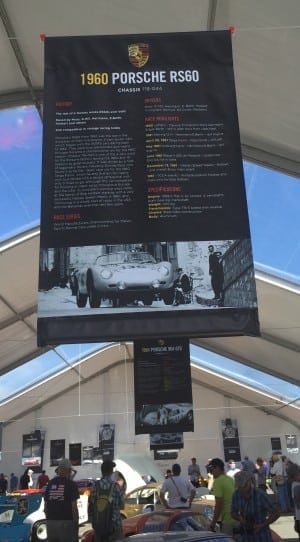 “Really, it was Rudy Bartling who got me into motorsport,” the 72-year-old Springer said, “helping Rudy when he was racing a Porsche RS60. That was my start.”

Bartling, of course, became a legend in his own right among Upper Canada Region members, as a mechanic without equal and a member of the Cana­dian Motorsport Hall of Fame. Former Provinz editor Kye Wankum championed Bartling’s nomination to the hall.

Few know, however, that Springer and fellow ANDIAL founders Dieter Inzenhofer and the late Arnold Wagner worked in Toronto, long before moving to California and founding ANDIAL, whose Porsches won the 24 Hours of Daytona eight times in the 1990’s. In 1987, the top five finishers all were ANDIAL Porsches.

The only Canadian among the legends invited by Porsche, Kees Nierop, of Kelowna, B.C., won the 12 Hours of Sebring co-driving a 934.5 in 1983. Ontario race fans will remember Nierop capturing the inaugural Rothmans Porsche Cup, winning and finishing second in rounds at Mosport.

“That Sebring win was unusual because the School Bus, as we called the 934.5, just kept trucking while some faster cars had problems with bad fuel,” Nierop said.

More Canadians deserved invitations, particularly Scar­borough’s Ludwig Heimrath as the 1977 SCCA Trans-Am champion and acknowledged Porsche master among this country’s racers. Others: Bartling, Horst Kroll, who won his 1968 Canadian championship in a Kelly-Porsche, JacquesBienvenue, Richard Spenard, Scott Goodyear. Not to men­tion Rick Bye. Rick was among the champions Porsche feted in Zufffenhausen one year and to me, that qualifies him for Rennsport Reunion!

And David Deacon, architect of Cup racing while run­ning Volkswagen Canada’s Porsche division, should have been among the executives. But great as it is, Rennsport remains forever American-centric. 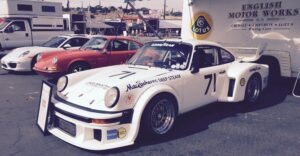 Information on Ludwig Heimrath’s 934.5 in which he won the 1977 SCCA Trans-Am Championship, placed in front of the car by its present owners, Californians Jim and Steve Lawrence 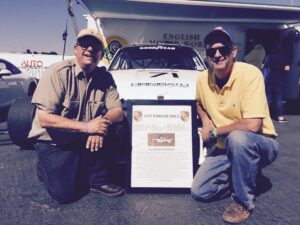 The Lawrence Brothers with their car.

Fortunately, certain American car owners celebrate their Canadian connections. Jim Lawrence, a retired emergency room doctor, and his brother Steve, an investor, displayed Heimrath’s history on a sign in front of his Trans-Am triumphant 934.5 in the paddock. Even the livery honors the past, with MacEachern Deep Steam logos on the front fenders; back in Toronto, Bill MacEachern is still in the cleaning business, still driving his million-km 930 Turbo.

“This is probably the most significant Porsche in Canadian racing history,” Jim Lawrence enthused. “Really, it should be in Canada. We’d love to bring it to Mosport (Canadian Tire Motorsport Park) for the vintage racing festival, if they’d be interested in featuring it and having Ludwig out for a reunion with his car.”

Steve Lawrence charged from 16th to ninth in Sunday’s Carrera Trophy race, ahead of famed Porsche pilot and engineer Jurgen Barth, Nierop in another 934.5 (not his Sebring winner) and another two dozen racers. “What a driver Heimrath must have been,” Law­rence said, “because in a lot of corners you have to drive this car with two feet – one on the brake and one on the gas – to keep the turbo boost up. It’s not easy.”

Entrants came from as far as Australia but Gregory Campbell of Surrey, B.C., was the sole Canadian. A stalwart in vintage racing, Campbell distinguished himself in his handsome 1955 Devin Pre-A special, finishing second in the Gmund Cup to Oregon’s Cameron Healy in the famous 1953 Porsche Cooper Pooper.

A Kremer Porsche 956 that looked like nothing that ever raced at Mosport, its yellow paint so bright Kees Nierop would have called it a school bus, turned out to have been raced by Heimrath and his son, Ludwig Jr., together with its regular driver, Kees Kroesemeifer in the World Endurance Cham­pionship round at the Canadian track in 1985. 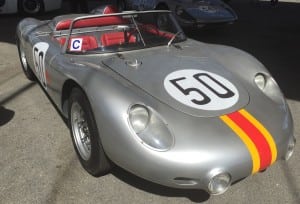 Jo Bonnier drove this RS-60 to second place in the first major race at Mosport, the Player’s 200. More recently, this car sold at the Gooding & Company auction at Pebble Beach for $5.4 million.

That was the year Hans-Joachim Stuck turned the fastest lap in Mosport’s history, in a Rothmans Porsche 962C, a lap he remembered well and was happy to discuss when asked at the Rennsport autograph session.

It was a golden era. Porsche racing cars practically owned Mosport from 1973, when Mark Donohue intro­duced the 917 Can-Am crusher, through 1985 when Stuck and Derek Bell dominated that WEC race in the 962C.

At Rennsport, wherever you trekked beneath the intoxi­cating California sun, the cars and the stars took you back. Every driver was ready to reminisce. Every car looked like new. Even the engineers whose minds facilitated the race successes, such as Norbert Singer, radiated satisfaction. Unforgettable.

Dan Proudfoot writes about collectible cars in The Globe and Mail’s GlobeDrive. He reported on car racing for newspapers and wire services from 1965 through 2001. Dan is a PCA UCR member who loves the track as much as his P-Cars.