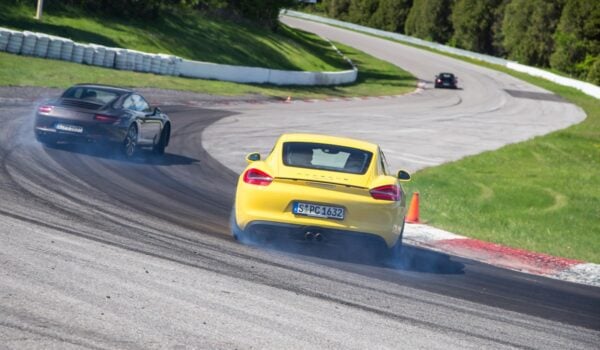 The PWRS instructors getting sideways at corner five.
We did not get to try this

The greatest show on track

Run away and join the Porsche World Road Show

By Emily Atkins, Provinz Editor
Photos courtesy of Porsche Canada, except where credited

What are the top five reasons to get to know your Porsche dealer?  911, Cayman, Boxster, Panamera and Cayenne. Show enough interest and you may get invited to the greatest show on track.

All five were on the track or in the woods at Canadian Tire Motorsport Park (Mosport) for the Porsche World Road Show (PWRS) media day on May 31, and so was Provinz. Our photo editor, Eshel Zweig and I were lucky to get a couple of the 50 or so spots for the day-long exposure to all the cars available in the current Canadian Porsche lineup.

The Porsche World Roadshow  is designed to give prospective Porsche buyers (or owners looking to upgrade) a chance to intensively drive the cars the way they were meant to be  – fast and with intent. Each of Canada’s 14 Porsche dealers gets a chance to invite its customers to a day at the track. Porsche Cars Canada has been hosting the event every two years, since 2009. The first PWRS in Canada was held at Mosport, and again two years later at Calabogie. It was back to Mosport this year, taking full advantage of the new conference facility and track improvements. 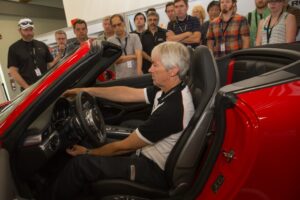 The day was divided into six segments, not including the three delicious meals provided. The Cayennes were put through their paces on the off-road course that runs through the woods and alongside the GP track back straight. On track, two groups took turns running brisk laps. The Cayennes and Panameras kept company, while the 911s and Caymans made up another group. On the lower paddock a solitary Boxster S turned laps on the tight and timed slalom course, providing a competitive element to the day. In a second paddock zone a 911 Turbo S showed off its epic acceleration and braking in a launch, brake and avoid exercise. The finale was a hot lap in a randomly selected vehicle with an instructor at the wheel. Coming through turn nine sideways in the 911 Turbo S was definitely the day’s climax.

What follows is a photo essay showing what you can expect when you get your invitation when the Porsche World Roadshow next rolls into town.