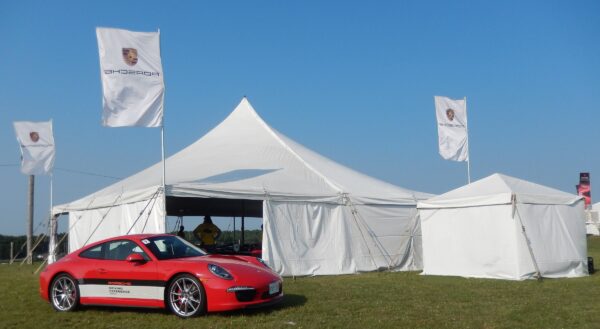 The International Motor Sports Association (“IMSA”) has a 13-race schedule for the 2015 season of the TUDOR United SportsCar Championship (“TUSCC”). Canadian Tire Motorsport Park (“CTMP”) hosted the only Canadian race for the TUSCC, July 10th – 12th and it was also the location of one of the six Porscheplatz that Porsche Cars North America (“PCNA”) is organizing in 2015.

The #911 and #912 Porsche Factory Drivers of Porsche 911 RSR and the #17 Team Falken Tire Drivers of Porsche 911 RSR competed at the GT Le Mans (“GTLM”) class of the TUSCC race on Sunday July 12th. The TUSCC race features two styles of cars, Prototype and GT (Grand Touring) and each style of car has two classes, Pro and Pro-Am. The Pro classes feature a professional driver line up while the Pro-Am classes pair a professional driver with an amateur driver. A Pro class and Pro-Am class are designated by red and blue markings on the number panel, respectively.

On Saturday July 11th, four Porsche Factory drivers and two Falken Tire drivers came to the Porsche hospitality tent and did Q&A with us.

The Porsche Factory Drivers were:

The Team Falken Tire Drivers were:

Below were the key takeaways from the Q&A session with both the Porsche Factory Drivers and Team Falken Tire Drivers:

• The most difficult corner at CTMP is Corner 2, which is a blind, high-speed, downhill, double apex, off-camber corner with an elevation drop of 45 feet.

• No braking before the turn in to Corner 4. (Probably only the pros can do this!)

• Corner 5 (a hairpin made up of two tight right hand turns, 5A & 5B connected by a very short straight) is a very technical corner and it is easy to lose time if not exit properly.

• After exiting Corner 5B, racers should stay on the right hand side of the track until the end of the back straight, so they can position the car on the inside of Corner 8.

• The top speed at the back straight of CTMP is the same for all race cars but the new technology helps to improve the speed at corners.

• The four Porsche Factory Drivers attended eight days of intense training at the pre-season Porsche GT Driver Training Camp in February 2015. The camp included eight days of intense training in preparation for the 2015 motorsport season. Each factory driver had to do six hours of endurance and power exercises (to improve speed, flexibility and coordination) every day. The Porsche GT drivers were also put through team-building exercises to bolster cooperation and communication.

• They all have to undergo cardiovascular exercise such as cycling and running several hours a day. Both Nick Tandy and Patrick Pilet are also golfers and they said that golfing helps them to stay calm and focused.

• The #17 Porsche 911 RSR was the only race car in the TUSCC race that used Falken tires instead of Michelin tires.

Nick Tandy took #911 Porsche 911 RSR to the top qualifying spot on Saturday July 11th with a record lap time of 1.14.829. Congratulations to Nick Tandy and Patrick Pilet for putting their #911 Porsche RSR onto the top of the podium in Mobil 1 Sportscar Grand Prix at CTMP on Sunday July 12. This was the second win for Porsche in the GTLM category this season, and first for the factory team.