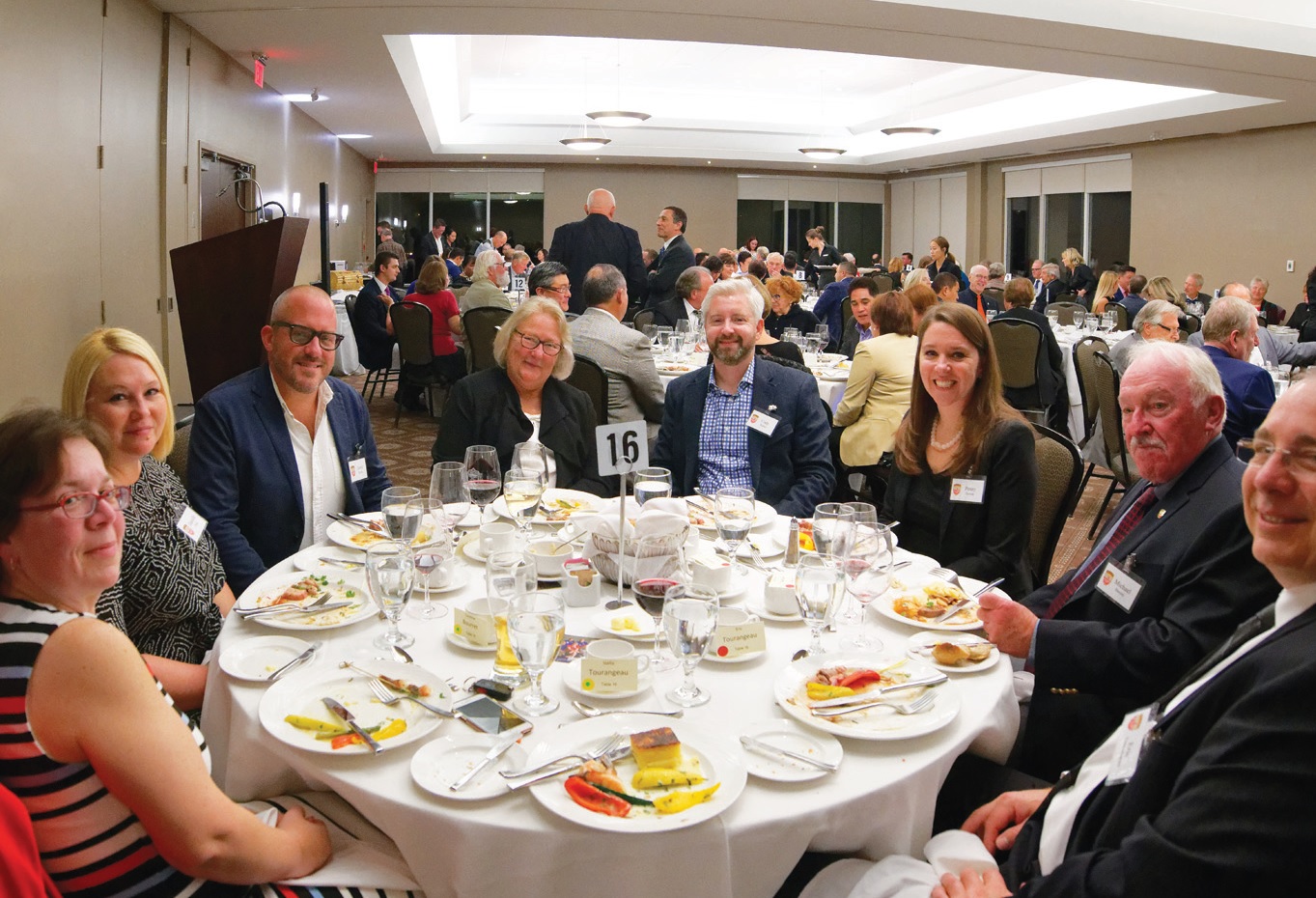 On Saturday October 29, about 160 Upper Canada Region (“UCR”) members and friends celebrated a record year of event participation at our Annual Banquet, which took place at the Islington Golf Club. The annual banquet is an occasion to give recognition to our long-time partners, volunteers and members who are the best ambassadors of the Porsche brand. We cur­rently have 2,800 primary members, which makes us the largest region among 143 regions at the Porsche Club of America. If we include the affiliated or family members, we have close to 4,150 members at the end of October. We would like to express our sincere gratitude to Downtown Porsche and Porsche of London, who’ve been supporting UCR membership growth by offering free first year PCA membership to everyone that bought a car from them.

Our banquet began with an opening prayer by John Adam, Past President & Club Historian. Cindy Jacisin, National Secretary of the Porsche Club of America was the special guest of honour at our banquet, flying in from Chicago to attend. Cindy did a “Stand Up Sit Down” by asking all participants to stand and then count down the years that each member joined UCR. She then presented a PCA flag to the longest-serving members – John & Rosemary Adam, who joined UCR in 1983. 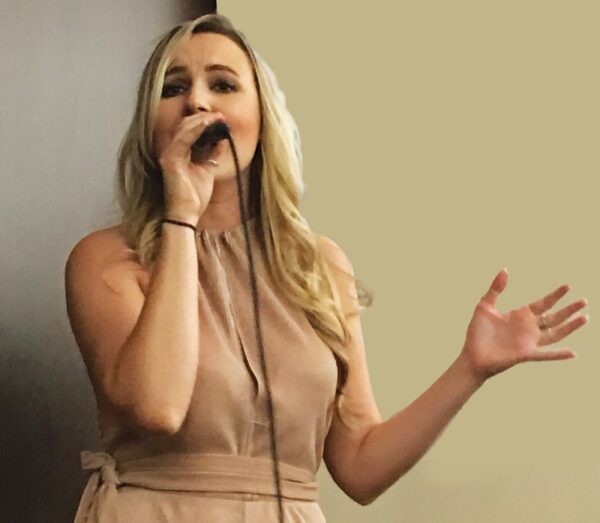 At the banquet, I thanked all UCR volunteers for delivering a total of 65 events for more than 4,000 par­ticipants in 2017. About 30% of these events were track-based performance driving events with the remaining 70% for members and families. I have classified these events in the following four categories: 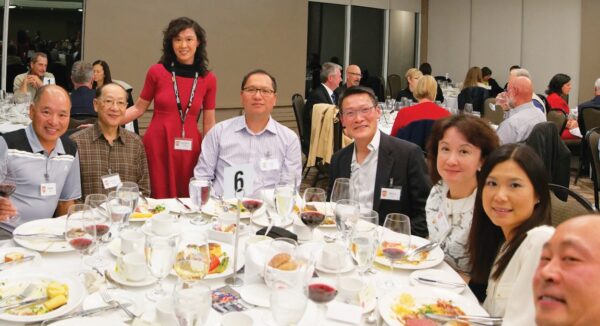 Photos by Peter Blake
Left and above: About 160 members and guests gathered for our annual banquet 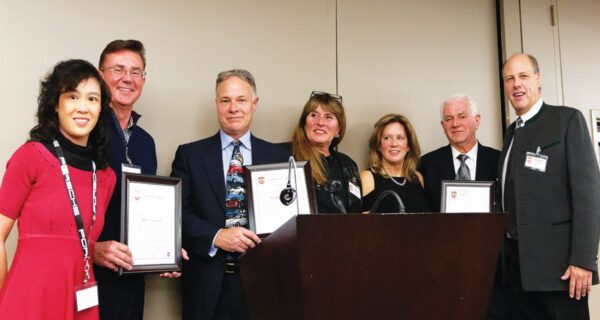 The 25th Anniversary certificates being awarded by Kathleen Wong to Peter Earnshaw, Kevin and Lilian Kurnik, Auguste and Penny Lecourt, with congratulations from Michael Pohlmann. 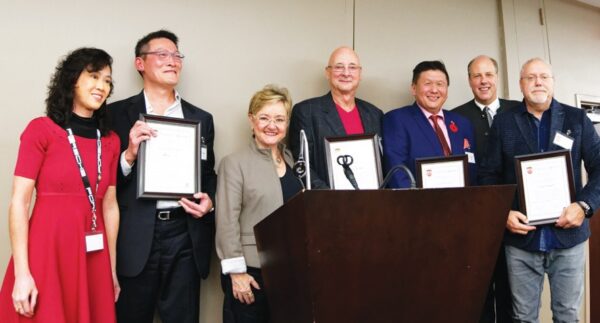 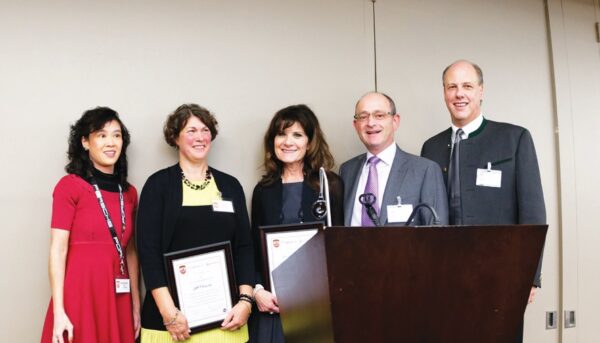 At the 62nd Porsche Parade in Washington, Provinz magazine won 1st place at the Newsletter Contest for Class VI (Regions with more than 1650 members) award. Congratulations to Randy Gananathan (Provinz editor) and his team on this well-deserved achievement. It is a daunting task for volunteers to produce twelve first class issues, 48 pages each, of a printed on paper newsletter that is mailed to all 4150 members of UCR. Peter Helston (Past President 2002) has volunteered to be our Sponsor­ship Chair to assist with recruiting new advertisers for Provinz and UCR sponsors in the coming year.

At the banquet, we recognized many longstanding PCA members, who have been Porsche enthusiasts for five, 10, and multiple five-year periods thereafter. There were 324 UCR members in such categories in 2017.

Michael Pohlmann (Vice-President) and I pre­sented “Certificates of Appreciation” to 20 anniversary members attending the banquet. We welcomed three first-time UCR event attendees by giving Porsche pins to Albert Luce and Michelle Gravina plus Linda Woo, who joined UCR in October 2017 and immediately attended the first available event, our annual banquet! 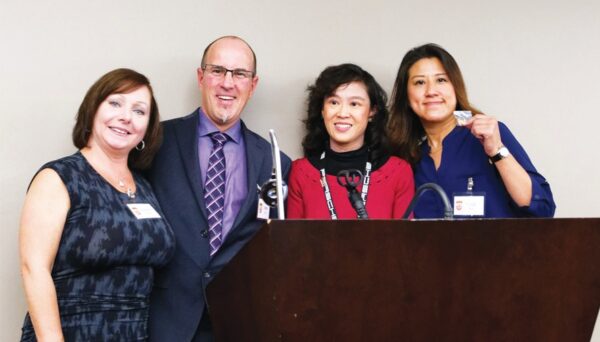 The last recognition of the evening was for our “2017 Enthusiast of the Year”. I met this gentleman (who joined UCR in 2016) at a new members’ social in March 2017 when he pitched his first Fun Run in Niagara Falls. Through my network, I learned that he experienced some issues during his inaugural Niagara Falls Fun Run in May, but he was not discouraged. He wrote an email to me explaining the issues that he encountered and what he planned to do to improve his next Fun Run. Since then, he has organized six out of 20 Fun Runs that we had in 2017. He lives in Niagara Falls and two Fun Runs he co-hosted took place in the Muskoka region. In one of his Fun Run follow-up articles, he wrote “People thought I was crazy. I was going to wake up at 4:00 am to drive over two hours to Muskoka, then drive few more hours during the event and drive another two hours to get home. But I told them, I am driving a Porsche!” Congratulations to Stefan Wal­ther, who won UCR’s 2017 Enthusiast of the Year Award!

During the banquet, I conducted a quiz. The ques­tion was “How many UCR volunteers do we have at the banquet tonight?” I asked all banquet participants to write their answers on the back of the table place cards. After Michael Pohlmann (Vice President) and Terrence Tong (Treasurer) had collected the table place cards, I asked vol­unteers at each table to stand, so I could call out the total number of volunteers at each table. Terrence Tong, our Treasurer who is a Chartered Accountant, added up the numbers and revealed that there were 43 UCR volunteers at the banquet. It was interesting that eight participants had 42 as their answers but only Angela Sun had the cor­rect answer of 43 and she won a $50.00 UCR Goodie Store gift certificate. 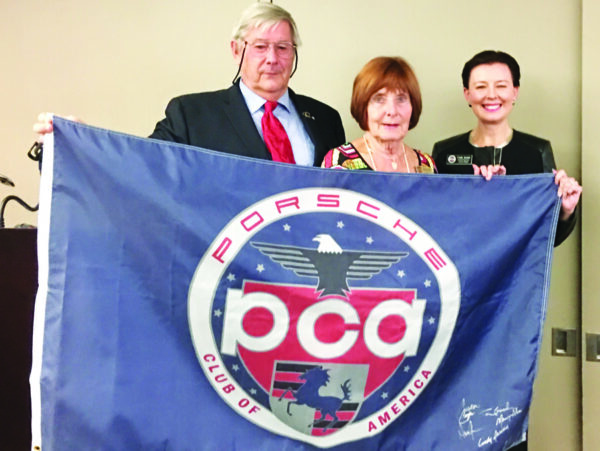 Longest-serving members John & Rosemary Adam, who joined UCR in 1983, and are both past-presidents, recieved a PCA flag from PCA National Secretary Cindy Jacisin.

The highlight of the evening was the performance by Elyse Saunders, who is a Canadian singer and songwriter. Here is the link to her song: https://www.youtube.com/ watch?v=4UJ4J_VXyvc

Our thanks to Veronica Pohlmann who invited Elyse to perform the song “RISE” at our banquet. RISE tells the remarkable true story of Jessica Phoenix — a two time Canadian Olympian, f our times Pan Am Medalist and one of the top equestriennes in the world. The song was about how a small-town girl fought through life-threat­ening injuries and injustice to achieve a greater goal — and doing so with a level of determination, confidence, and grace that shines bright. You can follow the story at www.jessicaphoenix.ca, https://www.elysesaunders.com and www.roar-group.com 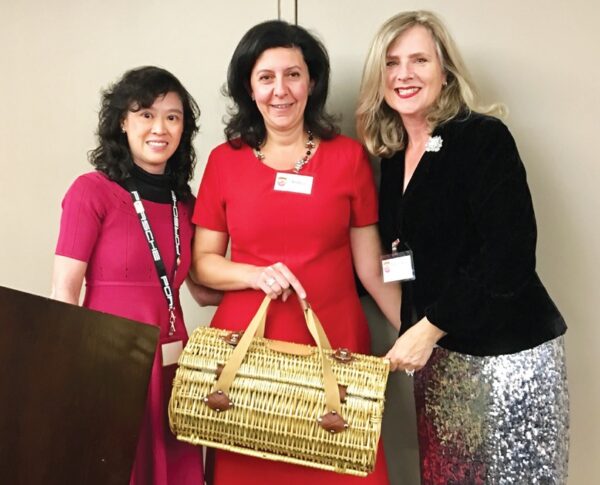 During the rest of the evening, I showed the follow­ing three UCR videos. These videos were produced by FlightSquad Media, which is a group of university students studying engineering and sciences. The team’s manager is Ryan Tam, who is the son of UCR member Roy Tam. I would like to take this opportunity thank Ryan and his team for the tons of hours they spent to edit the footage and produce these three amazing videos for UCR. You can also see them via the UCR website.

Our banquet ended with a closing prayer by John Adam. Mark your calendars – our 2018 Annual Banquet will be on Saturday October 27, 2018.