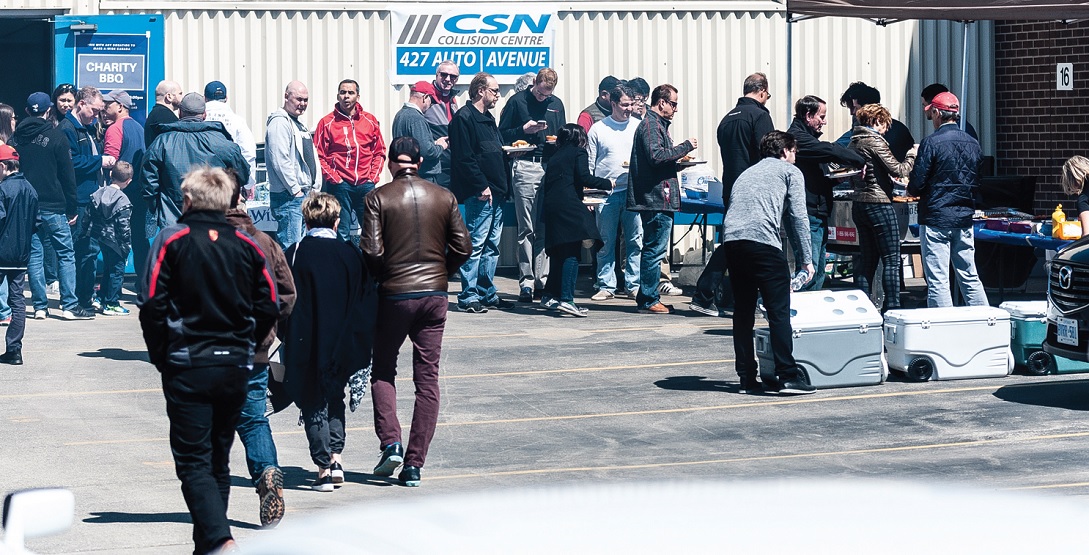 Great big thanks to all those who attended this year’s PCA UCR Open House – Shift into Spring. Beauti­ful Spring weather and a great location, blessed the event. We couldn’t have asked for more! It was great seeing 350+ UCR members and their families in attendance breathing-in all things relating to Porsche.

The UCR Spring Rally started off the day earlier that morning, departing from 427 Auto Collision just after 8:30am and ended around noon, back at 427 Auto Collision. Rally and member traffic in and out was controlled by one of our finest: an off duty Toronto Police Traffic Officer. Rally winners received trophies and prizes presented by Sajjad Butt, UCR Rally Master.

Kathrin Menge from Porsche Canada provided free Posters and copies of Christophorus, the Porsche factory magazine for anyone interested. We had both Chubb and Hagerty insurance companies represented, three racing cars for viewing (GT3 by John Montgomery of JRP and 944S by Ernie Jakubowski – Mantis Racing) and adjacent to the Parts Swap (primed by Mark Solomon), the SOLHA (Southern Ontario Long Hood Association) was proudly displaying a restored 1980 Porsche SC. Racks of Porsche UCR items were offered for sale by the UCR Goodie Store in a separate room.

An excellent barbecue buffet lunch was provided by 427 Auto Collision and expertly prepared by their young team led by Jessica, Gabriel and Giulian D’Alessandro. Raffle tickets were distributed at lunch in exchange of a minimum donation of $5, with all the proceeds going to 427 Auto Collision`s favored charity–Make-A-Wish Foundation. In total, $2500 was collected at the BBQ and 427 Auto Collision pitched-in another $500.

A raffle draw followed at 2:30pm, with the lucky winners receiving many prizes, such as 8 x $50 gift certificates to the Goodies Store, as well as many ad­ditional gifts provided by participating vendors and Porsche Cars Canada. John Tsourounis claimed the prize he won at our April Social, from WeatherTech Canada. Throughout the day, our host 427 Auto Col­lision offered tours of its new addition to their vast building complex and quite impressive paint/prepara­tion workshop, with 17 automated stations. 427 Auto Collision is Porsche certified and also by many other automobile manufacturers.

At the end, our President Kathleen Wong thanked all in attendance; PCA-UCR members, their families, guests, vendors and expressed gratitude towards our gracious host 427 Auto Collision – D’Alessandro fam­ily, actively represented by 2 generations, under the leadership of Lorenzo, Frank and John D’Alessandro!

A thank you all for attending and hope to see you at more Porsche events throughout the year. The event was a big success, by all accounts!