On a lovely evening, the first day of summer, June 21st, PCA UCR Porsche 944 racer Jon Dunski gen­erously opened his home garage and workshop to fellow 944/968 owners for an evening of in-depth, all-things 944/968. Jon’s driveway is big, but it was overflowing with various types of 944 and 968, as well as 911s, Boxsters and Cayennes.

Guests enjoyed seeing Jon’s 944 Cup race car and learning about how the car has been modified and setup for perfor­mance and reliability improvements. This was a story of escalating performance and investment as the 944 became ever more optimized for track. A contrast was provided by Jason Dunski who used his cheap and cheerful 944 track car to show a low cost path to track fun, focusing on DE with a super-lightweight normally-aspirated 944. The Dunski brothers work together at track events as Team Ultraray Motorsports and have both become highly competent and fast track drivers using their 944 cars.

With Jason as a qualified mechanic, the shop service work extends to engine rebuilding. A dismantled 944 engine was on display. It provided an opportunity to see and touch the actual engine internals that some never see and offered visual info to discuss typical issues that sometimes come up such as seals, balance shafts and more. 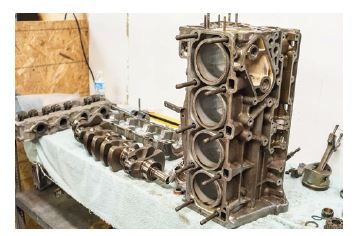 Jon’s year-round daily driver 944 was also available and showcased some of his work at restoring these cars. Originally bought as a likely parts car, Jon instead set to work on restoring it. There was a lot of discussion among the group on methods and parts sourcing for common issues; paint, sunroof gears, clocks, seat covers, seat motors, carpets, wheel sets, etc.

Jon and Jason talked about helpful vendors and sources for the parts and they also provided information on repair procedures for both track and road cars. Appreciating the help and advice they have received from fellow owners, especially fellow drivers at the track, they are happy to help 944/968 owners in UCR with maintaining and restoring these cars. 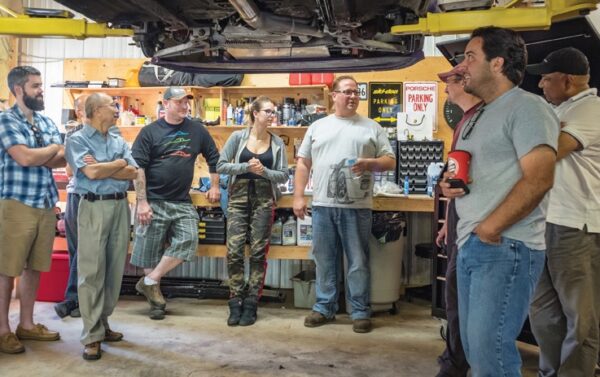 As the 944/968 Tech Session wound down everyone enjoyed touring and discussing the cars on the driveway. An original and immaculate 944 Cup car was much ad­mired and a group photo was organized (thank you Elliot). Immense thanks to Jon for his generosity and hospitality, and to both Jon and Jason for their time and courtesy in providing this informative session to 944/968 owners… and to Jon’s wife who cheerfully tolerated the invasion. Several owners commented on the addiction of these cars with many owning several.

I imagine all of us have partners deserving of our thanks for their tolerance.

Previous articleCan-Am Challenge 2018
Next articleProvinz: Every Old Porsche has a Story

A Visit to the Porsche Experience Centre