Assassin in a Well Tailored Suit 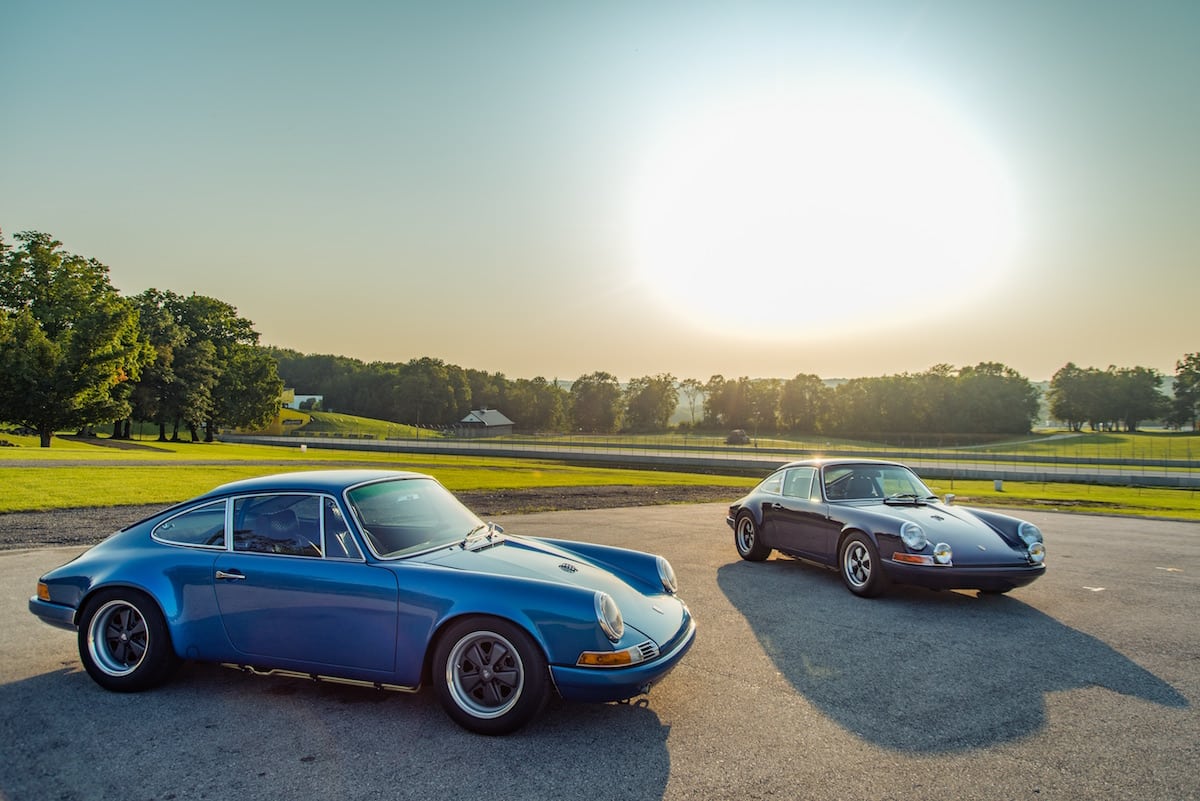 I have been a Porsche fan from my childhood days growing up in Montreal in the 60’s and early 70’s.

As I was delivering newspapers in my old neighbourhood in the summer of 1970, I came across a Signal Yellow Porsche 911. Back then I didn’t know anything about Porsches, but I immediately knew it was something both different and special, by its appearance. I always looked forward to seeing it on my newspaper route. I also imagined that at some point I would drive one of those cars.

Before my 1973 911E entered my life in 2015, I had owned modern 911s and enjoyed them enormously. Nostalgia drew me back to one of the early 911s and my search began for a long hood. I eventually found what appeared to be a beautiful Metallic Blue on black vinyl example that spent its life in Texas. 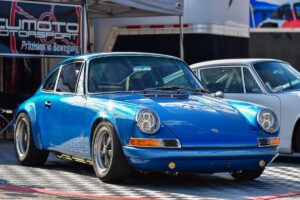 My car made its way north from Florida in November 2015 and before winter snow had set in I had it on the road. While the car was a beautiful sight, the driving experience was somewhat less than I had hoped for. In short, it felt like a 40+ year old car: a bit sluggish, floating on the road, unsupportive seats, and hard to shift precisely. If this was a pristine vintage 911, nostalgia was losing to reality.

Shortly after I had purchased my vintage 911, a friend forwarded me an article in Jalopnik, which introduced us to a small Porsche specialist shop in Wisconsin called Accumoto Motorsport, run by an accomplished racer, Mark White. The article featured a remarkable build recently completed by Accumoto that was nicknamed “Dirk”, a 1980 SC that had been rebuilt, modified and modernized. By description, the car’s capabilities had been maximized and at the same time it kept the analog experience of the air-cooled era. Accumoto had also shown an attention to detail in how it had refinished all mechanical and interior elements of the car. It was achingly beautiful.

The path for my car was clear… in January 2016 my car was on its way to Accumoto and my business relationship with Mark White had begun. 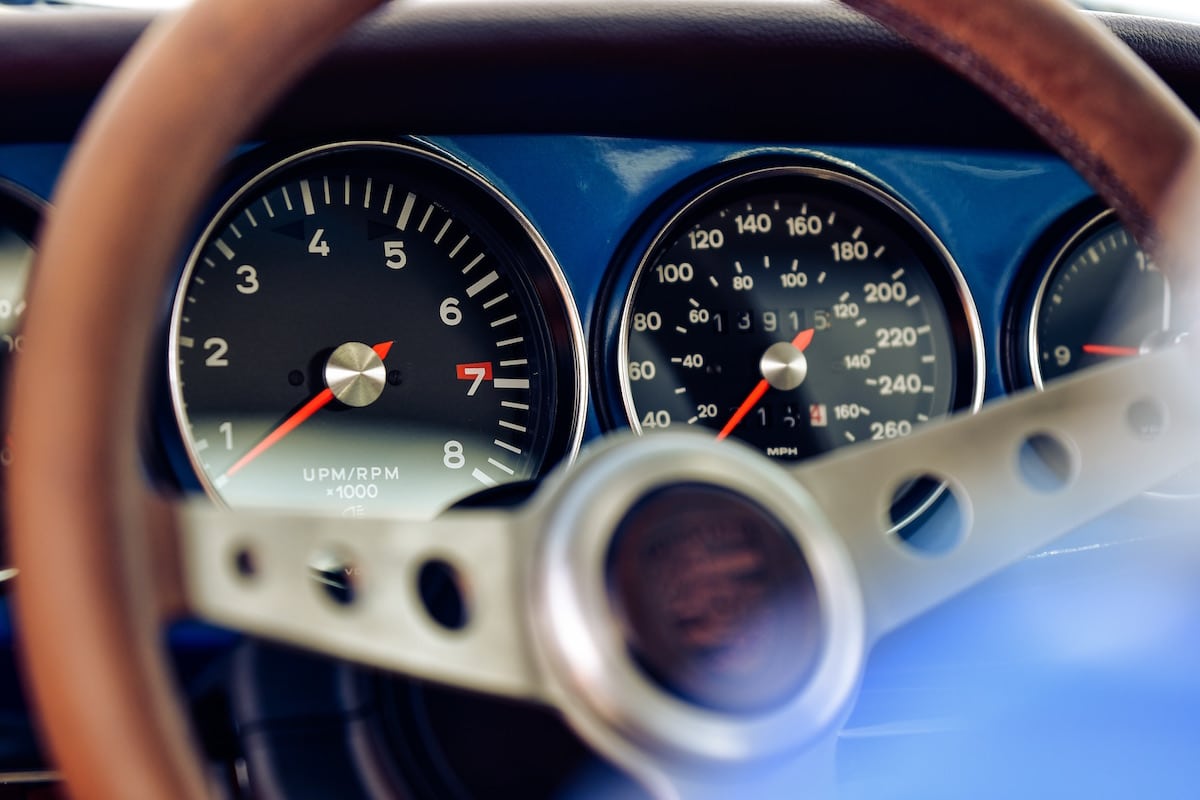 After Mark and his team had some time to scope out the car and its pluses and minuses, I went to meet them in person in late February, 2016. Their review had unearthed some concerns about the true state of the car’s health. This would require further exploration over the months ahead. 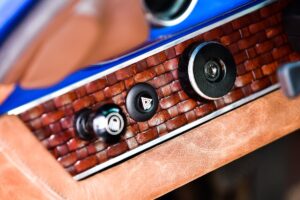 We also settled on the extent of the mechanical, interior and exterior modifications. They were going to be substantial. I had identified three priorities: I wanted the car to be reliable—when I had the opportunity to use the car it had to work (it was not going to be a “daily driver” but not a “garage queen”, either). The car had to be safe—brakes, lighting, etc., should be on a par with modern cars. I also wanted the car to feel younger than its age. Less “floating” on the road, more precise handling, seats that were supportive and so on.

While I never had had a vintage car rebuilt, I had renovated several homes over the years and my clear learning from those experiences was to expect the unexpected. It turns out that rebuilding a car with an uncertain history is very similar. As well, the cliché “beauty is only skin deep” is also worth bearing in mind.

My car, as purchased by me, was advertised as a pristine examplee of a ‘73 long hood. The seller, a Florida based Porsche used car dealer, touted it as having benefited from a full restoration. To be fair to them, they had been working with a Texas client and were selling on consignment using information provided to them by him. But it was far from accurate.

Mark White had worked with all sorts of starter cars. His preference is always to work with an “honest car”—a car that tells it like it is. Visible rust, or even flaws that are not obvious to the naked eye, but aren’t purposefully concealed, would constitute an “honest car”. Those cars will reveal themselves with just a bit of due diligence. My car was another variety. It was about as dishonest as they come.

In short, the beautiful exterior hid rampant rust. In its past, poor or shoddy repairs were completed and then concealed with metal that had been glued over rotting or rusting areas. Key suspension points were held together with weak welds and then covered over with heavy undercoating. As these realities became known, the scope of work for Accumoto grew. The tear down of the car, as a matter of necessity, had to be completed.

The car was stripped to bare metal and all problematic areas were laid bare. Extensive metal work was required and completed. While in that state, the rear fenders were given RS flares and the hood was adapted to accommodate a centre fill gas tank. 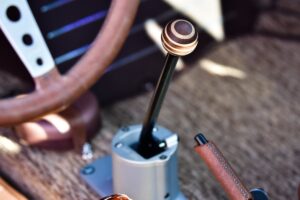 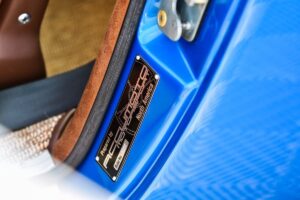 Mechanically, the engine was bored out from its original 2.4 litre to a 2.8 litres. Compression ratios required a double plugged set up. Stacks became exposed to show the beautiful flutes you could see in the photos. While I know many will consider this to be heresy, I wanted the reliability and predictability of electronic fuel injection. Accumoto arranged for a motec unit to be added in place of the original MFI. The new engine dynos at about 280 horsepower. The 915 transmission was rebuilt, re-geared to make city driving more fun and a limited slip differential was added.

A new wiring harness was installed. The suspension features new, and customized for Accumoto, adjustable JRZ shocks coupled with other suspension components designed to work together in a vintage 911 but deliver a modern road feel. Rebuilt gauges now feature LED lighting (and an accurate quartz clock!). The headlights, driving lights and interior lights are all LED. The list goes on and on. 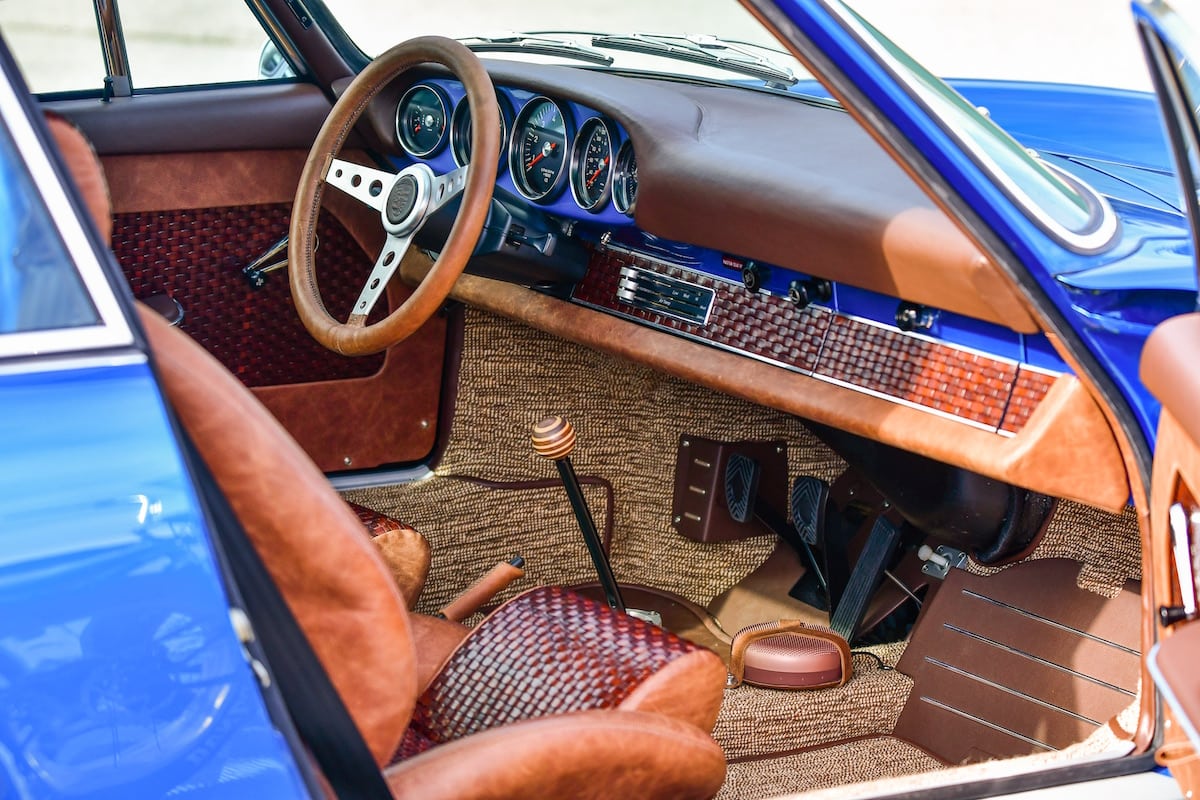 Accumoto’s strengths are not limited to their mechanical expertise. Mark White is quick to observe that the business roots (and their passions) are in vintage Porsche racing and his team’s success in competition demonstrates that. But his vintage race cars carry an amazing range of liveries true to the 60’s and 70’s. They are as beautiful as they are successful. 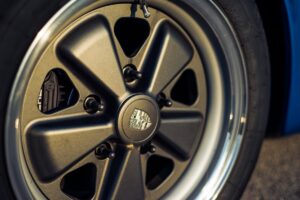 While Mark is obviously the common thread in the Accumoto story, he has assembled a pretty tenacious team. Lee’s engine and mechanical expertise is second to none. Will tracks the projects and delivers on numerous aspects, from electrical to mechanical, ensuring all of the elements of the car function as they should. Mike completed outstanding bodywork and painted the vehicle with a depth of colour and perfection you can get lost in. And Ryan has an eye for detail and built the entire interior (including the front trunk interior), the result of which can only be described as pure artistry.

This team helped me design and select the interior and exterior details that produced, in my opinion, a car that can enjoyed just by looking at it. It is both vintage and modern. To me, it is remarkably handsome. 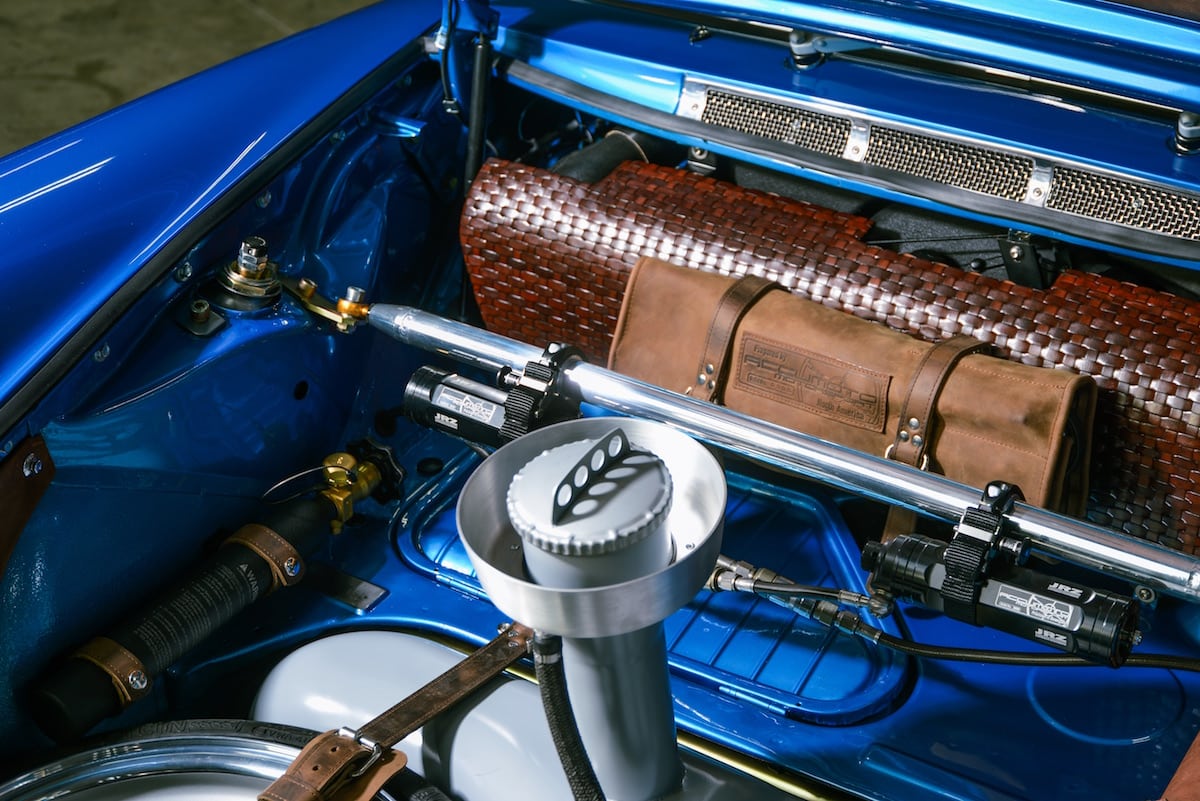 The car was with Accumoto for about 18 months before it was ready for me to test drive (pre-delivery). Accumoto had taken my car, together with a dozen or so cars in its racing team, to an event at Road America in late August 2017. My son Liam and I went on a road trip to meet my car and drive it there for the first time since its rebirth. I was both excited and more than a bit anxious. This was a long time in coming and after significant investment. Was it going to have been worth it? Would the new car meet my priorities that I laid out at the start of the process?

I am delighted to say it has proven to be everything I had hoped for, and more. It exceeded my expectations in every respect.

The final element of an Accumoto “street build” is to name the car. Mine is the 6th street build completed by them. In addition to “Dirk” featured in that Jalopnik article, prior builds include Lucille, Albert, Winston and Luther. I will leave it to Mark to explain how and why these names came about. But who was my car?

At Road America, Mark introduced me to “Mr. Wick”, named after the Keanu Reeves movie character. Why Mr. Wick? According to Mark, my car is “…an assassin in a well tailored suit…”

The full rebuild of a car is an intensive process for both the builder and the client. There are lots of potential points of stress and challenge. But it can be a very rewarding and satisfying experience as well. Working with Mark was a privilege and a pleasure. Through the nearly two years that this project ran, Mark became a good friend. I thank Mark, Lee, Will, Ryan, Mike and others at Accumoto Motorsport, who were instrumental in creating my spectacular 911 – Mr. Wick. 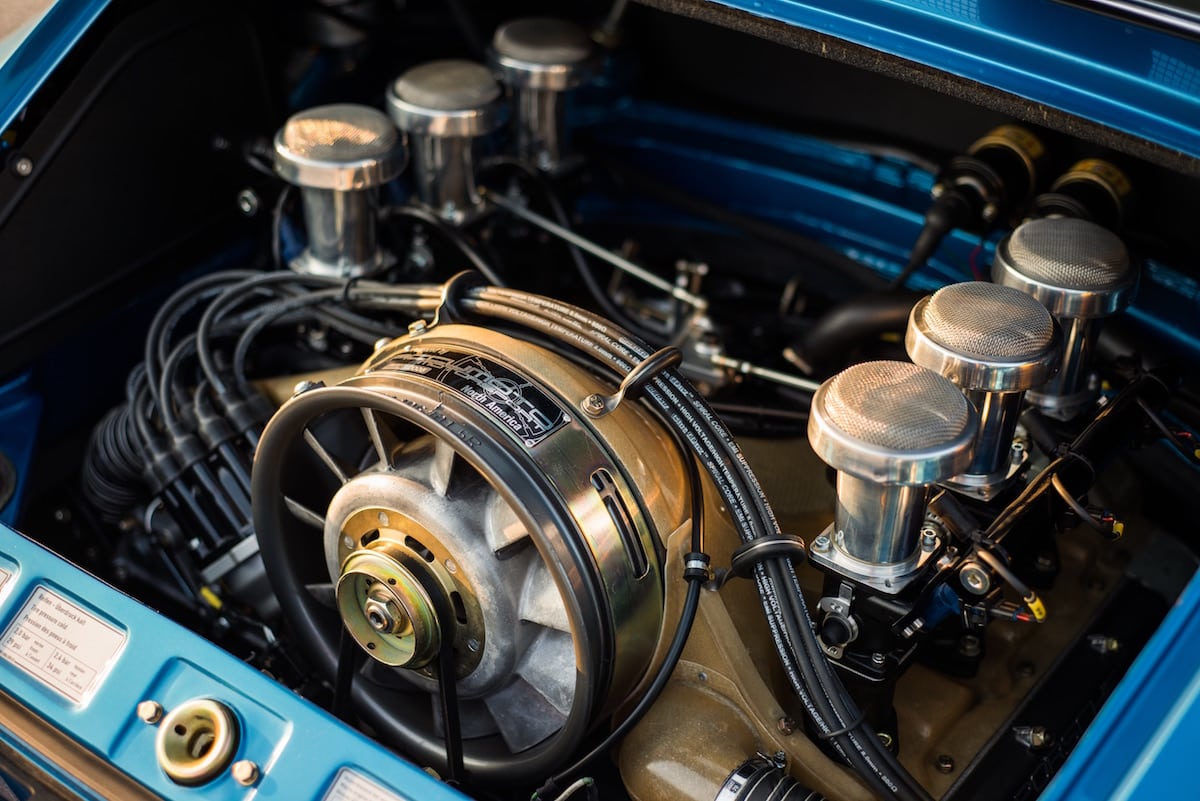 A Hearth Place Thanks to PCA Upper Canada Region