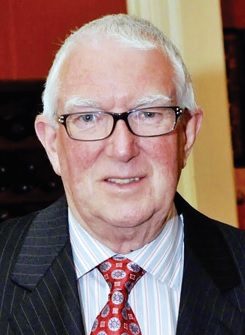 Clive passed away peacefully on January 30, after a short battle with cancer.

Clive was my best friend, a true friend. Clive and I met in 1965 at Sir George Williams University (now Concordia) in Montreal. We ended up growing up (i.e. maturing) and shar­ing accommodation in both Montreal and Toronto before his marriage to Eunice. My wife Beth and our family have always been close to the Van Werts.

Clive loved his family, his dogs (Bouvier des Flandres) and, of course, his PORSCHES! At the time of his passing he was the proud owner of a 1972 911 (fully restored) and a 1997 911 Turbo (mint condition). During the days he was active at the track he ran a 944S. He took great pride in driving his Porsches and his involvement at UCR.

Clive was a positive thinker who focused on the good things in life, yes, that definitely included Porsches. Always a ‘straight shooter’ and very down to earth (well, he was half Dutch), he loved to joke around with family and friends, often enjoying a glass of wine or scotch. At the drop of a hat he’d enjoy ‘belting out’ a Frank Sinatra tune. In his business life he was the co-founder and President of a specialty advertising firm.

Clive also held other posts at the Club including Track Chair and Advertising Manager for Provinz. During his years in the Club, like many other UCR members, he developed last­ing friendships. It was during his time on the Board of UCR and at the track he made good friends and would, in addition to participating in UCR events, travel around North America attending various racing venues. Good friends last a lifetime as have those Clive knew through UCR. At a dinner in Janu­ary, held for Clive and some old Porsche Club friends (see photo below – from left to right Phil White (UCR President 1993), Peter Manson (who flew in from B.C.), Umberto deBoni, Clive and Jurgen Kontor. It was an evening of fond memories and many laughs.

Dave Osborne, current Track Chair, who worked with Clive when Clive was Track Chair wrote him a letter after learning he was not well. In part Dave wrote “Clive was always the big guy in the room…My hope for you Clive…. is that you are proud of the amazing contribution that you made to your friends and your organization. Your early example has given me a guide on how to organize with kind­ness and humour…“ Clive and Eunice were very moved by Dave’s letter.

I was out of the country during most of the time Clive was active at UCR so did not participate in Club activities with him until a few years ago. Clive liked to recount his time with other Club members at the track, club meetings, socials and on trips to track events. He never tired of talking about Porsches and memories with other Club members.

There will be a ‘Celebration of Life’ for Clive at the Van Wert farm, just outside Meaford, starting around noon on July 14. If you wish to attend please email Eunice at cvw­celebration@gmail.com to express your interest and to get directions to the farm. Bring your Porsche – Clive would have loved to see them all.