What could possibly be better than introducing a wonderful twisty road to one of Zuffenhausen’s finest sports cars? How about introducing this same great road to a pack of purring pouncing Porsches, sharing with fellow enthusiasts the entire exhilarating experience!

Sure, just me alone attacking S-curves with my P-car is a blast, but doing so with several others enshrines my philosophy, “I’m heading out driving, who wants to come?”
This is where PCA UCR’s driving tours, formerly called fun runs, come in.

Another rewarding aspect of driving tours is discovering new roads as well as breathtaking scenery, much of it right here in our back yards across Ontario.Indeed, when I first set out to host driving tours I, myself even as a local resident, discovered awesome new-to-me roads just steps from my home in Niagara. I enlisted the help of a local motorcycle buddy, we mapped out some routes on Google Maps and then, the fun part, headed out to test them. I had no idea these incredible roads existed, winding around endless kilometres of rolling hills, grassy meadows and vast vineyards. Parts of Niagara so close to home yet I hadn’t discovered them in over 10 years of living here!

A route on a map is one thing. Driving this route can be entirely different. And driving this route with 25 other Porsches very different again. The whole intent of driving tours is to drive your Porsche together with others, not separately. Things that can easily split up a group include stop signs, traffic lights, especially left turns (on busy roads), as well as heavy traffic. So tweaks are usually needed before a driving tour happens and even after, when planning for the next outing. I’ve often headed out the very next day after a driving tour to tweak and perfect a route — solving problem areas that split up the group and adding new diversions to catch more twisties and enhance the fun.

I’ve also Googled the Interwebs to see what others have discovered. Once again, what you find here can sound great in theory but so very different when put into action, especially for a driving tour with many cars. One example is Snake Road in Burlington which, by its name, sounds perfect for Porsches but if you do some more Googling you’ll find it was named after the actual snake, the slithering reptile, not its actual physical serpentine orientation (though it is indeed quite snaky). Reasons I precluded this road from any driving tour is that is it relatively short, fewer than five kilometres, with a relatively low speed limit, connects dense built-up neighbourhoods and, as such, is fairly heavily travelled by locals in both cars and on bikes, sometimes also called Porsche impediments. 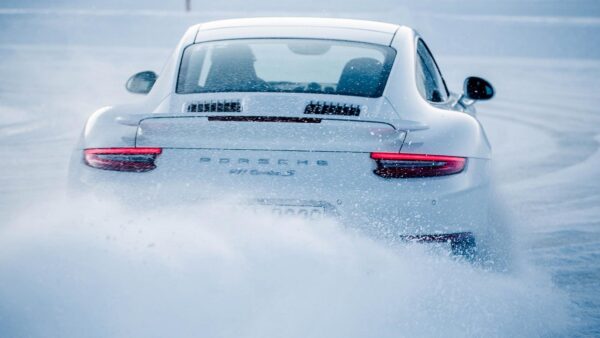 Another area of “great roads” that I Googled is Old Ancaster Road, Sulphur Springs Road and Mineral Springs Road in Ancaster, not far from Snake Road so I thought I could incorporate all these into a driving tour. But what a map does not show you on your computer, tablet or smartphone screen is when the road turns from asphalt to gravel. I’m not sure about your Porsche but mine is deathly allergic to flying gravel. It risks breaks out in horrible boils and blemishes, also known as paint chips. I shudder to even think about it. This route was also discounted because, like Snake Road, it went through densely built-up neighbourhoods, plus has several traffic lights and stops signs, in addition a huge tourist attraction with the Ancaster Mill, and so would easily trip up and split up a group of Porsches.

Then there is Ridge Road, which is cherished greatly by motorcycle and car enthusiasts alike, starting atop the escarpment near Hamilton and heading into the Niagara region. This road offers tremendous views of Lake Ontario and the Golden Horseshoe, is in nice repair with very smooth pavement, but is rather straight, not a lot of fun. However, I still added this to some of my driving tour routes as it does connect to some very nice curves. And I’m sure you’ve heard of Forks Of The Credit? Well so has every other car enthusiast, motorcyclist, hiker, biker and cop. Sorry, not on my driving tour. I can drive faster and in more circles on a busy Saturday at a Walmart parking lot.

Some of this province’s splendid scenery I’ve been so lucky to uncover on a driving tour include not only the ins and outs and ups and downs of the Niagara escarpment, literally right in my back yard, but also the rugged countryside and endless waterways of Muskoka; the towering hills, plunging valleys and panoramic vistas of Blue Mountain and Georgian Bay; the big curves and little towns of Kawartha Lakes and Lake Simcoe; and the tucked-away gem that is Lake Erie’s meandering coastline.

For 2018, Peter Hoffman and I, your driving tours co-chairs, are eagerly planning another season of incredible outings packed with great roads and spectacular scenery. We’ve reached out to last year’s hosts, as well we encourage new hosts to contact us with their ideas. We are here to help. Reach us at driving-tours@pcaucr.org

Several driving tours are almost finalized including old favourites in Niagara and Muskoka as well as new excursions plotted out by new hosts. And you don’t have to wait until the snow has melted! Winter driving tours on Feb. 24 and March 24, both Saturdays, featuring nice, not too long, twisty routes along the Niagara escarpment, followed by a delicious three-course meal in Niagara-On-The-Lake are winter therapies for the Porschephile. Sign up today, as long as your P-car wears all-season or winter tires.

Ladies and gentlemen, start your engines!

Previous articleHow to Build a Porsche Collection
Next articleProvinz: Valentines Day With My Two Loves

Not Your Typical Sunday Drive

A Visit to the Porsche Experience Centre