Provinz: How to build a Porsche collection

How to build a Porsche collection 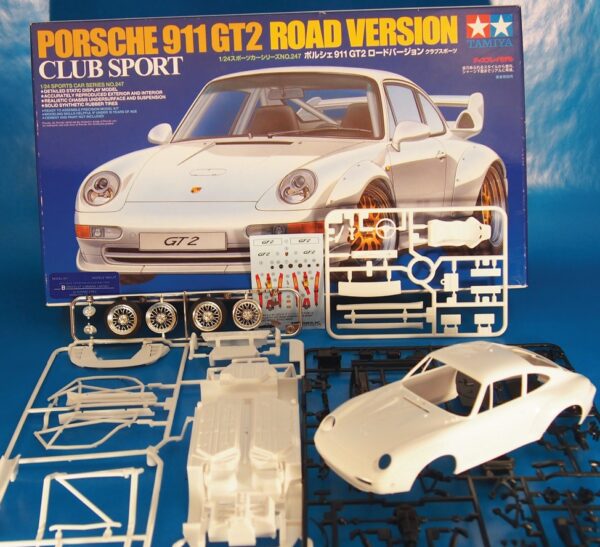 Make it all in miniature!

The easiest way to build a Porsche collection is to have lots of money like Leno or Seinfeld. Of course then you will need buildings as well. Another way is to be proficient with tools, knowledge and a space to physically build or restore Porsches. Also, not for the average Porschephile among us. One could collect diecast models but you don’t actually do anything other than buy them and you must get what already exists.

What I do now is what a lot of us did when we were younger – I build my own scale models from kits. I started before I was ten and built until my late teens when other interesting things captured my attention. I returned fully to the hobby in the late eighties. This was a time when many other people rejoined the hobby. I had always con­sidered the hobby a solitary pursuit but that has changed in the last few years. I belong to a group of excellent builders and attend shows. The shows are either judged or not judged and each has its own attractions. I have made friends through the hobby from all over North America.

Of course materials (and hopefully skills levels) have changed a lot from my youth and even the early nine­ties. For a beginner, and indeed an experienced builder, getting a nice shiny paint job is still a challenge. However with the new more forgiving paints, patience and practice anyone can get a good result. So you might check out a hobby show, the Internet, hobby stores and of course talk with your local modeller.

What follows is a brief overview of the model-building hobby today with some examples of my builds. 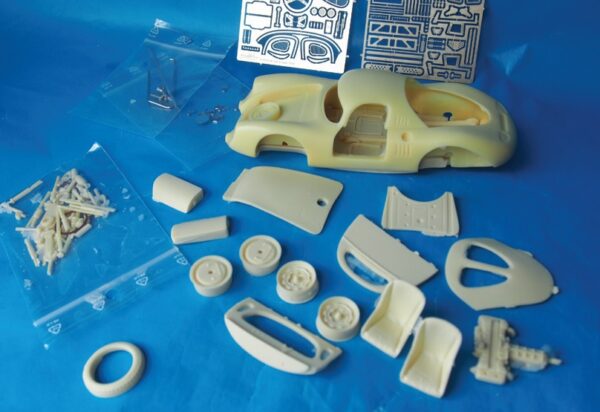 1) Modelling has a thriving aftermarket industry, just like the full-sized world! There are custom decals available along with photo-etched and resin parts to make different versions of the factory kits. Here we have a “cottage-industry” resin kit of a Porsche Carrera Panamericana – a model that wasn’t considered viable to replicate by the mainstream companies. These kits are usually made in limited quantities. 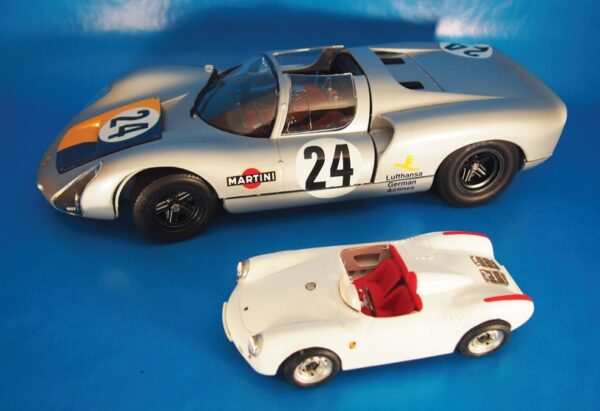 2) The relative size of a 1/12th and 1/24th scale builds of mine. There are other scales available and 1/43 used to be popular in kits a number of years ago. It is still popular in the diecast collecting world as you can fit more in your available space. The big one is a 910 with after-market decals. The 550 Spyder is a combination of a resin body, a mainstream kit and scratch-building. The main picture opposite is a typical current model kit. They are similar to those that have been around since the beginning of the hobby, but are now more precise-fitting and accurate. Kits are made by several mainstream manufacturers with those made by Tamiya considered to be among the best—they are the “Porsches” of modelling, if you will! 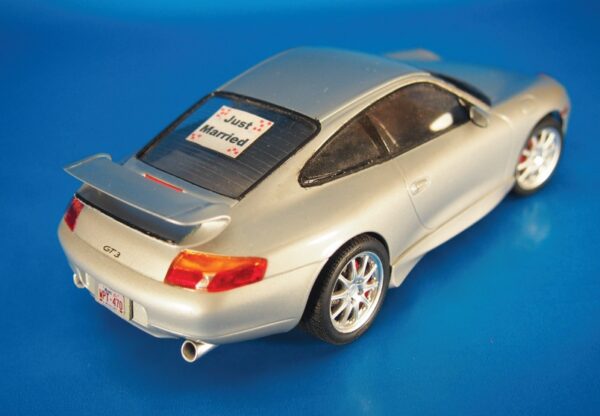 3) This is an OOB or out-of-box build which for long time modellers is hard to do as we love to make things more accurate or more detailed than what comes in the box. The “Just Married” sign is a photo-reduced sign that was on the car our friend lent my wife and I when we left our wedding. The plate is also a copy of the one on his car. (So you can see how easily it is to stray from OOB!) 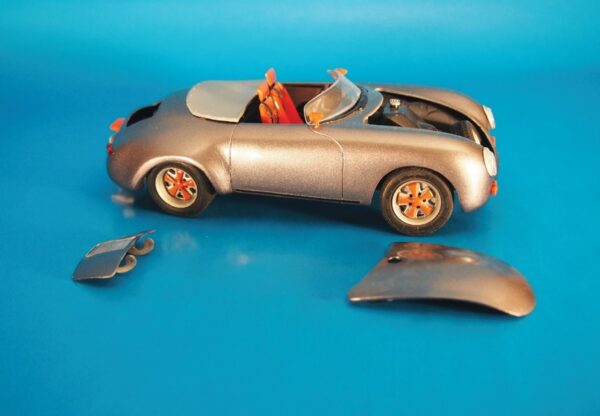 4) One of the fun things about modelling is you can either do the research and get the details just right, or you can build a fictional version of a car to please yourself. Here’s an example of a fictional car, a 356 done outlaw style, exactly how I would love to have a full size one! 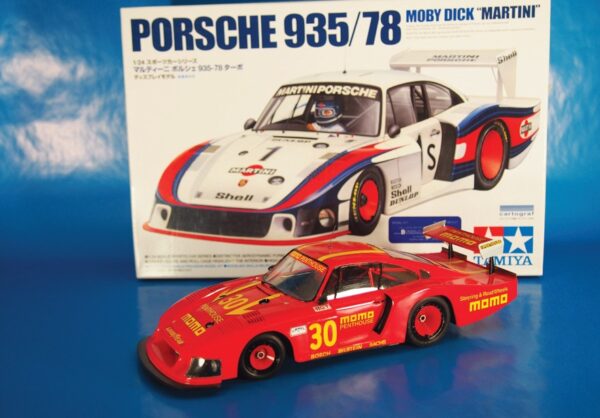 5) Here is a minor variation on an OOB with only a decal and rear wing end plate shape change. 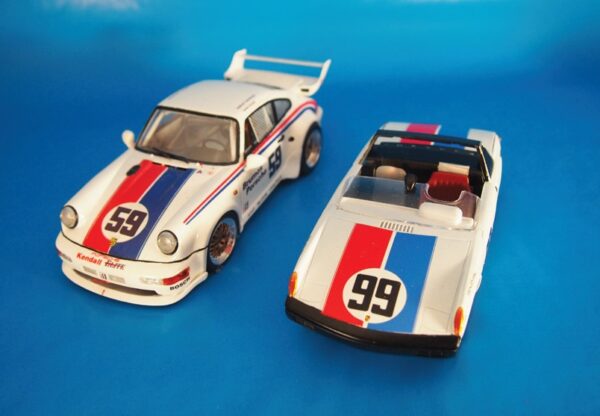 6) Of course no Porsche collection is complete without cars in the iconic Martini colours. The 911 is from Daytona in 1993 and the 914 is another fictional or phantom car. One very rewarding thing about building a replica model is doing the research and finding out interesting or little-known facts about a particular car, then working at getting the details correct on the model. The 911 wing is different than what was in the kit, so I made this one from plastic and brass and did some other body alterations. 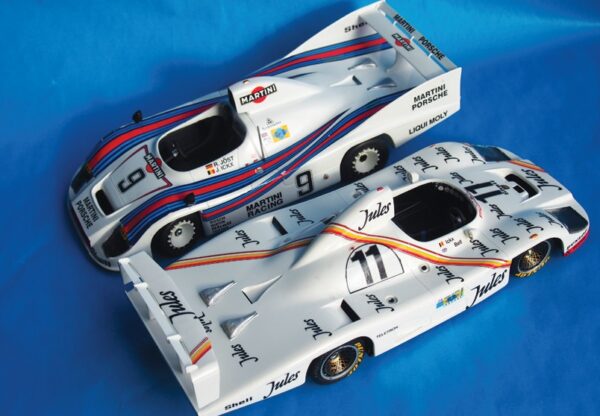 7) Here are two 936s in different configurations. The #9 car finished second at Le Mans while the Jules car finished first in 1981. Each of the Jules was placed individually on the model, which did take some time. 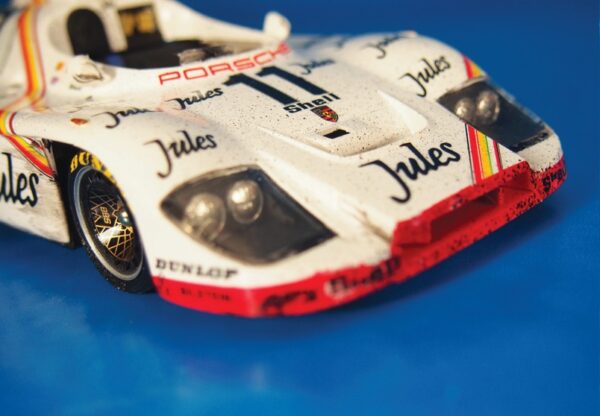 8) This picture shows the front of the Jules car showing the wear and tear of a 24-hour race. 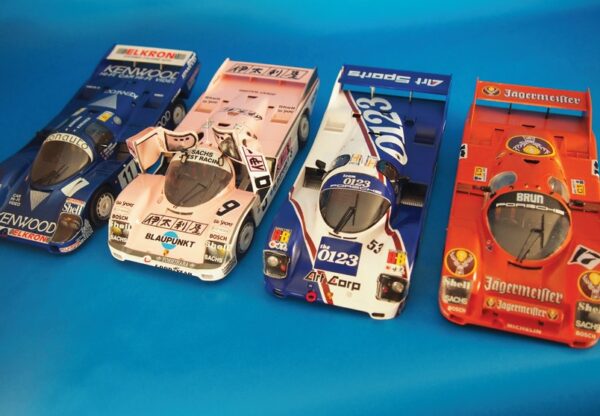 9) The Porsche 956/962 was probably Porsche’s most successful endurance racer. Porsche built over 130 and many teams with many different liveries raced them throughout the world. Here are four of the most colourful built from OOB, detailed with opening doors and cockpit. 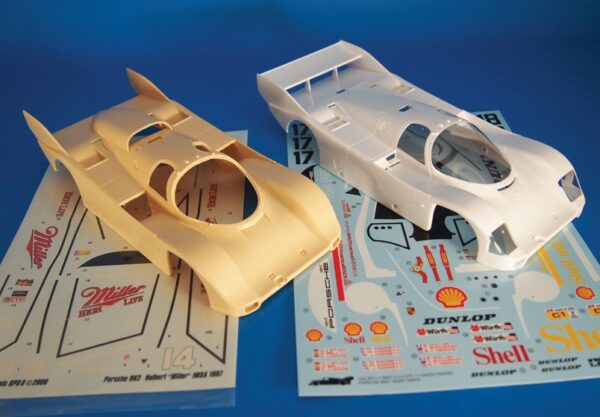 10) The 962 was raced in the IMSA series in America but no kit was made of that version. However a Canadian fellow modified the kit as shown on the right and cast it in resin as shown on the left. It is what is known as a “curb side” which means no opening panels, so it does not include an engine.

11) Speaking of endurance races, some of us will build a model during the Daytona or Le Mans 24-hour races. We open our boxes when the green flag drops and build until the race is over or we drop, whichever comes first. I’ve successfully completed nine twenty-four hour builds. The most important thing is planning before the flag drops. Just like real racing! This Flying Lizard 962 is a fictional eighties Porsche 962 in the Flying Lizard team livery as it raced in the American Le Mans Series in the early 2000s. With modern materials, I could paint the silver, let it dry, mask and paint the red while still having time to complete the build. 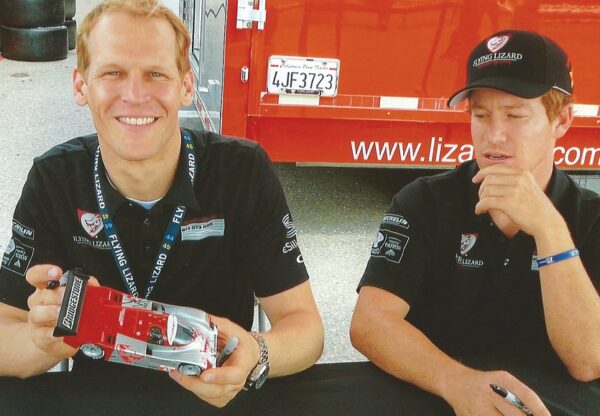 12) I took the model to Mosport to show the Flying Lizard team. Here is Jorg Burgmeister holding the completed model with Patrick Long looking on just before they signed it. Seth Nieman, team principal, also signed it. They were amazed that I could complete a model while they were racing for twenty-four hours! 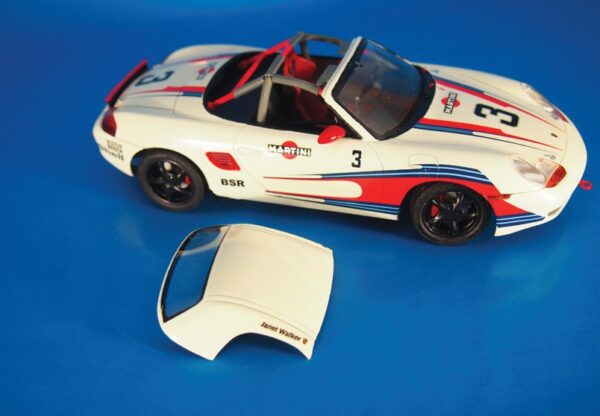 13) This is another fictional vehicle but it was built to conform to the rule-book for a Boxster series which ran in the US. I used a 911 front fascia and wheels, raised the spoiler and built the roll cage with brass and plastic. You will note that the driver’s name on the roof is my wife’s. (Trolling for favours maybe!) 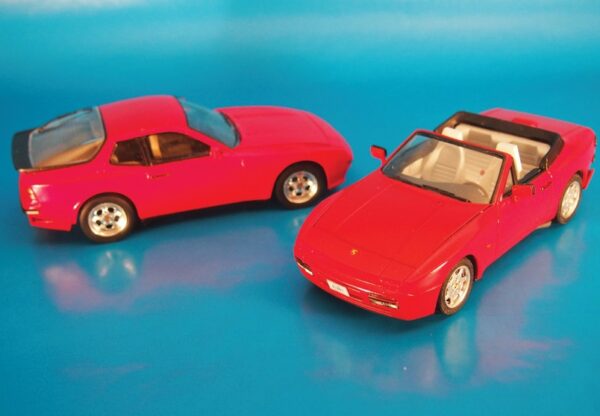 14) You can also build models of your friend’s cars. This was built for my friends John and Albine and includes their personalized licence plate. My extensive parts box of parts saved from other kits provided the proper wheels.

So will I keep building? Of course! I have about 50 un-built kits of Porsches and many more of other marques. On the horizon is a cottage industry release of the 1990 Porsche Fosters Indy car and the imminent release of a Porsche Junior tractor. I’m also planning replicas of my car in a couple of different scales.

Members’ Rides – All or Nothing