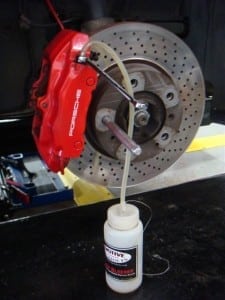 A while back I wrote of my dilemma with regard to allocating my limited disposable Porsche-related funds. Spend precious dollars the sensible way on a intermediate shaft bearing (IMS) upgrade, or blow the budget on brakes and wheels! Call it prudence versus exuberance. I have been somewhat-spooked by all that you read and hear about M96 engines essentially blowing up after the intermediate shaft bearing lets go without warning leaving you stranded with an expensive push toy. But on the other hand, I needed new pads, and why put plain-old stock pads in there when you can always find something better if not more expensive.

I spent a good many hours online gathering all the information I could on the IMS issue and the upgrade available in the aftermarket. The folks selling the upgrade, and any number of disgruntled owners who had experienced terminal-meltdown, were unanimous that I need the upgrade and that I need it right now. The problem with these posts is that there is a self-selection effect. No one goes online to tell you about the 200,000 trouble-free kilometers they have on their 2001 996. Only the spurned take the time to tell the whole world how they feel, so there is no way to really be sure how many engines have failed and the likelihood that yours will follow in their oily, smoky tracks. Porsche doesn’t help matters much. I don’t want to give the company too hard a time as they have replaced any number of out of warranty engines on a “goodwill basis” (it helps if you have spent lots of money at the dealer’s service department), but presumably they know who many engines have failed and therefore the probability of the M96 behind your seats doing likewise, but they’re not telling.

I spoke to a number of independent shops and both local dealers. I found the divergent reaction of the dealers to be interesting. I had someone at one of the dealers tell me that they would not have anything to do with non-Porsche parts and turn and walk away from me. I guess he figures that there are a sufficient number of one-time Cayenne owners to keep him busy. In fairness, the advisor I had previously dealt with did take the time to call me back and speak with me at length on the issue. The reception at the other dealer was the complete opposite. They took plenty of time, I spoke to the service manager, and they were willing to do the work with the understandable caveat that they could not warrant work done on non-factory parts.

Cutting to the chase, I have not yet done the upgrade. Consensus seems to be that while the consequences of a failure are severe, the probability is low. Changing your oil regularly, like every 5,000 km or every six months, supposedly helps. As does going with heavier-weight oil. It also turns out that the 3.2 in my Boxster S is rumoured to be the least-likely to fail. I feel quite eerie typing this as if I’m tempting fate in a, “this ship is unsinkable” kind of way. However, I still intend to do the upgrade but at a time when the engine is already apart, possibly when the car needs a clutch. Given that the 944 had traveled over 160,000 km on its original clutch when we parted ways and that the Boxster has only 74,000 km, it could be a while.

With that expense delayed, time for a brake upgrade! My pads were beyond shot when the car had gone into hibernation last fall. The 02 Boxster S shares brakes with the contempory 996. Given that 911s have always been noted for strong brakes, you can imagine how a car that is about 60 pounds lighter and with more weight on its front wheels, stops with the same components. Stopping power was never a problem. But, at the track I had started to notice that the pedal didn’t feel as rock-hard solid on laps eight and nine compared with laps one and two. This was especially so going into turn eight at the end of the back straight at Mosport, which, if you have been there you will agree, is not a great place for a mushy middle pedal. Apparently the really fast folks don’t actually brake here, they just lift a little. Clearly I’m not that fast/brave.

I hunted around and took some advice. I ended up checking into SportsCar Boutique, owned by club members Ilker and Isabel Starck. The prescription was Pagid Orange pads, stainless steel lines and fluid with a higher boiling point than stock fluid. It’s boiling fluid that causes brake fade. Contrary to intuition, it is not the force with which the pads are able to clamp on the rotor that determines braking performance, but rather the ability to absorb and shed heat as kinetic energy is converted to heat energy through friction. Sorry for the physics, the bottom line is higher boiling point fluid and pads that transfer less heat back through the caliper and into the lines equal less fade and better brakes.

As I found myself with some time off, I took a weekday morning and made my way up to the Starck’s shop in Thornhill. The facility is squeaky clean and the work took a couple of hours. I always find it comforting to see a garage full of Porsches as opposed to a collection of various German marques when I drop the car off for service, and SportsCar Boutique was 100% Porsche on this day. All in the cost was about $1000.00, including a discount for club members. I didn’t price out what stock pads would cost at a dealer, but given that every time I drive by a dealer it costs at least that much, I’m guessing that I made out okay.

I did my best to bed the pads in on the drive home which included stints on the 407 and 400. On the street the brakes didn’t really feel any different. However, the real question was how would they feel at the track? A couple of weeks later at the first UCR Driver’s Ed event I would get my answer. As expected, my novice seat of the pants couldn’t discern any increase in power. The improvement was only evident on the last few laps of each session when you have worked your speed up a little and the brakes have already been tortured repeatedly going into five and eight. Absolutely no fade. The same comforting Porsche hand-of-God (as in the hand-of-God reaches out and grabs hold of the car to slow it down) brake feel that we all know and love on lap ten just as lap one. Mission accomplished.