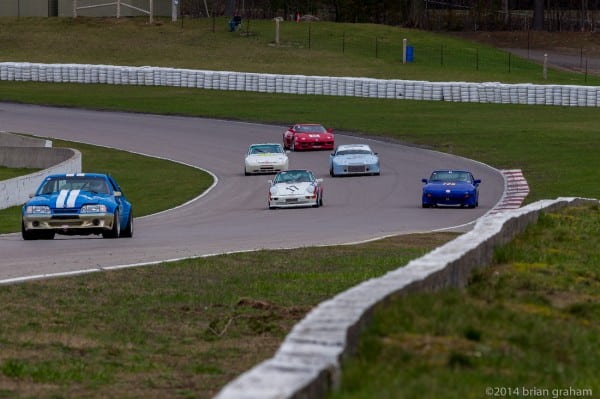 Climbing the backstraight at Mosport, I’m inching up on the 944T in front of me. As we approach the bridge I’m closing on him. My 911 is still accelerating as I pull alongside. The bridge flashes by. It’s the moment of truth, either back off now or go for it. I’m on his right, set up for the corner…no brakes, no brakes, no brakes…and I’m through Turn 8 ahead of him, squeaking by on the inside.

Suddenly he’s in my rearview mirror and I’m downshifting for 9, pulling through 10 and wailing down the front straight to acknowledge my checker.

That was the end of my last race for the first race weekend and there was actually some racing going on. That 944 and I had been trading the lead throughout the last two races. Most of the passing happened when another car was blasting through to lap us, and one of us could take advantage of the positioning.

But this time was different. It was just the two of us coming up the straight and it was the last lap, fuelling the sense of urgency. The decision to try the pass was a calculation based on my experience on the track, and feeling confident of the new sticky tires on the 911. I believed the car could make the corner at the speed we were carrying. I was counting on the space between me and the 944 not closing. And I made it through.

As a rookie racer I didn’t really expect to have any serious competition. I’d heard other drivers, my brother included, talking about running around at the back of the pack when they first started out, and how boring it can be.

But I was lucky in my first outing to have found a competitor who runs about the same speed as me. His car is definitely faster, but so far, in three races I’ve finished ahead of him twice. Once in the dry and once in the wet. I cannot wait to meet up again at the next race.

But before that happens, let’s backtrack a little and look at what it took to get here.

At first there was euphoria. After buying the car in February, I was running around showing off its picture to everyone—my new baby. I bought a racecar! Woo hoo!

Since getting seriously hooked last year, my plan was to buy a car and race it alongside my brother, Andrew, in the VARAC (Vintage Automobile Racing Association of Canada) series. The Martini liveried 911 was my gateway drug at the Indian Summer Enduro last fall (Living the dream—Driving the Enduro, Provinz, November 2013, page 24), and now it is mine. But time is short between February and the VARAC April test day, and I was quickly realizing how much I had to do.

I decided now was the time to finalize a racing team logo, and with the brilliant skills of Provinz Art Director Doug Switzer, I was able to present Andrew with a BBLS racing sign as a birthday gift in March. BBLS stands for Big Brother, Little Sister, and when you see the logo you’ll get the humour. I’ve been his crew chief in the VARAC series for a couple years, and now I’ll be on the grid beside him!

That’s about where the fun and games stopped and things got more serious. It seems a simple concept to buy a prepped racecar and take it racing. Don’t believe it!

When I bought the car, I believed I’d be able to drive it to the track. It had been plated and insured—as a former rally car it had to be able to transit open roads between stages. Sadly, this was little more than fantasy on my part. First, the car is so loud that firing it up before dawn on a Saturday morning to head for the track would have made me extraordinarily popular in my downtown neighbourhood—NOT. Second, combine its fetching good looks with the noise, and it would attract attention. Eventually some nosy officer would pull me over, get a look at the cage and other race car features and could possibly impound it.

Not wanting to invite trouble, I reluctantly decided a trailer and tow vehicle were in order. And with that I also needed a place to keep them. Finding the trailer and settling on a Ford Explorer were not too challenging. I now have a small, but light and lovely single-axle, aluminum trailer that just fits the car. It required some mods, but nothing more challenging than an hour-long session with a grinder and sawzall and Andrew’s “get it done” attitude to remove a storage box from the tongue.

What is a challenge is the loading methodology. Thanks to the 911’s weight distribution, it must go on the trailer backwards. The first time I tried this, I very nearly reversed the car right over Ian Crerar, the car’s previous owner, who was guiding me. Fine clutch and throttle control in reverse, up a ramp, is apparently a skill that takes a bit of practice to refine! The trailer now has a nice stop board for the rear wheels, and I have yet to crush my truck or anybody brave enough to ground-guide me. Happy to say that getting the 911 on straight has proved quite easy, and I am able to wriggle out the window, since the door is blocked by the trailer fender.

Once it’s on there, the car and trailer behave just fine behind the Explorer. This is my first experience doing any towing, so I’m being extra careful, I think. I’ve got a stash of spare 20-amp fuses for the trailer running lights, which need some proper attention to solve a short, and the trailer brake controller is a marvelous device.

Backing the rig around is getting easier. Where I store the car—at my parent’s house—requires a three-point turn in tight quarters, and I have to thank my sister Sara for great reversing instruction the first time I tried to park there. I’d probably still be stuck there if she had not been willing to hang around and help me. Thank goodness most race track paddocks have plenty of turning room.

Next time: Prepping the car, racing in the rain