Although last episode described the first race of the season, some details of the preparation for racing were skipped in the interests of space. Preparation, after all, is the key to racing. The poorly prepped car will surely fail. The well-prepped car—then it’s up to the driver to mess up.

For my 911 there were few issues to overcome. Seating was the first and most obvious. When I raced the car last fall, I was sharing with its previous owner. There is a significant size disparity between us, which required a thick foam pad behind me so I could reach the pedals. And then my left knee grazed the roll cage with every shift.

Obviously I would need a new seat. When I arrived for the fitting they had installed a beautiful, brand new halo style seat, in exactly the right position for me. (I had sent leg length and bent-arm measurements on ahead of time.) The catch was with the seat as far forward as I need it, there was no way that I could enter or exit the car with my helmet on. And in the event of a crash and possible fire, you want to be able to get out, and quickly! There’s no time to remove your helmet and Hans device.

With sadness I watched them remove the gorgeous seat. But the replacement they found was a perfect fit for me, and with it snugged up forward where I like it, I was able to easily get in and out with my helmet on.

To run with the vintage club your car has to be eligible in its class and pass all tech inspections. Although my car had run last year with the club, this year there were a few tech issues we were forced to correct. The front tow hook was deemed dangerous, and the replacement webbing was ineligible because it wasn’t made of certified material. Attempt number three—a hinged metal loop—got through tech.

Also rejected was the cutoff switch for the battery. That was a long piece of webbing running under the hood from the battery to just below the windshield. The webbing was deemed too stretchy, so we replaced it with wire, adding  a bright red tab protruding from the hood. There’s no denying it’s easier to shut the power off with the new set-up.

The second race weekend of the season for me was at Circuit Mont Tremblant in Quebec. My brother and racing partner, Andrew, had decided not to attend this year, so I was pretty much on my own. I trailered the car up from Andrew’s home near Gananoque, Ontario on my own before dawn on the Friday before the races.

At Tremblant, they require you to run the test day if you have never driven there before, and although it’s not cheap, I was ultimately grateful for the practice time. Tremblant is not an easy track, with many corners to recall and significant elevation changes that never show up accurately in other people’s in-car video, no matter how many times you review them.

Friday was a frustrating day. Driving at an extremely slow pace compared to the others on the track just made me question why, as a green racer, I had decided to make the trek to an unknown track without my team-mate!

But I did learn an important lesson. When you feel something different in the car, check into it. At one point during the day the car felt loose. It wasn’t pronounced, just an ‘off’ feeling that was really hard to put a name to. Fortunately, there was someone there who knew the car and was willing to take a look. When mechanic Drew Cameron jacked the car up he found a control arm working loose thanks to an only finger-tight hex bolt. With a quick tap and application of an Allen key the problem was solved; out on the track everything felt fine again.

A sticky brake pedal also netted me a handful of loose change (almost four dollars) and a pile of dirt from the driver’s footwell. It was such a pleasant surprise when a racer I had not previously met—Jason DiCesar—heard about my problem and was suddenly helping me dig junk out from under the car’s pedals with a screwdriver and a borrowed vacuum. It underlined how racing makes a community unlike any other. Everybody is willing to help out because they know how important it is for all of us to stay on track.

The racing at Tremblant was uneventful for me, although painfully slow. I never really did gain a lot of confidence there, and was feeling the heat, quite literally. At one point sitting on the grid waiting out turn to hit the track I was so overcome with the heat that I absolutely HAD to exit the car. The combination of heat, humidity, the racing suit and fumes left me feeling almost claustrophobic in the cockpit, so I pulled out of line and bailed. Inadvertently practicing for the proposed 15-second egress rule, I think I was out of there in about six!

I was so relieved when big brother showed up on Sunday to cheer me on and help me out. However, before he arrived, I did have plenty of assistance from fellow racers Stewart Brown and Chris Rupnick over the two days. They were both busy with their own stuff, and still made time to make sure I was ok. It feels like my racing family is expanding! 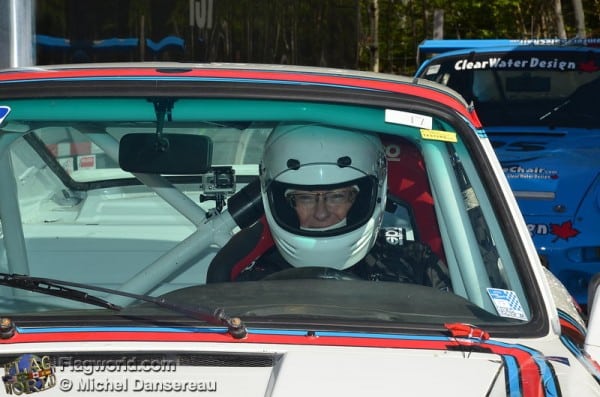