UCR’s First Rally of the Year
By Sajjad Butt; photos by Sadia Butt

On Saturday, June 23rd, we held our first rally of the year. It was a gorgeous day for participants to enjoy their Porsches and take in the beautiful scenery around the Forks of The Credit. We had 19 entrants, and nine cars showed up to enjoy the day. Drivers and navigators gathered at Midway Restaurant at 9am for registration, coffee and donuts. After the drivers’ briefing at 9:30, the Porsches made their way to the starting line. Even though this is not a speed based race, the roaring engines certainly conveyed the excitement of the day to come. Car #1, driven by David Black and Kevin Arnsdorf started the rally. They had a rough trip following route instructions and despite their trouble managed to enjoy the scenery and finish the rally.

The very first control decided the winning team. David Stewart and Mike Arthurs, in car #10 lost two points at control one, while car #5 of Ron Woodward and Jennifer Priestner lost four points. For the next eight controls, they both lost identical points. Sean and Sue Murphy, in car #2, had a steady drive, finishing 3rd. Consolation trophies went to Mark Solmon and Gulzar Butt in car #11, finishing 4th, and car #6 with Vince and Gianni Bennardo, finishing 5th.

Prizes were given to all, with t-shirts given to remaining finishers. Car #7 with Dave Smith and Jane Russo finished 6th; followed by Cairns Montgomerie and Lilly Boucher, who had a good run overall, except for two controls where they lost most of their points. Tim and Theresa Cusimano drove determinedly, never giving up, to finish in 8th place. 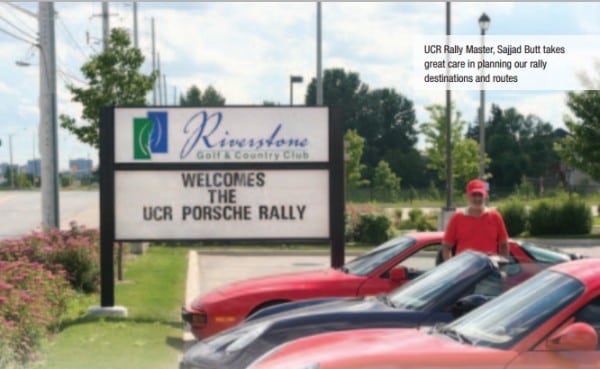 The rally finished at Riverstone Golf Club House. Thanks to Danielle French for posting reception signs for the UCR rally inside and outside the club; thanks to all the checkpoint volunteers, Mike and Sal Bertin, Karen Diplock, Passant Al-Sheikh, Mu-Xing Huang, Stewart Boland, Murtaza Naser and Gord Brik. Many thanks to family volunteers Sadia, Sabir and grandkids, Halah, Hiba and Mustafa. This could not have been done without them.