Tim Sanderson racing in May 2013’s kick-off event at CTMP, photo by ColourTechSouth

As Fun Run Chair, I have a helped members participate in Fun Runs. Last year, members gave their time and resources to host twelve of these easygoing, truly fun-filled driving tours, with over 400 participants.

At each event, spectators (a fitting pastime for UCR members) have an opportunity to get close to the race cars as well as converse with the drivers and teams. Some of the drivers, such as Shaun McKaigue and Tim Sanderson, have graduated from Porsche Club DE to Club Racing to Regional Racing to IMSA. These drivers, having fast cars and kind hearts, support Kids with Cancer and homeless youth through their racing events.

Each of these race events is a fantastic opportunity to see the car that we love driven to the limit.  Like a Fun Run—but at a much different speed—getting out to watch a Cup race is a rewarding pastime for UCR members. 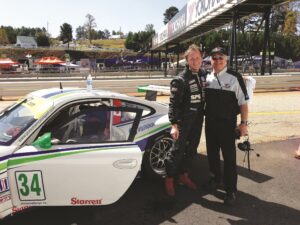 More info on the series can be found at: