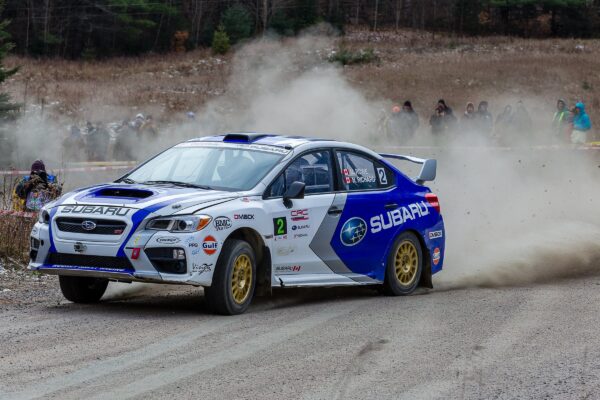 No, this is not an eye chart, or a mathematical equation, but if you’re reading it correctly chances are you’ve got both good eyes and a head for numbers.

And that still requires some translation because these pace notes are shorthand that a rally co-driver uses to tell the driver what’s coming on the road ahead. It communicates a lot of vital information in a very short amount of time.

I got a glimpse into the arcane world of co-driving thanks to the team of Jen Horsey and Ian Crerar who were competing at The Rally of the Tall Pines this year. Horsey is an accomplished driver and co-driver who generously let me read over her shoulder as she and Crerar reconnoitered the course the day before the race.

Recce, as it’s called, is an important part of the race. Teams are permitted to run the rally stages (road sections) at legal speed limits in a vehicle other than the race car. They work together to refine the pace notes supplied by the race organizers. 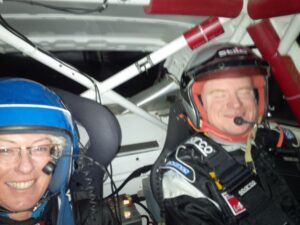 In the case of Tall Pines, Horsey said, the notes were originally written by two of the finest rally competitors in North America, so they barely need modification.

As I sat in the back seat of the pickup truck, Crerar drove as Horsey read the notes. Occasionally one or the other would modify a note, or add some detail to clarify notable locations.

At last year’s event Crerar (co-driven by someone else) ended up in a ravine on a particularly tricky corner (!deceptiveL5>3 “Caution deceptive left five tightens 3”) and wanted ample warning about the same spot this year. As they slowly drive the stage, they mulled over several possible alerts and settled on a firmly announced “THE corner” to remind Crerar it was coming. (The warning worked—they made it through that stage without incident). 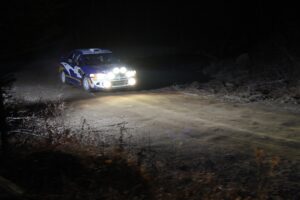 Special notes like that can mean the difference between crashing out of the race and a podium finish, especially when you are driving at speeds sometimes more than twice the legal limit on frozen, icy or muddy gravel roads.

I felt as though I was soaking a lot in, and towards the end of the afternoon we decided to try running a very short stage, first with Horsey reading, then me. This was the stage where rallycross events are normally held. It’s tight, with trees and high banks and a manmade jump in front of a bleacher.

Although there were no spectators when we ran it, I could feel the pressure. Even though we had been through it moments earlier with Horsey reading, for a moment I blanked and the symbols on the page might as well have been hieroglyphs.

A momentary brain fart like that can leave you in the ditch, or worse, but at best your driver will have to slow down until you can figure out where you are on the stage. And at night, especially, landmarks are deceptive.

I found out for myself later that day.

After the recce day teams can take a shakedown run through one short stage. Last year I had gone for a shakedown ride-along with Crerar at the Pines (the pet name for the race), but thanks to car troubles (see Provinz, January 2014) the ride was cut short. I was eagerly anticipating a chance for a repeat in 2014.

After the team had a chance to run the stage a couple times, working out any bugs in their communications and making sure the car was running well and set up correctly, it was my turn to give co-driving a real try.

Horsey gave me the two pages of notes for the short (3.5-km stage). She had penned a new note in the margin right after the start and made sure to read it to me before I got in the car.

Strapped in, borrowed helmet on, intercom working, I was told to ignore the trip-meter computer and just focus on the notes. The little reading light over my lap was just bright enough to read by, but I could still see outside, thanks to the bank of four super-bright headlights strapped onto the hood.

At the stage start we were checked for the correct wristbands, and directed to the starting line. A countdown “daisy’ light sent us off into the night with a roar and the clatter of spraying gravel.

I got the first instruction out, and then stumbled over the handwritten note. Thirty seconds into the run and I had messed it up. I could feel the rising panic that would ensue in a real race situation. The driver is now effectively running “blind” with only as much information as his headlights are able to provide. There’s no insight into what’s over a crest or around a bend in the dark. The shadows cast by those ferocious lights are very, very inky.

I scrambled to correlate the landscape to the notes. Not having been at the recce to see the stage and write the notes made it really difficult to pick it up, but eventually I was back on track, and just like that the stage was over.

My perfectionism made me beg to try it again. I had to have a chance to get it right.

Crerar humoured me and we drove around to the stage start once again. This time I practiced reading the notes all the way to the start. I memorized the handwritten addition.

Soon we were flying though the blackness again; this time I managed to calmly and clearly read each note, at close to a proper pace for our speed. I had a taste of how it should feel with each note followed by the sensation of the crest, bend or jump just described. There was a definite promise of flow and rhythm in getting it right.

And there’s no time to be scared when you are rally co-driving. The focus is intense. The symbols on the page, the road and surroundings and the driver’s actions and reactions to your words are everything.

When you’re this busy you don’t have the luxury of worrying about a crash—staying focused is what will keep you on the road and rubber side down.

As we finished Crerar very nicely told me I wasn’t the worst co-driver he’d ever had in spite of my complete lack of experience. Faint praise perhaps, but it was enough to encourage me.

This is a fascinating world. The challenge is intense; it’s mental and physical, absorbing, dangerous and exhilarating. You need brains, guts, a cool head and a strong stomach.

And you and your driver must have complete trust in each other. I can only imagine what runs through your head after a crash—and everybody crashes at some point. Once you know you are ok, what do the driver and co-driver say to each other?

Stay tuned; I’m sure there’s going to be more rally in my life. Which seat I will be reporting from in future remains to be discovered.

Thanks to Subaru Canada for the warm hospitality at the event. Their invitation to join the journalists covering the rally made this report possible.

Car 14 – Crerar and Horsey, in the 2001 Mitsubishi Evo 6, finished second in the 4WD open class at the Ontario regional event (OPRC), third overall at OPRC and eighth in the national rally.

Tall Pines was won this year by
Antoine L’Estage, co-driven by Alan
Ockwell in a 2011 Mitsubishi Evo
X. L’Estage also clinched the overall
Canadian Rally Championship, with
a record-setting win at every event
throughout the year.
Unfortunately the Subaru team of
Martin Rowe and Nathalie Richard
did not finish at Pines thanks to an
off near the end of the race. Their
2015 Impreza WRX STI rolled and
was damaged; they were both ok after
being checked out at the hospital.