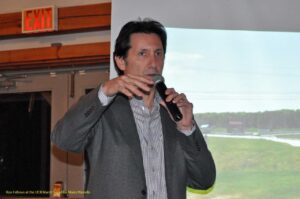 Tuesday april 13th,2012 was a lucky day for Upper Canada Region. Our guest speaker for our monthly dinner was the legendary canadian driver Ron Fellows. attendance at the Mimico Cruising Club was a sellout with additional dinner tables added. Ron is internationally known as one of Canada’s greatest ever drivers and you only have to google his name to see his many accomplishments. He began driving gokarts at the late age of fifteen before moving up thru various rides to become a General Motors factory race driver. Along the way he has won many championships in many different types of cars.

Today Ron is “semi” retired from racing and continues to juggle many hats. He is still employed by General Motors as their motorsport ambassador and also operates the Ron Fellows Corvette Driving School. He still drives in the various Nascar series on their road circuits but most importantly; to us, he and his partners have recently purchased Mosport Park. In purchasing Mosport they were subsquently approached by Canadian Tire Corp.; a nine billion a year revenue company, and Mosport was renamed Canadian Tire Motorsport Park.

Ron in his very entertaining way went on to explain that “Mosport” is now undergoing huge changes. The first occured late last fall  with the new tunnel under the track which will allow two large tractor trailer race car transports to travel beside each other under the track while also accomodating pedestrians at the same time. spectator areas all around the track are in the process of being smoothed out for better viewing. The partners are in talks with all major motorsport series; with the exception of “bernie”, to see what their particular requirments are in order for them to come to the track. Once that is known the track will then approach the F.I.A. for approval to any track changes that may be required.

Ron entertained us with stories about Le Mans which is one of his favourite tracks. He joked about “tech inspection” where all the cars are towed from the track into the town of Le Mans and shuttled thru five stages of inspection with the engines never being started once. Each driver also has his or her helmets,gloves,shoes,driving suits etc inspected. All this goes on while some fourty thousand spectators watch. Practice can then begin but not without ongoing contretemps. The 24 hour race has run for some eighty years and during that time the town of Le Mans and the organizing body ACO  have hated each other.  As a result the town will not shut down the local roads until 5:30 pm to “allow” everyone to get home. Since the race track is run for nine miles over the local roads this proves a slight inconvenience. And; of course, the roads are greasy and dusty so drivers dread being first out onto the track. One hundred degree daytime heat plays havoc with diet and hydration for the drivers. GM has dieticians,chefs and at least five doctors at the track to monitor and care for the drivers and team. Your weighed before getting into the car and weighed again after your two to three hour stint. The doctors even do a urine test to check your hydration. Clear you pass, cloudy start drinking or an i.v. to rehydrate.   As Ron said it’s a great week long party with a quarter million spectators watching on.

All together it was a great evening and when it was over we reluctantly ambled out to the parking lot to saddle up our Pcars !

Previous articleManual vs. PDK Part I 2012
Next articleSpring’s First Drive 2012

OBJECTS OF DESIRE – The necessary nemesis