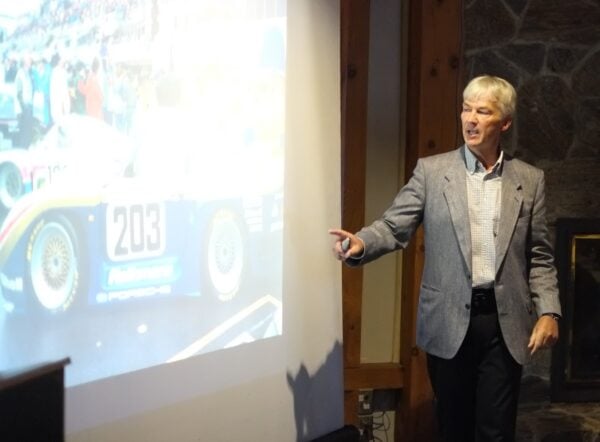 Kees Nierop was born in the Netherlands and moved with his family to Kelowna, BC at age sixteen. Motorsport beckoned and he began racing a Datsun 240Z. After a few learning experiences, he took it to the Canadian GT1 championship. His increasing abilities led to rides in other cars, progressing to an overall win in the 1983 Sebring 12 hour driving a Porsche 934. Driving a Porsche 944, he won the 1986 Rothmans Porsche championship.

More recently, he competed twice in the Trans-Siberia rally in a factory Porsche Cayenne.

Kees currently is employed by Porsche Cars Canada as a driving instructor at Camp4S during the winter, the Porsche performance school at Road Atlanta during the summer, and the Porsche Roadshow. He remains the only Canadian driver ever to drive for the Porsche factory.

We were thrilled to have Kees and his wife Lorie join us for the September Social and we wish them all the best.

Thank you to Porsche Cars Canada for sponsoring Kees to come out from BC to speak at our Social.

The evening ended with many UCR Club Members receiving raffle prizes, including two Street Survival School Prizes being awarded for the September 28 event.

A wonderful evening was shared by UCR members at Mimico Cruising Club.