Shakedown at the Pines 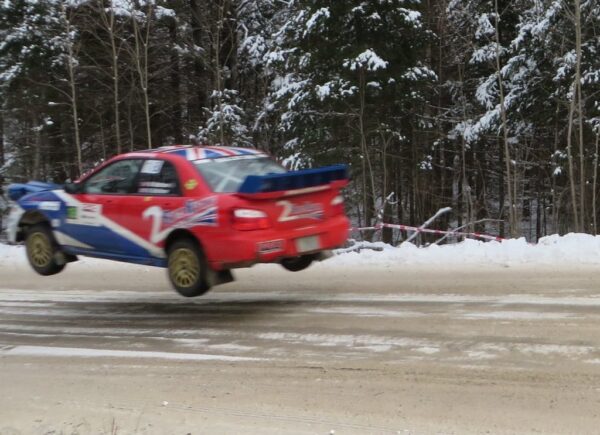 Rally cars have crummy headlights. Driving from the service area to the beginning of the shakedown stage it felt like we had two nightlight bulbs strapped to the front bumper. The road was little more than a dim concept in front of us, with maybe 10 feet of visibility. I mentioned this to my driver, Ian Crerar (Provinz readers will remember him as the owner of Clearwater Designs Canoes & Kayaks and the 911 we raced in the Indian Summer Enduro) and with the flick of his finger the forest in front of us lit up like an operating theatre. While not strictly kosher on the open road, those lights are sure sweet in a dark November night. Every pebble, rut and corner are illuminated in stark white.

I’m strapped into the co-driver’s seat of Ian’s Mitsubishi EVO VI, wearing a helmet borrowed from the real co-driver, James Drake. I’m bouncing around because the harness is too big. The helmet’s too big as well. Every bump and acceleration sends my head into the back of the helmet, then the helmet hits the Hans device and the whole thing smacks into the racing seat’s headrest. “Shakedown” ride could not be a more apropos description.

Not to mention that Ian’s car is misbehaving tonight. It’s the evening before the Rally of the Tall Pines starts, November 29, 2013 in Bancroft, Ontario. The teams have spent the whole day driving the stages and refining the pace notes the co-driver reads out to give the driver advance notice of where the road is going. The rally cars are not allowed out on the stages for this exercise, so when things got started up for the shakedowns, the cars had essentially come straight off the trailer. 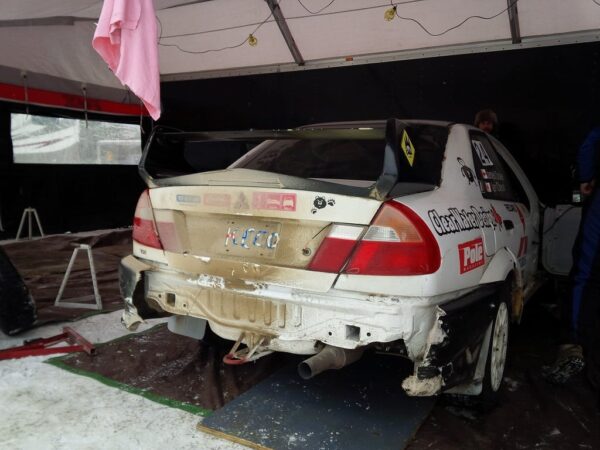 On their first trip around the short shakedown stage (2.85km) Ian and James came back to the service area on tow. The car had mysteriously died. At first a fuse was blamed, but when the car continued to buck and miss under acceleration it became clear something else was up.

My ride was to be next so I loitered around in my firesuit, trying to stay warm, but out of the way of the somewhat chaotic operations. Temps were dropping and there was snow on the ground. Teams work on the cars outdoors, without lifts, throughout the rally. There’s nobody tougher in motorsports than rally mechanics. Drew Cameron, who works on Ian’s cars, is a perfect example. Doesn’t seem to complain, works tirelessly in crappy conditions. He must have antifreeze instead of blood. 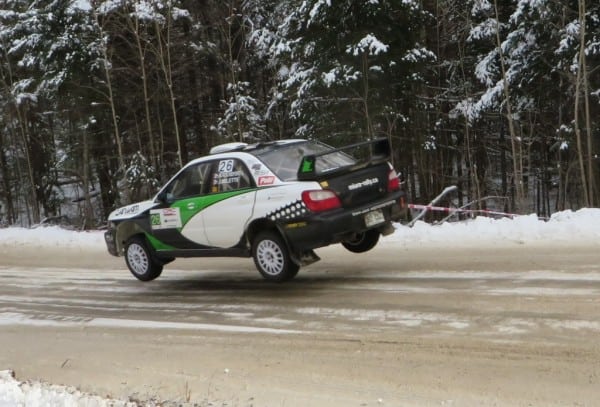 Finally they find some debris in the fuel. It gets cleaned out…maybe that will work. I get loaded into the car (getting into a race car through the cage is tough enough—try it in big Sorel boots, in the dark). We head out and before we even hit the main road, it’s evident the car’s still not happy.  Every time Ian puts his foot down, the car bucks like a horse with a burr under its saddle. It just won’t accelerate; max speed seems to be about 70kmh. We decide to run the stage anyway, since we’re here and I came to find out what rallying is all about.

Even with the car misbehaving, I can see the appeal. Whipping through the dark night with alien-spaceship-bright lights pointing the way for a hyper, turbo-charged car, deliberately sliding through corners and jumping on the bumps—it’s fast. Potential danger lurks at every dark corner. It’s the simple exhilaration of car and human pushing their limits together, in a less-controlled environment than the track.

And with that one, simple ride, rallying got its hooks into me.

For the spectator, a little work reaps vast rewards. Hiking through the woods at -20C to find the spot where the cars jump, or spray snow and gravel as they slide through a turn, or where they are most likely to come off the road, is worth every second of work to get there. Every minute or so another car comes flying past, and in an hour you move on the next good viewing place.

The rally race lasts all day and into the evening, with recce the day before. Cars and drivers cover hundreds of kilometres, divided into timed stages of varying length. The cars all have to be street-legal as well as fully caged and prepped for the abuse of sliding, jumping and sometimes hitting the ditch. While the stage roads are closed, competitor cars must transit between the timed stages over the public roads. Every few stages there’s a service period where repairs are made, back at the base. 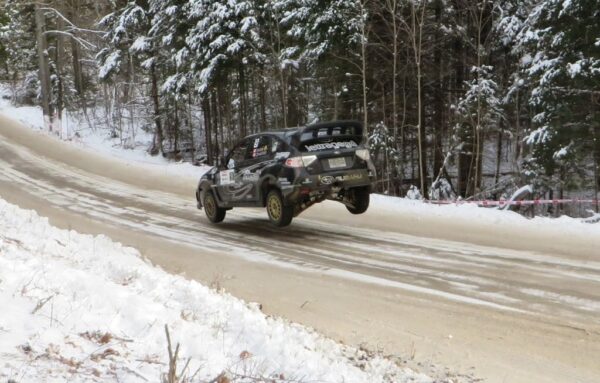 The service area is a just-kicked anthill to the uninitiated. Cars come and go, volunteers run about with paperwork. When a car comes back damaged or with a mechanical issue, crowds form to watch the mechanics—and sometimes the drivers—try to get them back on the road, usually in the less than 30-minute allotted service time. And overnight, before the race starts, generators are running and lights are on everywhere as cars are tweaked and the days’ emergency repairs are solidified.

The conditions can be brutal. Saturday morning it was -22C. Gravel tires disintegrate in the cold, giving up huge chunks of tread. Batteries die, lights fail, windows frost over and feet freeze. But not every year is this bad. Sometimes it’s muddy.

The rally is magnificent to watch, it’s a carefully orchestrated logistical tour de force, that runs like clockwork, thanks to the efforts of more than 100 volunteers. It’s got thrills, chills and spills, cool cars, slightly loony competitors and a carnival atmosphere.

As for Ian Crerar, James Drake and the Evo VI? By Saturday morning, the car was running fast enough that the team missed a corner and put it in a ditch during a morning stage. But they got yanked out and continued on—minus the rear bumper. Sadly, their shifter broke later in the day, leaving them to finish a stage in third gear and retire from the race. But it seems that’s what rallying is about. In the final hours of the race this year, the leaders of the race were eliminated by various mechanical issues, leaving the team with the best endurance on the top of the podium. 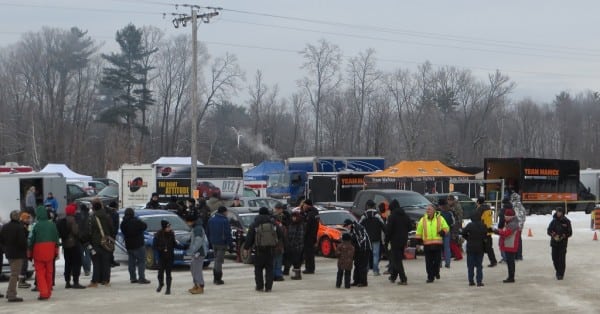